This may seem a bit unorthodox – traveling somewhere by plane considering this is a car blog. But I’m not so sure how Kia would have felt if I returned their Sportage with 4800 miles on the odometer. And besides, this is just a 36 hour trip… 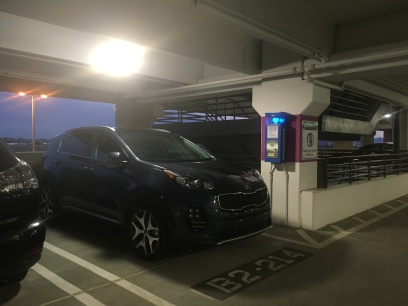 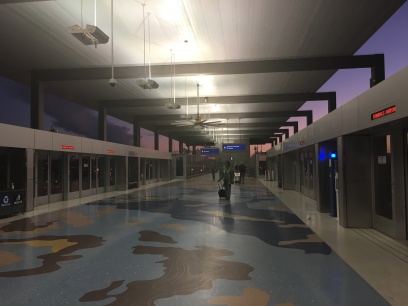 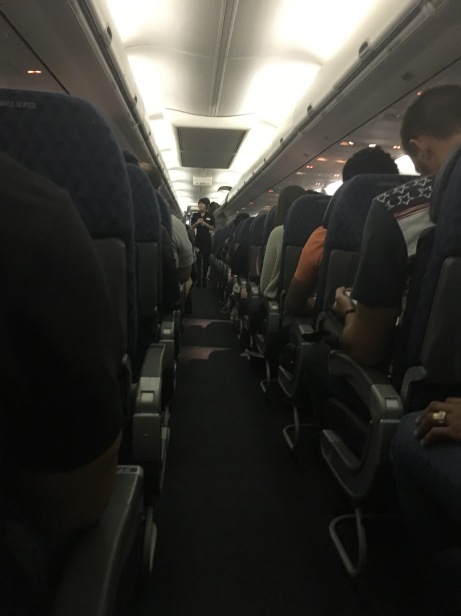 ITS A FULL FLIGHT ON AMERICAN

My flight takes me out to New York City for the weekend to visit my friend Lance, who has been out there for business the last few months. This was his last weekend in NY before he comes back to Arizona, so I needed to make a point to head out and visit. I caught the late night red-eye flight Friday night out of Phoenix, which put me in New York bright and early, 5:30am. With two hours of sleep, I set out to meet him at Grand Central Terminal in downtown – this meant I needed to take the New York Subway for the first time – luckily Lance had thoroughly planned my route and gave me precise directions as to which trains and connections I needed to take.

6:00am – this is no time to be wondering the subway system – it’s a bit eerie and daunting at first. But after five minutes I got use to my surroundings. Keeping communication with Lance, I was roughly 30 minutes and several stops away from meeting him – with each passing station I tried to get a text off to him as service would cut in and out.

LOOK WHO I RAN INTO

Once we meet up, it was like I just saw him yesterday – even though it had been two months. By this point it was 6:30am, we were both famished and looking for food. The weather was hot and humid already to say the least. Luckily Lance already had somewhere in mind for food, so we started our walk – can we take an uber instead? Being New York, I thought this town never slept, unfortunately for this place called Smith, they liked to sleep in – they didn’t open till 9:00am. So we wondered over to Ess-A-Bagel – which turns out to be a very popular New York destination. Needless-to-say I enjoyed my Apple Raisin with Apple Cinnamon cream cheese bagel.

From there it was time to start the day – no time to waste. One of the things I wanted to see was the new One World Tower and 9/11 Museum. Words cannot truly expression the emotional experience you have walking through this memorial – as Lance puts it, it’s very humble and endearing. They have several artifacts from the original towers from structural beams, columns and even one of the first responding fire trucks. 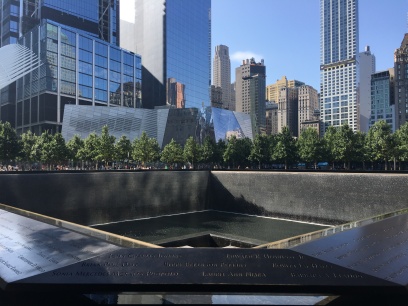 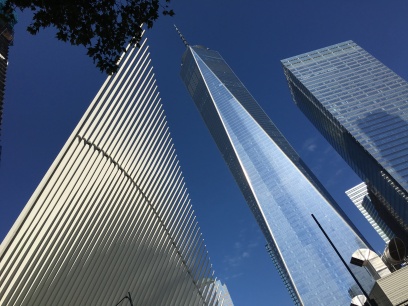 A FULLY INTACT STRUCTURAL COLUMN PULLED FROM THE WREACKAGE 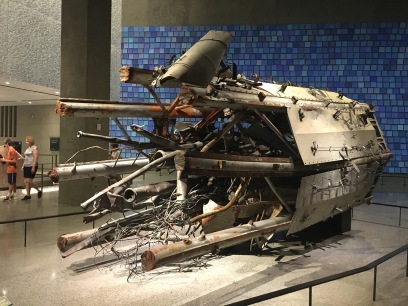 AN ANTENNA TOWER FROM ONE OF THE BUILDINGS 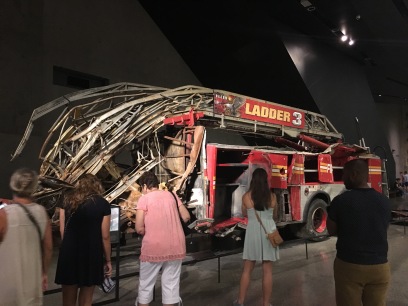 ONE OF THE FIRST RESPONDING FIRE TRUCKS WAS SALVAGED

Another popular destination which came highly recommended from my friend Rob was something called The High Line – it’s an abandoned railroad track that the city converted into a garden for everyone to walk through. Pretty nifty concept and use of abandoned resources. 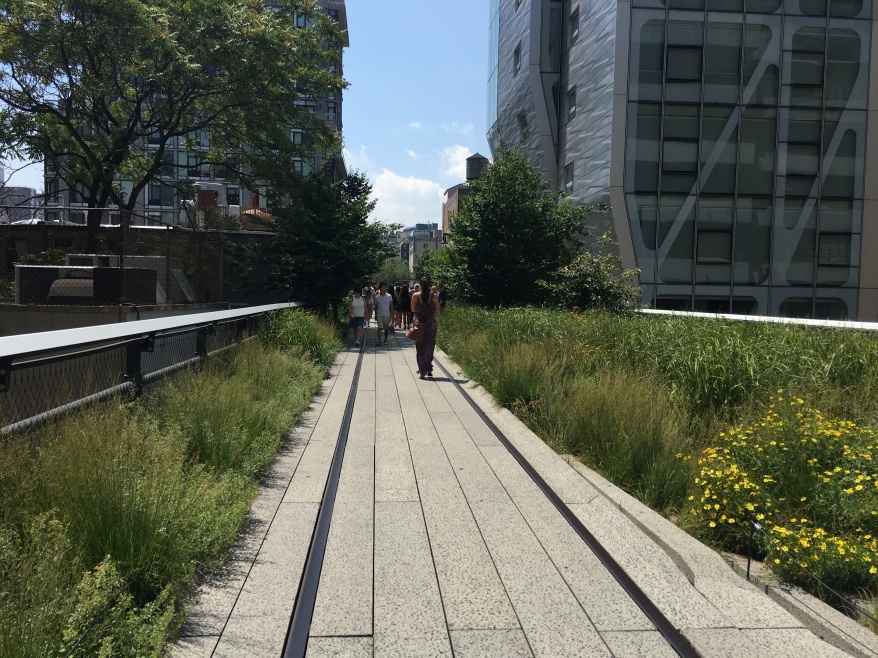 Because the weather was extremely discomforting, we started to feel the exhaustion kick in, especially after walking and traveling all over the city – a unanimous vote dictated we head back to Lance’s apartment – which was located north of Manhattan, in White Plains. This meant we had to catch two subway trains and a passenger train…

Two hours later, we made it back to White Plains where the rest of the weekend became much more relaxing and uneventful. We had gone to dinner at the Hudson Grille, where I had a seafood risotto and hung out with some friends playing several rounds of a card game called BS. When Sunday rolled around it was a take it easy kinda day – we moseyed on over to Connecticut to meet up with some other friends for brunch and toured around town. But again, the weather was a little too daunting for my taste, so we grabbed some FroYo, than an uber to head back to the White Plains to watch some Top Gear on Netflix before I had to head back to the airport… like I said it was a quick trip.

Now this is where things get interesting… Like any normal circumstances, Lance borrowed a friend’s car to drive the 45 minutes to take me to the airport – I checked in, grabbed some food and settled in for my 8:30pm departure. 15 minutes till our departure the plane before mine hadn’t yet left which put my plane delayed. No big thing happens all the time. After about another hour of waiting they finally decided to board us – not 10 minutes after boarding, an announcement from the Captain alerted us that there was a security breech and they started to evacuate the terminals – soon after the tarmac was flooding with passengers running away from the terminal. With several texts with family and friends who learned more than what our pilot would tell us, apparent shots were reported in Terminal 1 and Terminal 8, looks like I’ll be here a while. 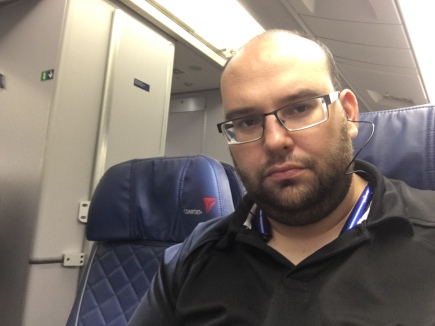 LUCKILY I UPGRADED MY SEAT AND DIDNT HAVE A NEIGHBOR 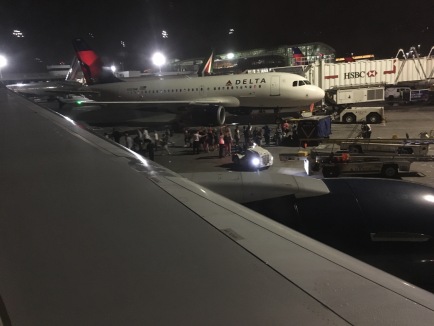 PASSENGERS STARTED TO FLOOD THE TARMAC

With every passing hour our pilot would give us a status update not revealing too much information. A new law had been enforced however that there was a 3-hour holding limit as to how long they could keep us on the plane, once the three hours came up, they told us to sit tight as they were receiving the all clear from the Air Marshalls and New York Police. All we had to wait on whether or not we could fly out – which about 10-minutes later discovered we were not and had to evacuate the Airport.

Once forced out of the airport it was every man for themselves, I quickly got onto the Fly Delta App and looked up my options… they weren’t good. The only available flights were 8:00am flights with multiple connections around the country. I took what I could connect through Baltimore, Maryland and Minneapolis, Minnesota. With that sorted, I looked up hotels so I could try and get a restful few hours in before the morning flight – after being told by the first two hotels that they were fully booked, I scrolled to the bottom of the list, called the Holiday Inn and to my advantage they had 1 room left for $200 – I’LL TAKE IT!

Getting the hotel was an adventure on its own – cabs from the airport won’t go anywhere close by – they’ll only go into Manhattan. After a few hasty exchange of words, I decided to call an Uber – it may have taken 30 minutes for them to get there, but it was worth not dealing with the cabbies attitude. By the next morning, it was an early one – the airport was crammed with thousands of travelers from the night before and had a 120 minutes wait time – my flight was in 90 minutes. Luckily the airport brought in reinforcements and security moved much quicker – the rest of the days was spent on planes hopping from one airport to another.

SECURITY WAS A NIGHTMARE

For what was supposed to be a 36 hour trip turned into quite an interesting adventure – an adventure I’d rather not experience again.