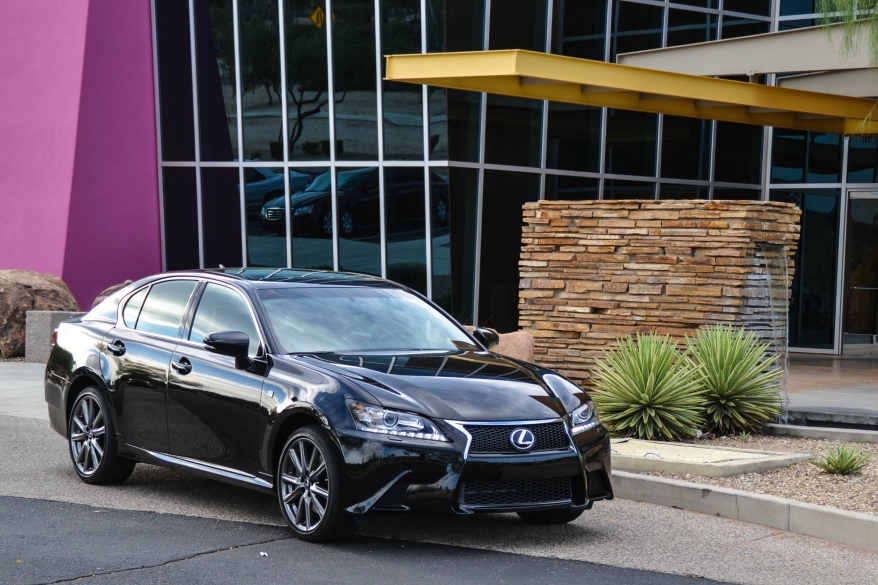 For a while now, Lexus has been attempting their endeavor at a mid-full size luxury sport sedan with their GS line-up. And over the years they have been mildly successful… with the luxury fragment. That is, until now! We believe they have cracked that code with their latest F-Sport technology.

Now, we may be a bit bias, as we have always found ourselves fond of the GS since the second-generation, launched in 1998. Over the years we have admired the GS growth and with this latest fourth-generation it simply looks brilliant. The fourth-gen was re-launched in 2012 featuring a fully redesigned exterior body – one of first to which incorporate Lexus’ spindle grille design and ‘swooshing’ LED daytime running lamps. 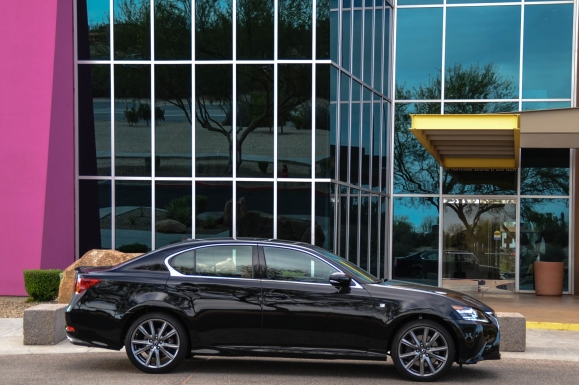 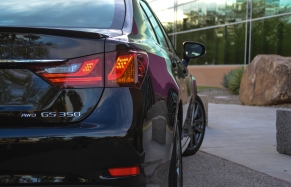 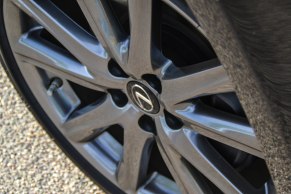 The GS350 F-Sport’s overall design is what we liked to consider discreet. While it carries a firm aura, it’s not ostentatious with the “look at me, I’ve got fins in every orifice.” Much is the same under the hood. The GS350 F-Sport carries a 3.5-liter direct injection V6 engine – the same engine found in the standard GS sedan. This 3.5-liter puts out quite a grunt as it cranks out 306 horsepower and 277lb-ft of torque. But, because our GS F-Sport was loaded with AWD we had to make certain sacrifices; like the 8-speed automatic in the RWD for a 6-speed in this AWD, we lose a tenth of a second off the 0 to 60 making for just 5.8 seconds, and to an electronically limited 131 mph top speed verses the RWD’s 144 mph top speed.

So what is ‘F-Sport’? Its more than a fender mounted badge and a snazzy pair of shoes! But to truly find out we need to max out its limitations. So we headed south to Willcox AZ, to a little track known as INDE which is approximately 2.6 miles long carrying 18 turns.

When you start comparing the F-Sport to the BMW ‘M’ junkies and Merc’s AMG lunatics, you will get a raised eyebrow. And sure, the GS F-Sport’s 3.5-liter 306 horsepower V6 cannot match up to the 400+ HP V8’s those emit. But power is meaningless if you don’t know how to control it… which we proved on the track by out maneuvering them. 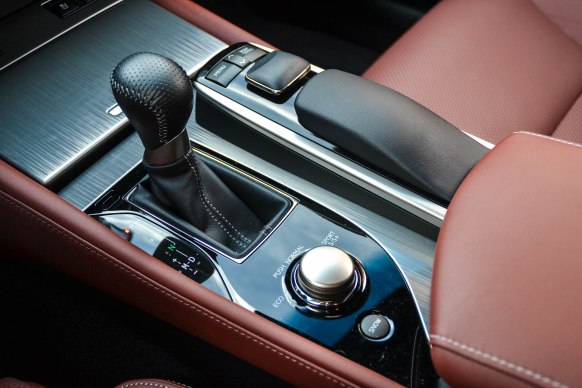 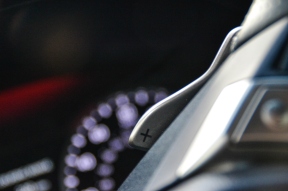 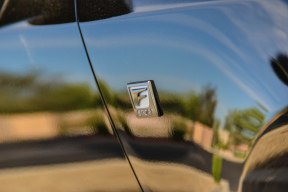 On paper, the INDE track looks humble, but once we did our first run, we came to an immediate conclusion that it wasn’t. This track ended up being a high speed track that not only would allow us to reach the limits of the GS, but the driver’s boundaries as well.  We engaged the ‘Sport+’ mode, which enhanced the GS’s F-Sport suspension and transmission mapping for harder cornering and crisper gear changes.

On the straight away, the GS’s 3.5-liter V6 was able to crank out almost 110 mph revving to almost 7,000 rpms and the large brakes provided a quick stopping distance for the first corner that needed to be entered. Being that this was a high speed track the AWD drive system started to come into play as we were reaching cornering speeds ranging from 60 mph all the way up to 100 mph – in the softer bits. But this is also where the AWD started to let us down. The AWD system was finicky and we really didn’t know what the computer system was trying to accomplish. Proceeding into a corner, we would experience a decent amount of understeer that was immediately followed by some over steer – this made for some tricky steering wheel maneuvering. We also find that our GS F-Sport with its All-Season Tires didn’t help either.

With the F-Sport tuned suspension, the GS still maintained a fair amount of body roll – even the spectators found it quite amusing watching the GS roll around. From the driver perspective it wasn’t that noticeable, but judging by our almost sick ride-along passenger, it wasn’t very pleasing. Also as the driver, the F-Sport included side bolstering adjustments creating a snug fit for those hard high speed corners. 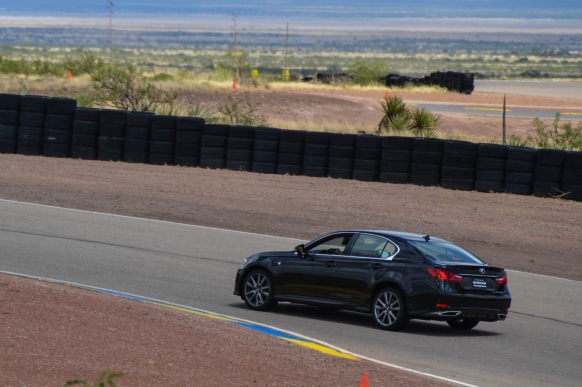 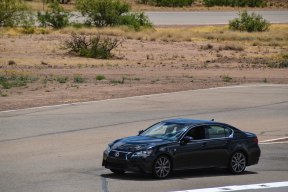 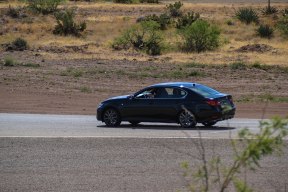 It was tough for us to tell whether or not we liked the AWD system on the track. In some aspects it worked well for us, while in other it was more of a problem than a solution. For track use, the RWD version would be more sufficient – and while the AWD provided us with jolly good fun, we suspect the RWD would be even more entertaining and quicker… especially since it will be lighter. And for the record, we were able to out-corner and out-perform a BMW M5 – though that was probably more the driver than the car.

Now, the track experience is not for everyone; and if you much prefer the design of the GS F-Sport despite its capabilities, you’re in for a treat. When left in ‘Normal’ mode the GS is smooth and comfortable – like driving on air. The large 19” wheels generates a fair amount of road noise, though easily forgiven through the comfortable steering wheel and light handling. There is even decent gas consumption, averaging 23 mpg combined on premium grade fuel.

Our GS F-Sport was stylishly appointed in Cabernet red perforated leather. This was nice a break from the usual black interior we’ve been so familiar to lately. Outside the driver seat being the best seat in the house, you can expect full comfort and luxurious amenities. With the optional F-Sport Package at a cost of $5,695, you’ll get: Rain Sensing Wipers, Heated & Ventilated Front Seats, Power Rear Sunshade, those snazzy 19” wheels, F-Sport tuned Adaptive Variable Suspension, 16-way Driver Seat, Aluminum Trim, Black Headliner, F-Sport Exterior Styling, Rear Spoiler, & Heated Steering Wheel… we think that’s all. 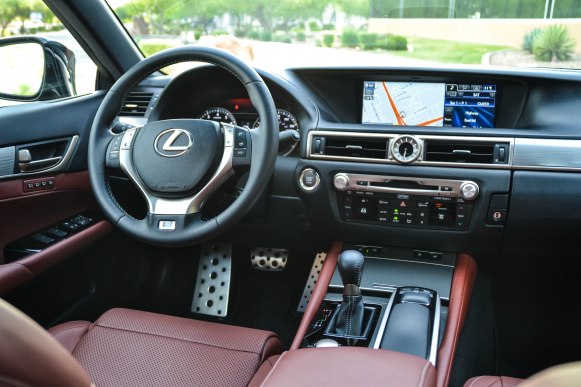 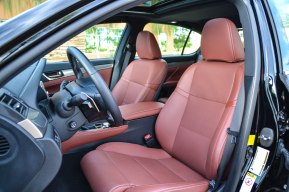 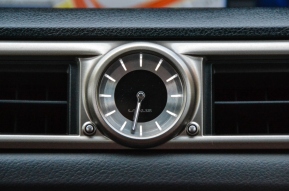 We find the overall interior styling is one of the best against the GS F-Sport’s competition. The contemporary styled dash wins us over with its appealing Striated Aluminum trim and Cabernet leather door inserts. The $1,735 12.3” Navigation display with Lexus Enform is top notch. The large screen adds presence to the interior styling and is easy to learn & use. And since most of everything can be easily controlled through the voice activation; the leather mouse interface almost seems unnecessary.

One of best things to the GS F-Sport is its comfort. The driver seat is superbly comfortable and with spending nearly 10 hours in this car, we had no complaints. The rear seats are just as comfortable, featuring a high mounted seat with excellent thigh support, there is plenty of leg room and head room for taller passengers, and even the rear headrest adds proper head support.

In the world of luxury sport sedans, we find that Lexus has nailed the GS with the F-Sport. While we favored the aggressive exterior styling cues and comfortable interior design, we did not care for the AWD system – that’s more-so for the snowier climate. On the track the F-Sport came into its own, out maneuvering the German rivals and even some of the V8 muscle cars. And what we liked most was that at the end of day after shredding the tires, you can park it outside a posh restaurant at the valet stand.