We’ve all known Buick to be our Grandfather’s sedan… now the Buick of yesteryear has been long gone and we’re left we something rather strange – a Buick that is not only stunning to look at but fun to drive. So what is this mysterious machine? It’s called the Buick Regal and for 2014 Buick has been doing some nipping and tucking to the Regal’s styling and performance refinement. So we’re left with is something rather interesting… a really good Buick! 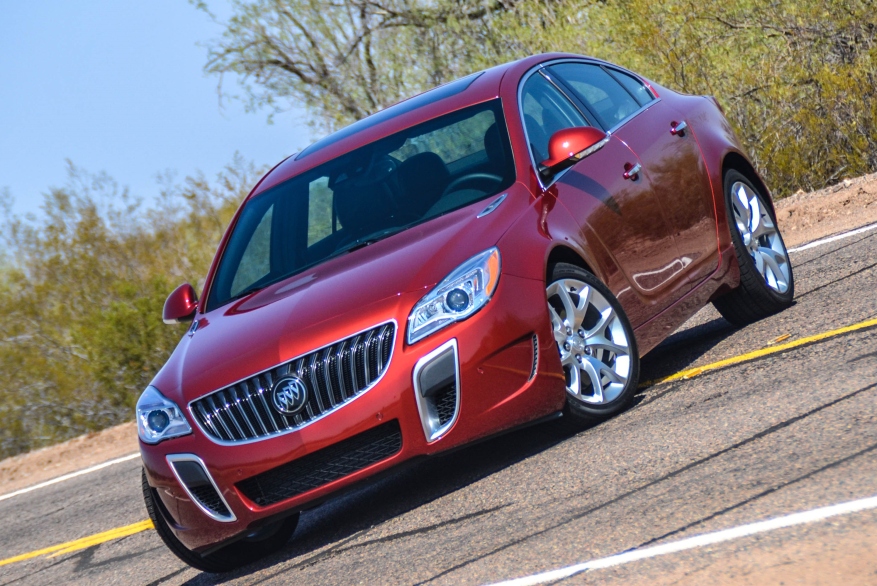 What we have here is the top trim level of the Regal – the GS. The GS is the performance version – at least it appears as such. Arrived in a sexy Copper Red Metallic the Regal GS frankly looks good from any given angle. Perhaps we have the Europeans to thank for that, after all they had some involvement in the development back in 2012 and if we’ve learned anything from them, it’s that they know a thing or two about cars.

For 2014 the Regal essentially remains the same from the 2012 concept. With the GS badging, it continues to offer a performance enhanced front and rear fascia that catches many passing motorist attention. So what’s new for 2014? Revamp HID headlamps with LED daytime running lamps and rear body wrapping LED tail lights – this bumps up the Regal’s attitude quite dramatically. And even though the Regal sports 19” alloys wrapped in low profile Goodyear sticky summer tires with large Brembo brakes tucked behind, this is still a Buick, and Buick is about the hidden touches of luxury. The blacked out waterfall grille for starters, the heritage must live on through the faux chrome hood vents and we especially liked the silver garnish found all over. 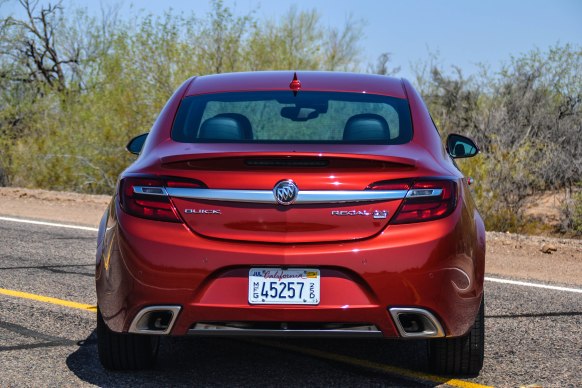 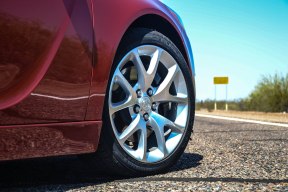 Most of the rework has been done to the interior. Buick has done away with ultra-complicated multi-button infotainment system and narrowed it down to a 7-button configuration connected to an 8” touch screen display. We say well done Buick! This new design cleans up the overall interior appearance and makes it much more sleek and attractive. Also updated was the large digital cluster display, only available on the GS model. These new designs are now easily controllable through the new steering wheel controls, which comes off a tad busy and complicated at first – after a while, it’s easy to navigate.

But now this is the “sports” version, and it cannot be sporty without the black leather interior, white pin stitched sport seats, carbon fiber accents, aluminum pedals and a thick leather wrapped flat bottom steering wheel. Probably would have never heard of Buick with a flat bottom steering wheel before. The front seats are relatively firm but well supportive with excellent side bolstering – driver and passenger have power adjustable seats with heated feature. Rear passengers will make the most sacrifices here with scarces leg room and the sloping roof line makes for limited head room and if pull out the cup holders, the seats make for a snug fit… for larger passengers. 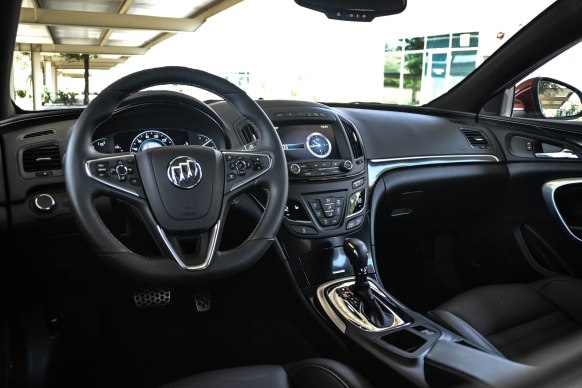 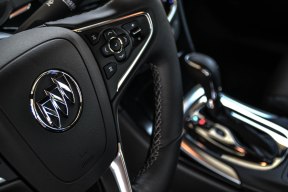 Buick’s new infotainment system is quite a good setup. The interface is intuitive and utterly user friendly. The 8” touch screen display has a good high definition output but with a subpar blurry reverse camera system. The voice activation software is top notch with a very polite woman on the other end – that’s always a nice touch. At first, we didn’t care for the digital cluster display, there are many options and menus to navigate through which we becomes distracting and some read-outs get repetitive, such as the battery voltage use and oil pressure. After a week of usage, we adjusted our opinion; its still cumbersome to use though given more time it would grow on us.

Underneath, Buick did some performance refinement and added a new all-wheel drive platform. There’s a new engine connected to the GS; it’s a 2.0-liter turbocharger direct injection four-cylinder. At maximum boost, this engine cranks out 11 less horses than the previous-gen for 259 horsepower. Torque does remain the same at 295 lb-ft; staying at the top of its class against its top rivals. The GS is available with a six-speed manual transmission if you opt for the front-wheel drive, since our tester has the new all-wheel drive; we are stuck with a rather good six-speed automatic.

The new Haldex all-wheel drive system is an interesting configuration that can pump up to 90 percent of its power to the rear wheels at maximum performance. This gives the Regal more of a RWD feel without the RWD attitude (aka oversteer). This also allows the Regal to perform a lot like a sports sedan – you lose a lot of that understeer from a front-wheel drive system. More noticeably is torque steer – a FWD car with 200+ hp is like dosing a Chihuahua with Red Bull – it will just go bonkers. But this new AWD system changes all of that and what you’re left with is a rocket launcher between your legs that takes you from 0-60 in just over 6 seconds. Not to worry though, the large Brembo brakes will stop you just a quick. 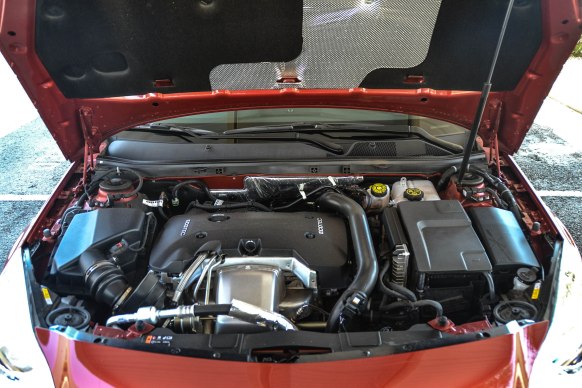 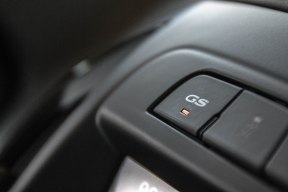 The great thing about the Regal is that it still drives like a Buick. The cabin is quiet and relaxing. The suspension is smooth and forgiving. Handling is excellent through the superb steering. Now, if you’re like us and want to be uncomfortable and living on the edge; with one push of a button, all of that can change. Engage the “GS” button and the suspension system stiffens to a crisp for cornering ability, the steering tightens for precision, the throttle sensitivity is kicked up to 11 and the gear changes become sharper. Overall, it becomes a different car… a very fun car. If that’s too much for you, there is a “Sport” button that allows to have a little bit of fun without the compromise of comfort. And as for an AWD car, the Regal is not bad; we average 20 mpg city and 26 mpg highway with over 450 miles on unleaded plus fuel.

There are just two problems we find with the Regal. First, its price; our tester arrived with a sticker of $39,270. And that’s before options; add the $890 Driver Confidence Package #1 (Lane Departure Warning, Memory Driver and Passenger Seats, and Blind Zone Alert), $1,695 Driver Confidence Package #2 (Adaptive Cruise Control and Automatic Collision Preparation) and $1,000 Power Sunroof for a grand total of $43,780 – that’s becoming Cadillac ATS money. Second, its name; and there is nothing wrong with Buick, but there will be that moment when someone asks you what you drive, and you have to explain that it’s not just a Buick, but the sporty one. However, once you peel back the badges, the Regal is one fantastic sedan that is an absolute joy to drive.