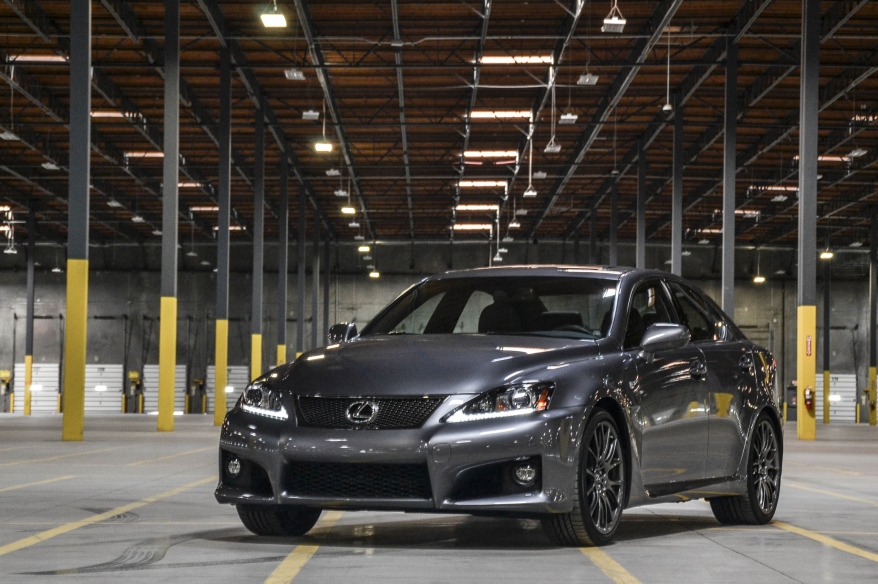 Before we take a step forward, we must take a step back. Back to a time when Lexus’ main consumer was retired, living out their days on a golf course in Florida. The year, 2008; this was when Lexus started to gradually fail at producing cars consumers didn’t necessarily desire. That was until someone went and fiddled around the parts department and found an ‘F’ badge. They slapped it on the back of their top selling IS sedan, added a big 5.0-liter V8 under the hood, threw on a few other performance parts and generated something that had BMW M3 drivers quivering in their overpriced training shoes.

Fast forward to 2014 and the IS-F continues its track record; however, it is currently only sold under the previous-gen model. To the average driver, the IS-F is nothing special. Seeing one coming up from behind in the rearview mirror with its sharp LED daytime running lights and average looking fascia, it won’t leave you wanting a second glance. But to a performance enthusiast, it’s a different story. The 19” BBS forged alloy wheels for example, they’re not just there to look good, they are strong and light weight for better handling. The front body is flared to fit the wider tires and the large Brembo brake package and the carbon fiber rear lip spoiler pushes the rear wheels down for better grip. The IS-F does come off as a poser though; the side brake vents, those are fake… and the vigorous quad exhaust, those are fake too. However, the big hearty 5.0-liter V-8 that lives under the bonnet, that’s real. And boy does it pack a punch. 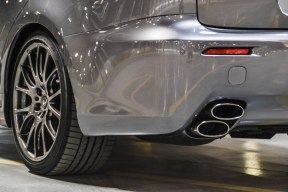 So let’s talk power: 5.0L Direct and Port Injection V-8, 416 horsepower, and 371 lb-ft of torque. 0-60 mph: 4.6 seconds and top speed: 170 mph (if you’re brave enough). To make sure everything is kept in check, a TORSEN Limited Slip Differential and an 8-speed automatic transmission have been added.

It’s difficult to physically describe the way driving an IS-F feels. The moment you engage the push button start and listen to all eight cylinders firing is like being a kid all over again and seeing your first naughty magazine. Your heart races and you get that nervous feeling. Then you find yourself sitting at a red light with no one else around and that instant the light turns green, it’s just you and the car, and a massive snarling growl pumping through the exhaust as it surges pass 3,700 rpms. The power is intoxicating! Acceleration is instantly transmitted to the rear wheels and as you reach the maximum of 6,700 rpm the lights on the dash light up like a Christmas tree.

Under normal driving conditions, this IS-F is still a Lexus, and drives as such. But that moment you chose ‘Sport’ mode on the thick leather wrapped steering wheel and start shifting through the faux stainless steel paddle shifters, the IS-F becomes an angry disdainful hooligan. As long as you keep the traction control on, it can be tamed. The TORSEN Limited Slip Differential helps keep the power in check while the front double wishbone and rear multi-link suspension system provides minimal body roll when going into a corner. The handling is absolutely superb, you have a sense of where the wheels are pointing at all times. The IS-F setup has been dummied down so that everyone can drive it. If you’re brave enough you can get it to seriously misbehave, but the traction control steps in and sorts out the rest and gets you back in line before you hurt yourself or more importantly, the car. There is a downside however with the 8-speed transmission, it leaves to many gears for the system to shuffle through and takes a second and a half before it finds the right one. 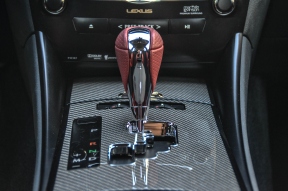 With something that can achieve 170 mph, you would need some really good brakes. The Brembo Sourced Ventilated Disc Brakes are here to take on the task: 14.2-inch in the front and 13.6-inch at the rear. These brakes work great on the track, but for everyday driving they get a bit touchy and sensitive when stuck in bumper to bumper traffic. That’s probably being a bit nit-picky. Overall the IS-F is a good every day hot rod. Even with the rock hard suspension; the IS-F is comfortable, its quiet, and relaxing. It maneuvers around like a normal IS sedan. However,  we won’t bother mentioning our fuel averages; frankly we didn’t care how much it took to make that euphoric noise. But if you’re interested in EPA figures 16 / 23 / 18 is what it should average on Premium fuel with roughly 250 miles on tap.

If you thought the exterior was a tad show-offy with its big exhaust, big wheels, and side gills – just wait till you see the interior. Lexus uses an attractive mesh-mosh of black and red leather trimmed ‘F’ Spec Sport Seats with perforated black suede and the dash is lined with a sliver carbon fiber metal look. Being that this is a Lexus, there are still the comforts of a luxury sedan. As you slide into the sport designed seats, you are cocooned in comfort with excellent side bolstering, 10-way power adjustable seats and a heated feature. You get dual-zone climate control, power tilt/telescoping steering wheel, and out tester was upgraded with the $3,410 Navigation system with Mark Levinson Premium Audio and Lexus Enform with its series of Apps – which is always one of favorites. 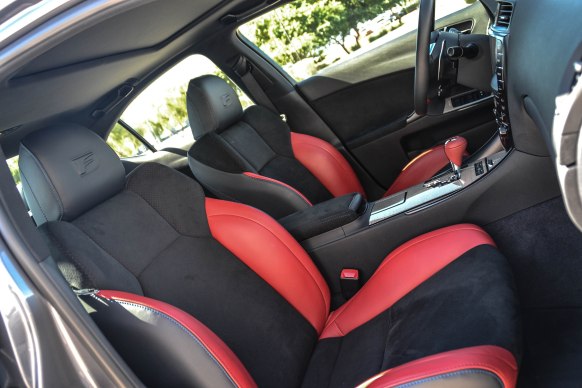 Because the IS-F is sold as the last-gen model, you get the last-gen problems. One of those issues: there is no room in the back – it’s even worse now with the rear sport seats and plastic center that separates the two. You only get one cup holder, and everything thing on the dash from the infotainment system to the instrument cluster is showing its age.

Nearing the $70,000 mark, the IS-F is asking for a lot of forgiveness. We’re willing to go back as far as 2012 and say it was worth the price then. But in this new generation of advance technology, its M3 rival will leave the IS-F in its dust. It does sadden us to say that after 2014 the IS-F will hang its hat up for retirement. The IS-F has gifted us with so much enjoyment over the past six years and has of course left us with its F-SPORT off-spring. The good news is the new, much more advanced Lexus RC-F will gladly be taking over. We are by far looking forward to that one.