As the summer here in Phoenix starts to crawl to an end, we found ourselves in the hot seat of the new 2015 Volkswagen Jetta TDI 6-speed manual driving through Downtown Phoenix, and as we viewed the sun setting through the tall skyscrapers, we couldn’t help but think “this is rather a really fun car to drive.” Volkswagen and the Phoenix Automotive Press Association invited us out for a quick Ride & Drive and Presentation on the newly mid-cycle refreshed VW Jetta. And at first glance, this slight rejuvenation illustrates the Jetta in a more grown up fashion.

For 2015 the Jetta is receiving a mid-generation update since its original transformation in 2011 – this new update brings out some slight body changes, new driver assistance packages, and better refinement to the engine and chassis department. As for appearance, VW gave the Jetta a wider stance appeal with a redesigned radiator grille, a new sleeker attractive front bumper and a silkier trunk lid with restyled taillights. Due to a high consumer interest, VW is now offering HID Bi-Xenon headlamps and LED daytime running lamps on all trim levels as an optional extra. These little changes add up to a more handsome, mature Jetta that consumers can now enjoy. 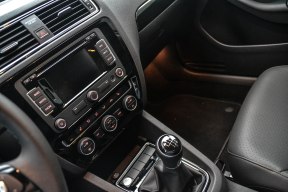 Continuing the update, VW has added a driver assistant package featuring Forward Collision Alert, Parking Sensors, and Blind Spot Monitoring – items that aren’t highly available amongst the compact segment. VW also did some interior refinement and improvements adding a much more attractive interior cabin with a mish-mosh of piano black and silver accent trims, as well as reworked the center infotainment stack configuration. Similar to Audi and higher-end Volkswagen’s, the Jetta now incorporates ‘tunnel’ like gauges for a more premium driving experience and now standard on all trim levels is a new multi-functional steering wheel with Bluetooth Connectivity.

While the new appearance will get prospective buyers through the dealership doors, what’s been done under the hood will have them signing the paperwork. The Jetta will continue to offer 5 engine options: 2.0L Base, 1.8L TSI, 2.0L TSI, 2.0L TDI, and 1.4L TSI Hybrid. However, we are here to look at the Jetta’s new 2.0-liter TDI engine – code note EA288. While this new 2.0-liter shares the same displacement as the previous engine, it is all new, minimizing friction within the engine itself and boosting horsepower from 140 to 150 while maintaining its lb-ft of torque value at 236.

A carefully planned 2-mile route was laid before us just to give a taste of what the new TDI had in store. Our first impression was a positive one, the 236 lb-ft of torque comes in early at 1,750 rpms which gives you all the power you need to get up and moving. With the six-speed manual, the driving dynamics is enjoyable; the engine grips to the gear like a bug on a windshield which improves acceleration and overall performance. Due to strengthening support in the chassis and frame, handling is notably improved and sturdier for a more confident driving configuration. Most importantly, VW had their eye on fuel consumption improvement.   Whether you opt for the 2.0L TSI or 1.8L TSI with a 6-speed manual or the 6-speed DSG automatic, fuel consumption increases to roughly 25 mpg city and 37 mpg highway. Choosing for the 2.0L TDI engine with either the 6-speed manual or 6-speed DSG transmission, fuel consumption increases to an impressive 31 mpg city and 47 mpg highway – roughly.

With pricing starting at $17,325 for a base trim model with a manual tranny, marks it competitive amongst the competition. For the more premium buyer, the TDI’s and TSI engines start in the low $20k area and can start ticking into the high $27k-$28k after a few toys are added. What started out as one of our least favorite of the compact sedan segment, the Jetta shows great improvement with this mid-cycle update. We shall determine our final assessment once we get behind the wheel for a little bit longer.