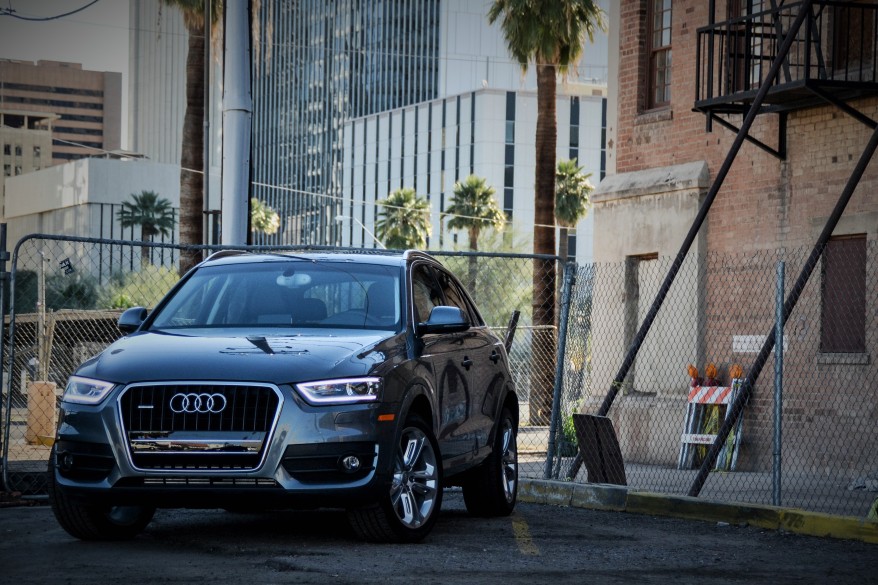 It would appear as if someone over at Audi has gotten a hold of a copy machine, scanned in the Q5 and scaled it down by 25%. A brilliant new concept was born and today we have been graced with a new baby-ute Audi Q3. Just what we need, another small premium SUV to trump the shopping mall district, hauling its Starbucks-holic driver, hogging up two parking spaces because there’s a sale at Barney’s. After spending a week behind the wheel, there is more to this Q3 that meets the eye.

This new Audi Q3 is no stranger to other parts of the world, after its success, the US gets a taste of what other countries have been enjoying. The Q3 is designed to take on its usual German rivals, the BMW X1 and Mercedes GLA – and as we have been experiencing this week, it should make an impressionable dent on their sales figures over the next several quarters – we find it to be that good.

Starting at $34,600 (before the $925 destination charge), some might think the Q3 is a tad expensive for something that starts in life as a Volkswagen Tiguan – don’t be so quick to jump to conclusions. This Q3 comes with an extensive list of standard features as well as the typical Audi premium interior and sophisticated looks. Most importantly though, unlike the Tiguan, the Q3 was given an overhaul of strengthening beams and additional welds for a stronger, sturdier chassis – this of course makes it heavier, but we’re willing to carry some extra weight for better driving dynamics. 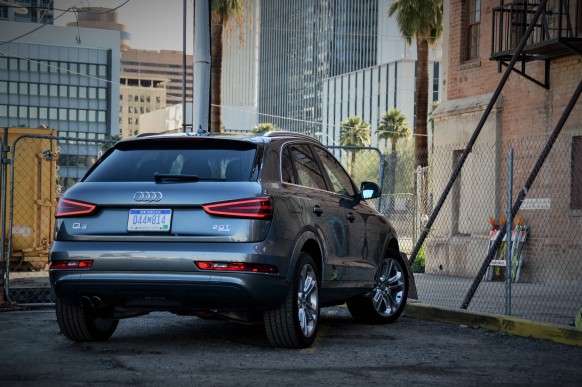 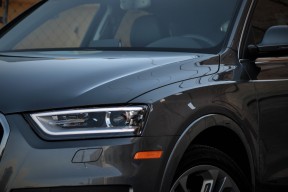 After being painted in a $550 optional Monsoon Gray Metallic paint, our sampled Q3 arrived as the base Premium Plus 2.0T with the Quattro All-Wheel Drive ($2,100). Being an Audi, the Q3 carries a business-like aurora – the standard Xenon headlamps with LED daytime running lamps are very sharp and the LED taillights mimic the aforementioned LED Daytime Running lamps for a streamline, elegant glow.  The available 19” double spoke wheels wrapped in all-season tires ($800) adds an eye-catching premium look that fills the wheel wells quite attractively over the more basic 18” alloys.

Under the hood is an industry typical 2.0-liter, turbo-charged four-cylinder engine cranking out a fair amount of horsepower; 200 over 207 lb-ft of torque that is being delivered to all-four-wheels. Unlike other Q3’s sold around the world, our Q3 is fitted with a torque-converting six-speed Tiptronic automatic transmission over the dual-clutch found elsewhere. We haven’t been completely sold on a dual-clutch set up; so we find the Tiptronic in the Q3 quite good and receptive to the driver’s needs.

Weighing in at 3,700lbs, the 2.0L turbo has to put in a bit of work to get from zero to 60 in under 8 seconds – it may not be as quick as some of the competition, needless to say, the Q3 has no problems keeping up with the traffic hustle. Same goes for the other end of the scale when it comes to stopping at 70 mph. Whenever, you aren’t in a rush to that Barney’s sale, the Q3 will take you where you need to go in a quiet, comfortable manner. The chassis is one of the best chassis fitted to an SUV, the suspension is soft enough to drink your Starbucks on the go, but firm enough so you precious cargo doesn’t slosh from side to side. Whether you’re a two finger driver or a two hand, nail digging gripper, you can be sure to enjoy the Q3’s driving dynamics from the relatively responsive, light steering. The steering provides a good balance of comfort for low speed maneuvering with a good range of feedback at higher speeds. 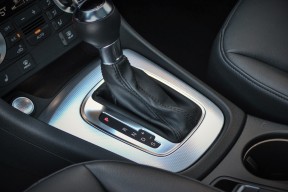 While the Q3 may look like a lifted hatchback version of the A3, bear in mind it is an SUV, which mean you get SUV styled fuel efficiency. Rated at 20/28/23 (city/highway/combined), we managed to hit those numbers relatively close with an average rating of 22 mpg combined. After fueling with Premium Grade fuel, the Q3 will return a respectable fuel range of over 450 miles to tank.

The Q3 may also look small from the outside, however once inside, there is decent interior space for passengers. The standard 12-way power adjustable front seats provide that perfect SUV height seating position and rear passengers have just enough legroom to not complain. Our base Q3 has no shortage of standard features at making sure its passengers are always comfortable: Black Leather Interior, Dual Zone Climate Control, Heated Front Seats, and one of our favorable features, a Panoramic Sunroof. Of course though, you cannot have an Audi without fitting its fantastic MMI Navigation ($1,900) – which is all easily controllable through the center stack command center. 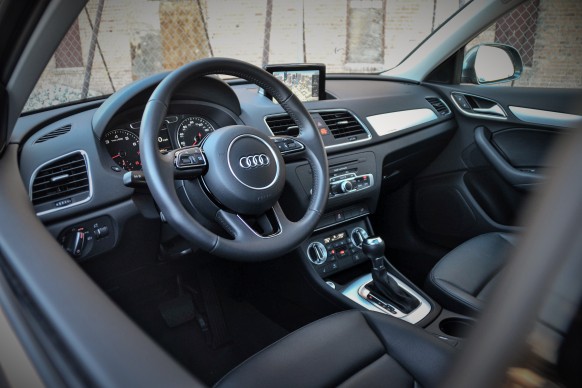 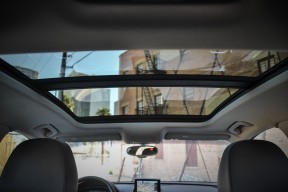 Whenever you’re looking into a small SUV, there are going to be a few shot-cummings – the rear cargo hole is a tad shallow and the trunk lid does open a little too high, which makes it hard to close – thanks to our Power Tailgate ($400), we didn’t have to worry about it. Now, we don’t like to complain much and while these are just minor defects that, really any car could have, we were disappointed with the fact that the Q3 was not fitted with a back-up camera – and with our tester hitting close to the 40-grand mark, that’s just unacceptable.

However, if all we managed to complain about was a tailgate issue and no back-up camera, what does that say about the Q3. We find it makes a fantastic addition to the Audi line-up and opens a new portal to perspective buyers. And with a starting price in the low 30’s, it makes for quite the good buy.