We can’t always drive the Lexus RC-F’s of the world. Occasionally we have to come back down to earth and face reality. The redesigned 2015 Toyota Yaris is our reality check.

You see, we love cheap small cars; not only because they bring us down to the world of common consumers, but because they’re designed to suffer through the brutal workforce of day-to-day abuse, constantly being pushed to a limit. Whether you’re a teenager trying to stuff 9 passengers in the trunk or a struggling on-the-road salesman, a cheap small car is designed to sustain whatever life holds.

Toyota went all out to making their new Yaris appeal to all sorts of consumers. The new design has a very European flow and a small presence of Hot Hatchness. This 2015 update incorporates some new flare of a redesigned front fascial expression, new headlamps, wheels, as well as an updated rear end. Our sampled Blue Streak Metallic Yaris arrived as the life of the party wearing an SE badge which offers sassy 16” black and silver alloy wheels, projector beam headlamps with groovy LED daytime running lamps and a large honeycomb mesh black grille. 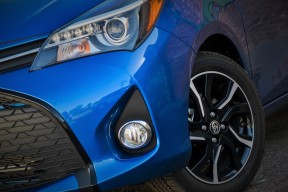 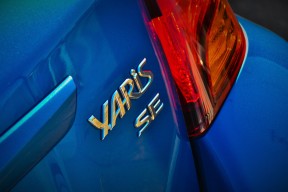 As part of the 2015 update, Toyota wanted to give the Yaris more than just a pretty makeover. They wanted to enhance the driving experience to match the sport SE badging by fine tuning the chassis and suspension – this makes the Yaris more robust with a dynamic feel. By adjusting the electric power steering, the Yaris has a more aggressive, sharper sensation – even at low speeds you can enjoy what the Yaris has to offer as you toss around corners or round-a-bouts. And while it may sound unimportant, by adding half an inch of tire width on the SE model, the Yaris provides better road feel and handling maneuverability – which is what you’d want from a city car.

However, let us not trick you into thinking the Yaris is somewhere in the makings of a Hot Hatch. While these updates significantly improve the Yaris, we are let down by two things. First, its 1.5-liter power plant, second, it’s linked to a four-speed automatic – the same setup used in the lost, but not missed Toyota Echo from the turn of the millennium. We’ll warn you teenagers now, don’t try impressing your friends when it comes to speed. Utilizing all of its 106 horsepower, the Yaris takes over 11 seconds to 60 mph. Making matters worse, at higher revs the engine sounds like pre-teen girls at Justin Beiber concert – #annoying.

Being that the Yaris is slow and connected to a slushbox, everything else is quite good. The Yaris provides everything you expect from a small city car in terms of driving comfort – the suspension is smooth, the cabin is quiet and the fuel consumption is minimum. EPA rates the Yaris at 30/36/32 (city/highway/combined), and we managed to match those figures averaging 30 mpg combined on regular unleaded fuel. With a meager 11 gallon fuel tank, you can go approximately 250 miles before stopping at the pumps for another cheap top off of gas.

While the Yaris received dramatic improvements to the exterior and the bone structure underneath, the interior is somewhat of the classic layout. Some enhancements were made throughout adding soft touch materials, new piano black trim and a new 6.1” Entune touch screen system that makes it more fitting with the times.

Like we mentioned before, the Yaris provides everything you expect from a small car – the seats are adequately comfortable, there is room in the back for people, and the rear seats fold flat for additional cargo needs. Feeling the need to complain, we do wish there was a center console to rest our arm during the rush hour boredom. 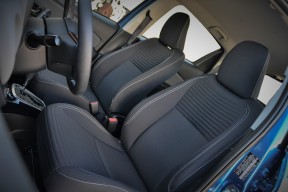 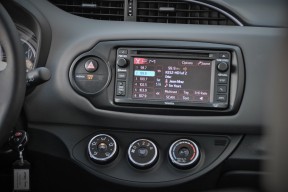 In terms of performance the Toyota Yaris is falling way behind its competitors; the Ford Fiesta, Chevrolet Sonic, and Honda Fit are more suitable companions with six-speed auto-boxes and more refined engines; however, all of those start to easily crawl into the low to mid 20’s while our Yaris, even seen here is settled at an as tested price of $18,625. This redesigned Yaris works for the time being – we’d wish for a better tranny and a few more horses but it’s enough to hold down small car fort until we see the next generation Yaris – which is rumored to have partnered with Mazda.