Even though we’ll act like teenagers when something like a special edition off-road pickup arrives at our office; we actually secretly get more excited for something that sits entirely at the other end of the automotive spectrum: minivans.

Really it’s ironic since minivans are the least most exciting thing to drive on the planet. However, it’s not always about the way it caresses our inner driver, but about the massive amounts of hidden treasures that are found within. Case-in-point, the 2015 Toyota Sienna – which has been updated for 2015 with some new exterior styling cues, some new fashionable interior looks and hardware updates.

First, we must cover the boring stuff. The Sienna carries over the same 3.5-liter V6, the beating heart and soul found in most of Toyota’s larger vehicles. Taking nearly 8 seconds to 60 mph, the Sienna certainly knows how to use all 266 horsepower to hustle around town through its six-speed automatic transmission. And since our tester was the standard front-wheel drive, it somehow expressed a wee bit of torque steer when we got a little aggressive on the throttle – which was interesting. On a side note, the Sienna is still the only minivan on the market to offer an available All-Wheel Drive system on every trim but the base L.

Of course being that it’s a family hauler, the Sienna isn’t really going to tickle your funny bone when the roads get a bit twisty. In fact, it’s best to stay on the boring interstate, you’ll get their quicker anyways. The suspension is uber squishy and soft as bumps will go unnoticed and if you take a corner too fast you’ll slide right out of your seat – which could be entertaining. The steering is numb, feeling unenergetic – like you’re steering a yacht, you don’t feel anything when you turn the wheel but you see you’re going in a different direction. We suppose if you’re looking for something a bit more thrilling the sportier SE would be right up your alley – that one even has a body kit – snazzy.

Our sampled Limited is the highest trim you can go amongst the Sienna family with trims ranging from the base L, LE, SE, XLE, to the fully loaded Limited. Looking very Plain Jane, the Sienna was given some minor tweaks here and there to give it a fresher look for the new era. Adding things like HID headlamps with integrated LED daytime running lamps, a new fashionable four-bar grille and some new taillights (the LED taillights are unchanged on the sportier SE trim.) And to finish off its simple minded stance the 18-inch alloy wheels fills in the gaps nicely.

Now onward to what we find exciting – the hidden treasures that linger within. They’re not really hidden, as they are in plain sight. With our tester nested at the Limited stage it is loaded up with things like the dual power sliding sunroof’s, the massive dual-view Blu-Ray entertainment system, the comfy 2nd row lounge chairs with ottomans, power folding third-row seats… the list will just keep going. But it’s just not the features, the storage capacity is immense. Like the dual glove-box, the sliding center console, storage pockets everywhere, and its cup holder galore. On top of that, the rear power lift-gate always makes life a bit easier when you got your hands full – which could happen from time to time.

As part as the 2015 update, the biggest change to the Sienna was a new interior dash design adding a modern look with contemporary high quality finishes. The overall look is very ecstatically pleasing using a good deal of soft touch materials. The layout is clean with every button and knob having its place which is well within the drivers and passengers reach. The new 7-inch high-resolution touch screen infotainment system features the latest Entune software from Toyota which is very intuitive, easy to use and to navigate. Using a new touch surface interface, this system is decently receptive and quick to the responses. And don’t think Toyota skimped on the comfort features, this Limited offers up Blind Spot Monitoring, a Heated Steering Wheel, Tri-Zone Climate Control, and an awesome JBL Sound System with a Sub-Woofer (a sub-woofer? In a minivan?).

Our tester’s ash gray leather interior was about as dreary as our exteriors Silver Sky metallic paint – but it provided a cozy place to be featuring soft, comfortable, power adjustable heated front seats. There is plenty of space for all types of passenger no matter which row is filled. The 2nd row seats can slide about, recline and can even be removed (though are quite heavy – but do not fold.) With our available power folding 3rd row, it was a snitch to push a button and watch the 3rd row disappear. 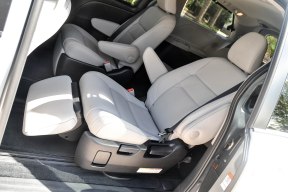 Also for 2015, the Sienna features some of the latest technology on the market. As part of the $1800 Limited Advanced Technology Package we’re offered Dynamic Radar guided Cruise Control, a Pre-Collision System, Vehicle Dynamics Integrated Management System (whatever that is – sounds fascinating), and Hill Start Assist. The radar guided cruise control here is really the icing on the cake as it adjusts it speed without ever really being noticed – the transition from either slowing down or speeding up maintains a constant smooth adjustment.

Now fuel economy isn’t going to be that great – but what do you expect, it weighs nearly 4800 pounds and is powered by a V6. EPA rates the Sienna (front-wheel drive) at 18/25/21 (city/highway/combined.) Using regular fuel, we saw an average of 20 mpg’s and nearly 400 miles of travel distance – we assume having kids, you’ll be stopping long before the 400 miles.

After adding $185 for a roof rack, $55 for a pair of wireless headphones and $885 for destination, our tester’s $47,945 price tag is a bit hard to swallow. But really, with this must technology, comfort and amenities all wrapped together, you really can’t go wrong with the new Sienna.