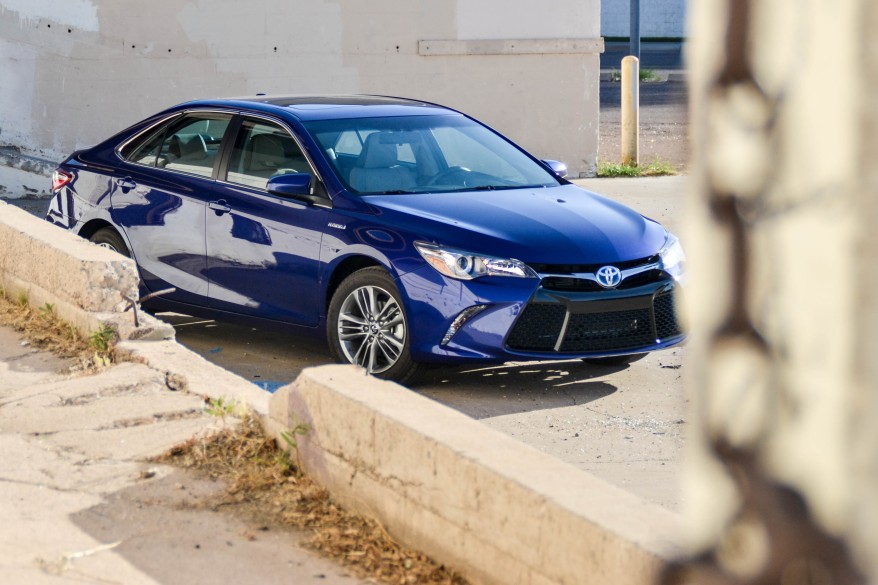 Sacrificing driving dynamics for higher MPG’s usually would be the case when in the market for a family friendly Hybrid. However, considering that Toyota’s top selling SE trim on their Camry has become more popular than Lindsey Lohan’s Twitter feed, they decided to introduce the SE into their Hybrid Family Tree.

As we saw earlier this year, the Toyota Camry over saw some extensive transformations for its mid-cycle refresh and this new extension to the Hybrid community doesn’t fall short of surprises it has in store for us. Now, the new look has ruffled some feathers and we’re not quite sure why. Toyota gave the Camry personality by adding a more aggressive posture with a chiseled front fascia, assertive looking fangs, and a blacked out honeycomb grille (only available on SE models.) Even seen here in a Blue Crush Metallic paint, rolling on 17-inch smoked alloys, this Hybrid is a head turner.

Inside, Toyota did some tweaks here and there that may not be that obvious. But by adding a new steering wheel, new instrument cluster, and some soft touch materials throughout, it gives the Camry a much more premium feel. The biggest change however, was to the infotainment center stack, which here in our tester is a $1300 option (part of the Entune Premium Audio and Navigation.) It’s a system worth investing – it’s simple to use, intuitive and responsive to the inputs with a superb backup camera.

Our testers Ash Gray interior was a groovy one that, making for an appealing transition from our blue exterior. The seats were lined in a vinyl, leather-like material with a funky designed hard cloth-like insert. It was a bizarre combination but it worked and the seats were comfortable and well supportive – rear passengers had no complaints with a spacious area providing decent thigh, leg, and head room. 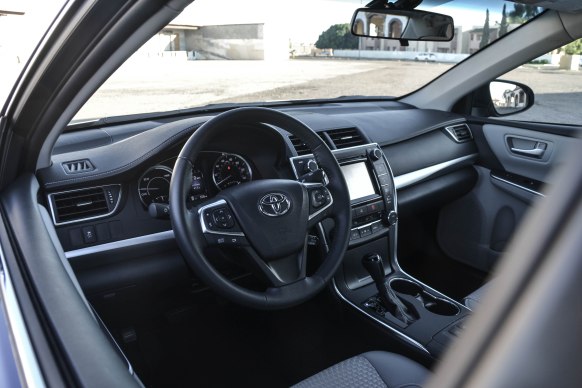 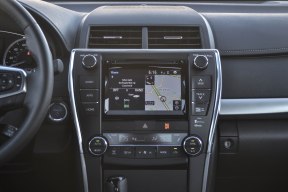 Carried over from the previous year, the Camry Hybrid makes due with a less sporty 2.5-liter four cylinder engine mated to an AC electric motor. Surprisingly, the Camry Hybrid is a hint quicker when trying to scamp onto the highway than the regular 2.5-liter non-hybrid. Whereas the non-hybrid 2.5-liter barely makes due with 178 horsepower, this hybrid works with a combined 200 horsepower which then dashes to 60 mph in a little over 7 seconds – how bout them apples.

Amongst the entire Camry family, Toyota gave their family sedan’s chassis some much needed T.L.C. Things like increasing the structural integrity, making it stiffer with additional spot welds and tweaking the electric power steering to boost more driver feel. The SE Hybrid here received a little bit more as they added a rear anti-roll bar for better handling and some special suspension work that takes a Mechanical Engineer to understand.

In the attempt to make their most popular trim fit the badge on the trunk, we think they might have over done it on certain things. Trying to make the steering feel more lively, they actually made it more heavy, which at low speeds is a pain. And even though the suspension is technically designed for comfort – which they accomplished – it’s far from having a sporty pedigree.

But the truth is, none of that matters… because the hybrid system here is phenomenal! With 200 combined horsepower at your fingertips power is always constant. Using an electronically controlled CVT transmission, the power band is always on – when you put your foot down it… it really does go. And being that of a hybrid system it uses kinetic energy from when you take your foot of the gas and when you apply the brakes to constantly recharge the batteries which means you might be able to potentially achieve its EPA rated 40 mpg. 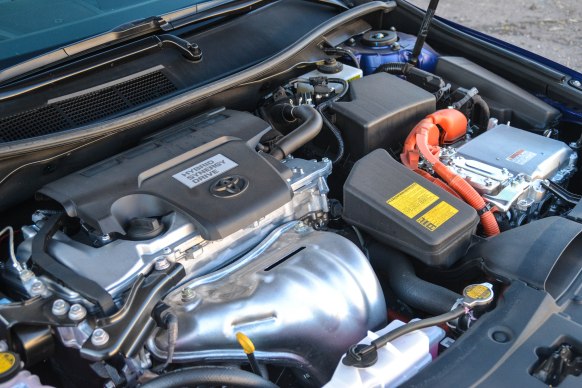 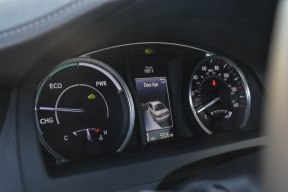 Even through our real world testing, we surpassed the targeted 40 mpg mark and managed 42 mpg in the city… but after some mixed highway, our combined rating sat at 35 mpg’s. Even on regular fuel, the Camry Hybrid can take you about 430 miles before it needs another prescription of fossil fuel.

Our sampled Camry Hybrid came with a cluster of options that we find rather pointless and say save your money on. Things like the $75 Qi Wireless Charging – it’s a great idea but only works with a special phone case and won’t fit any of the larger phones like a Samsung Galaxy S5 or an iPhone 6 Plus. The $499 Remote Start – it’s utterly useless – it only works when you’re 10-feet away and turns off the moment you unlock the car. The $299 illuminated skid plates are cool, but not for 300-bucks; however, we would be happy to spring for the $915 Sunroof (which we were equipped with). After adding $225 for carpeted floor mats and a destination charge of $825 our tester comes in at $32,133.

Like the standard SE trim, this Hybrid SE should sell like hot cakes, and it should – it looks great and has a fantastic hybrid system. While the bar was quite not met with sporty credentials, it’s close enough to earn a thumbs up in our book.