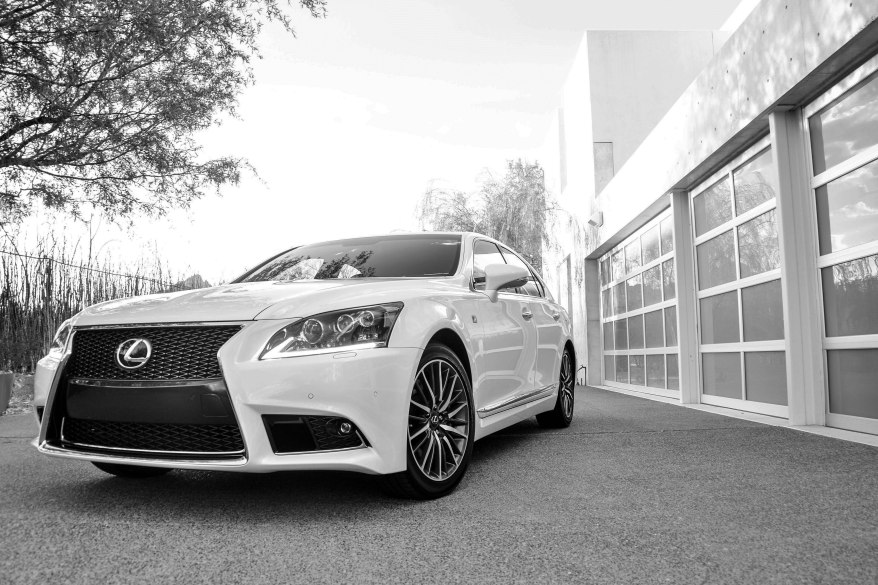 In a world of large ultimate luxury performance based sedan, anything under six figures is going to be considered a bargain. The LS460 is Lexus’ largest ultra-luxury sedan, and like everything else in their lineup, they slapped an F badge on the side, gave it a little blue pill and all of sudden it’s a bit frisky – all for less than 90-grand.

But what good is 500+ horsepower if you’re never able to channel it? You can’t use it all the time… right? At least, that’s what we’ll convince ourselves for the sake of this review anyways.

Sometime in the early part of 2014, we took a look at the more road pleasing LS460 – it was a quaint kind of machine with sleek lines and looks that could swoon Matthew McConaughey (when he’s not doing some cheesy Lincoln Commercial.) With the addition of those fancy F SPORT badging adds an extra $8,350 over its starting $72,520 price tag. In a lustrous Ultra White coating, it’s not like you won’t get noticed – the 19-inch black wheels are sharp – the LED Headlamps ($1450) are glorious – and those LED taillights… just icing on the cake. 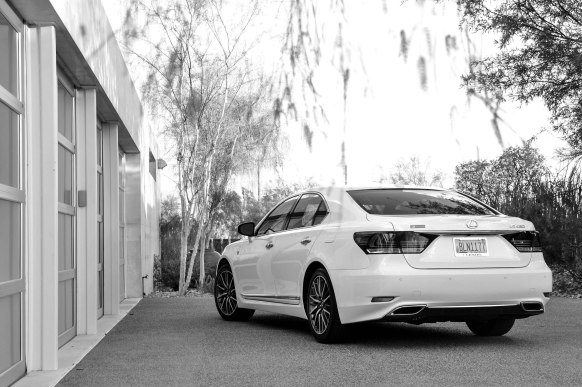 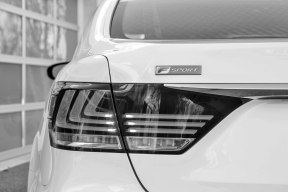 Nearly breaking our scales at over 4200lbs, the LS460 is a big car. It needs a big engine. The 4.6-liter V8 is the same engine found in a standard LS460 which means it still goes as fast to 60 mph in 5.4 seconds and to a soothing top speed of 130 mph. Even in this F SPORT version, the acceleration is not brash or violent – it ushers – it doesn’t set our pants on fire – it just does as its ask and gets where it needs to go… quickly. Using an eight-speed automatic, gear changes are suave and responsive – no fuse, no muse.

Having the F SPORT though…. that’s supposed to change things… change the dynamics of how a car drives and ultimately feel… key word “supposed.” As we experienced in the IS350 F SPORT and the GS350 F SPORT – it does – it becomes a different animal. In the LS460, turn the knob to SPORT PLUS, the gauges get devilish horns, the suspension gets a tad firmer and the gear changes get slightly beefed up – nothing too dramatic. Granted the suspension is designed for a leisure ride and it provides as such, but the minute you’re aggressive with the steering wheel, you’re rear seat passengers are sliding into each other’s laps. Even in SPORT PLUS, handling is quite elusive, feeling disconnected – not something we’d expect from the F SPORT model.

However, take the F SPORT out of the equation for a moment – the LS460 is a supremely nice car to drive. The ride quality is superbly comfortable – hours and hours of road travel will whisk by without any backache. And when you stomp on the accelerator the LS460, makes a subtle grunt and just goes without any hesitations – that’s when the eight-speed transmission is excellent, it quickly shifts into the required gear without skipping a beat.

Opening the door to the LS460 is an experience all in its own. Walk up, grab the handle and the mirrors unfold, open the door and the smell of genuine leather over takes our senses with a lingering reminder of a country boutique store. With the F SPORT package, brought about many, many comfortable features like our sporty contoured multi-way power adjustable front seats, silver and black trimming throughout, a thick perforated leather wrapped steering wheel and a nicely finished black headliner.

Having featured the F SPORT Comfort Package ($1650) brought out interesting terminology of Climate-comfort front seats, a Power Rear Sunshade and Power Lift/Close Trunk. Ultimately the interior of LS460 was a relaxing, calm place to be. The seats were big and soft and rear seats were supremely cozy with loads of room to move about.

Standard was the 12.3-inch infotainment display with Navigation. In previous Lexus’ experiences, we quite like the mouse pad interface; however, here on a screen this size, it doesn’t work as easily – it takes a lot of movement from the mouse to work between menus and settings, and with this large screen we are starting to notice a loss of quality, now that most brands are starting to offer high-definition displays. 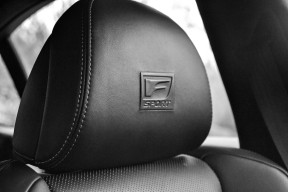 Our tester here was pushing $87,000. At that cost there really shouldn’t be anything to necessarily dislike – but there were. With our sampled LS460, the brakes were way too sensitive and touchy causing odd, abrupt stopping maneuvers and with 2200 miles on the odometer they were squealing embarrassingly loud. The interior silver and black trimming is a nice touch, but has a cheap plastic feel, not something we’d expect. And with the F SPORT Package was to bring about power adjustable side bolsters, but there was no button or setting to adjust that – and the internet wasn’t helpful.

Remember, this is a stomping big 4.6-liter V8 hauling over 4200lbs of weight – it’s not exactly the Prius’ of luxury sedans. 16/24/19 (city/highway/combined) is the EPA rating on fuel mileage. During our course of 7 days, we managed 19.5 mpg combined and even with fueling on Premium Octane, we managed to only get 360 miles to a single tank.

If you’re not looking to spend six-figures for a performance saloon, but want something that looks just as aggressive and will cocoon you in lavish luxury, the Lexus LS460 F SPORT is a smart choice. However, if you want to drive like you got ants in your pants – grab a crowbar and break open that wallet!