Here in the Arizona desert when it averages a blistering 115 degrees in the summer, a convertible just doesn’t seem ideal. However when we managed to get our hands on the latest 2015 Volkswagen Beetle Convertible, we put on our sunscreen and powered through – besides, we needed to work on our tan anyways.

Since the 50’s, a Cabriolet version of the Beetle has always been there to follow in its footsteps for those who like the nostalgia factor of cruising the streets in a convertible. Last year, we looked at the revamped Volkswagen Beetle TDI that offered masculine touches of bulging good looks and 40 mpg’s – it was something us guys in the office wouldn’t mind being seen driving around town in.

Not much has changed for 2015, aesthetically speaking that is. Mainly what’s new is the power plant under the hood. Like the refreshed Jetta TDI we drove, the Beetle comes with a more refined, in tune 2.0-liter diesel or like our tester here, a new 1.8-liter turbocharged four-cylinder which replaces the old 2.5-liter five-cylinder.

Opting for the 1.8-liter engine puts us into a six-speed automatic with 170-horsepower. You can get a Beetle Convertible with a six-speed manual – but that will put you in the more premium fuel sipping TDI or the enthusiast preferred R-LINE 2.0-liter turbo with 210-horsepower. The base 1.8T is sufficient for this little 3200lb car as it can do a quick dash to 60 mph in roughly 7 seconds. The six-speed auto works well at providing snappy gear changes and offers an enthusiastic driving experience. 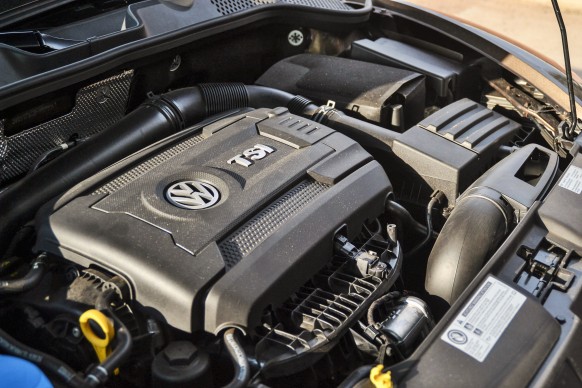 On the road the 1.8T has quite the pep – it hustles through traffic and when on the open highway it’s smooth and refined. You can feel the chassis is well built and holds a sense of willingness – it has a superior, forgiving ride quality that makes daily driving comfortable. There is some heaviness to the steering, but it feels direct – shame it’s let down by the slippery tires – the slightest heavy foot will spin the wheels and when tossed into a corner, it provides very little feel for the road.

At the face, this looks like your ordinary Beetle, it’s got the charm and the charisma that will put a smile on your face. Our base model tester here doesn’t really speak masculinity with its Toffee Brown exterior nor its beige soft-top roof – but in less than 10 seconds the roof goes down and opens up to a world of endless sky. Now, if you want that retro classic fashionable convertible look, prepare to waste the next 20 minutes of your life putting on that convertible roof cover.

Inside, out the Beetle has a very retro feel. We like the use of color matching panels on the dash and enjoyed our beige interior – which we find always brightens up the mood. Since our tester was near the bottom end of the features list as a mid-base trim referred to as 1.8T w/ Tech, it sets us up with a touch screen infotainment system, back-up camera, Push Button Start and Vinyl Seats with Heated function. It’s fairly generic, but works. Surprisingly, once you put the roof up, there’s tons of head room and the interior space is rather comfortable but the seats are manual adjustable only and the back seat is tight – designated small people only.

Now it all comes down to price, and it isn’t cheap, $28,815. We get it, the nostalgia factor – it’s a cool, hip, retro car – but at 29-grand this base Beetle was denied alloy wheels, had no navigation, a terrible back-up camera, the vinyl seats felt awkward, there is no storage (i.e. sunglasses, lose change, etc…), the backseat is basically useless, and the trunk could barely fit one shopping bag (maybe two if you remove the convertible cover.) Plus, VW still hasn’t incorporated a USB port for electronics (later to be introduced in 2016 models), the sun visor is ridiculously useless and it constantly sounds like a window is open. 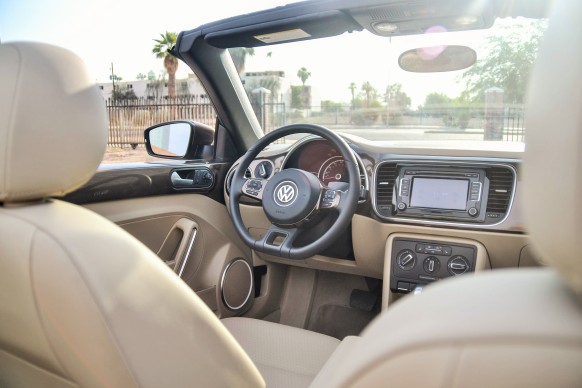 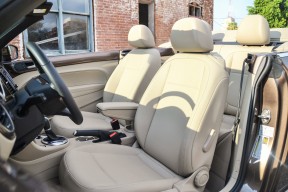 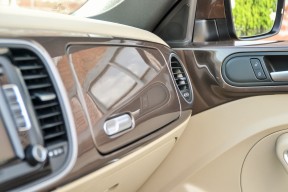 That said, the Beetle is an excellent piece of mechanical engineering and it’s excellent to drive. Even with it averaging 32 mpg’s on the highway and an overall 25 mpg combined with 350 miles of fuel on tap, it’s not half bad economically. But if we were to spend 29-grand on the Beetle, we’d either have the 2.0-liter TDI or the 2.0-liter R-LINE with a roof – both have six-speed manuals and are much more appealing to the manlier of men.