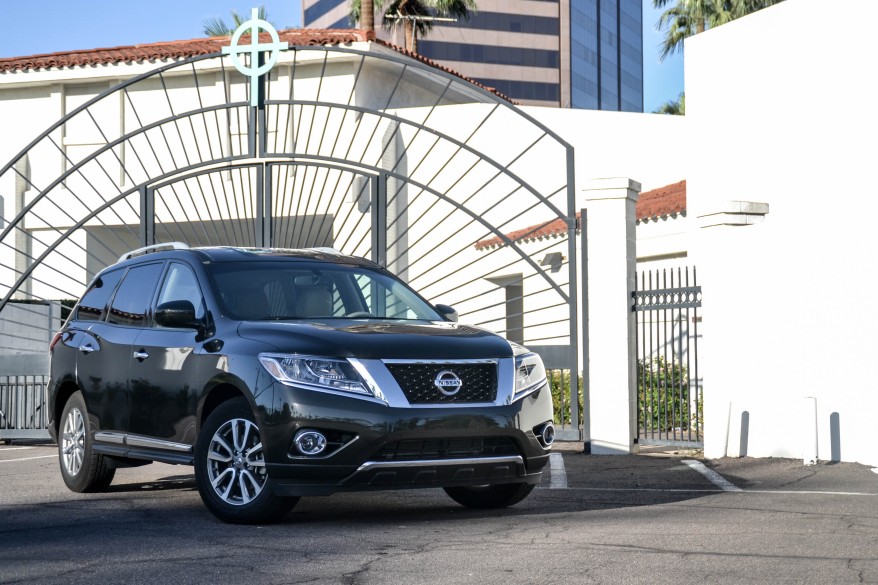 In our line of work, it’s always a pleasure to get to test the fully loaded models with every option box check, but in the case of the real world, not everyone opt’s for the top-of-line version and instead goes with a more mainstream trim level. In this case, our sampled Pathfinder was the SL which fits right in the mix of what consumers are looking at.

The SL sets us up right smack in the middle of the Pathfinder trim levels starting with S, SV, SL, SL Tech, SL Premium, and then the top tier Platinum (which we looked at in 2014.) To be more specific, our sampled SL starting at $36,060 was optioned up with the $2030 SL Tech Package and $210 Carpeted Floor Mats bumping our final out of pocket cost to $39,185 after the $885 destination charge.

Even though this is the mid-level SL, it’s loaded up with all the finest of features you expect in this modern world of accessories and amenities like a supremely comfortable leather interior, heated front and rear seats, multi-way power adjustable front seats with driver memory seat, tri-zone climate control, remote start, Blind Spot Monitoring and a power lift tailgate. The addition of that SL Tech Package brought in a premium 13-speaker BOSE audio, an 8-inch infotainment system with Navigation and Around View Monitor, and a rear Trailer Tow Hitch that supports up to 5,000lbs of towing.

As we start creeping into the later part of the decade, more and more cars these days are starting to geek out with LED lights everywhere and radical design schemes. The Pathfinder in this scenario starts to look a tad aged even though it’s just only a couple of years into its current generation. When we look at Nissan latest line-up with the edgy styled Murano and Maxima, the Pathfinder becomes forgettable – that’s the problem when trying to make everything look futuristic. At a mere near 40k this SL Pathfinder is still running with regular ole halogen headlamps, no daytime running lights, and didn’t even offer a sunroof. On the plus side, this Pathfinder has a well fitted amount of chrome and roof rails that add a proper SUV look. 18-inch wheels are standard across the board, and do fill in the wells nicely giving an attractive stance – the Platinum trim will upgrade you to brash 20-inchers. 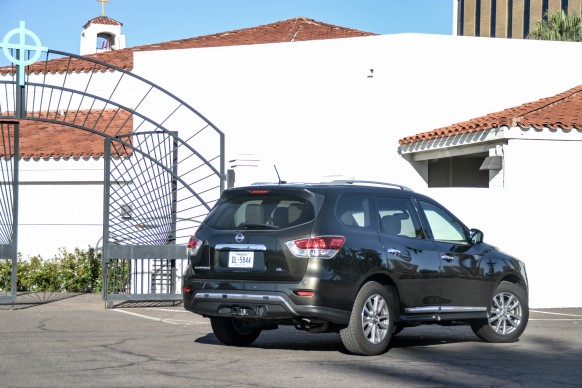 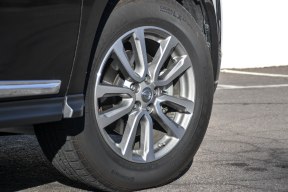 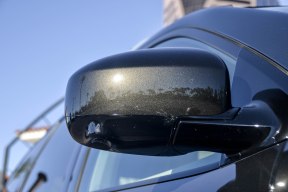 Inside, some of that outdated-ness starts to show through even more. Most cars now offer up tons of attractive soft touch materials on the dash and door panels with unique design schemes – that’s where the Pathfinder starts to fall short. You’ll find loads of hard plastics and what feels to be cheap material. Now that’s not to say the interior of the Pathfinder isn’t nice, because it is a very nice place to be. And especially with our Almond interior, it’s much more appealing than the usual black that we always see; although black does hide the dirt and smudges. The Pathfinder also uses a fair amount of interior trim with a good use of wood and silver accents – even though they do look a bit cheeky.

Using a healthy dose of power from its 3.5-liter V6 – 260 horsepower will carry this 4500lb crossover to 60 mph in about 7 and half seconds. Once we found the right power band in the RPM’s, the power delivery is linear and direct from its CVT transmission. However, under normal driving conditions the CVT comes off disconnected, it drones during acceleration, and when accelerating from low speeds it drops all of its RPM’s. When we needed a little more power, it has to rebuild all of its RPM’s again which effect fuel economy as we saw 19 mpg combined over a course of several hundred miles. The suspension is everything we expected from a family crossover, smooth and comfortable but not enthusiastic when it came to driving dynamics. It handled like a boat caught in a hurricane with loads of body roll and a steering wheel that provides more road feel when parked. 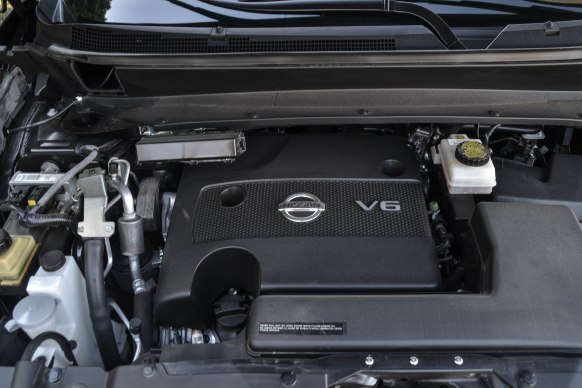 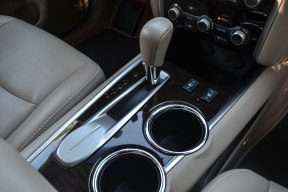 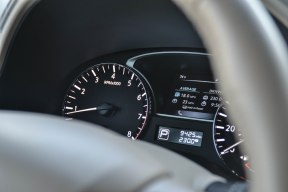 Now granted, the soccer mom of today doesn’t care about how their crossover feels when it comes to drivability – as long as it has plenty of power to merge into traffic, it’s comfortable on road trips and that it’s safe for the family. The Pathfinder is all those things – it’s quick on its feet and maintains a very comfortable atmosphere and has all the latest tech to keep you and your family safe. Even though our sampled SL didn’t have the NASA inspired Zero Gravity seats, the seats here were plenty comfortable for any long journey. There is room in the back for any sized kiddo and with a simple access to the third row, their friends can tag along too. The second row seats can easy slide about and adjust to allow for more leg room to those third row occupants.

When it comes to technology, the Pathfinder again has us dumbfounded for what appears to be an interface from the mid-millennium era. The 8-inch infotainment system with navigation is not exactly the easiest interface to use and tis appearance is of that from an early 2000’s Garmin and the around-view monitor is grainy.Even the blind spot monitoring system looks as-if it’s an afterthought – it’s difficult to see in the sunlight and not exactly in the line of sight of the mirrors. 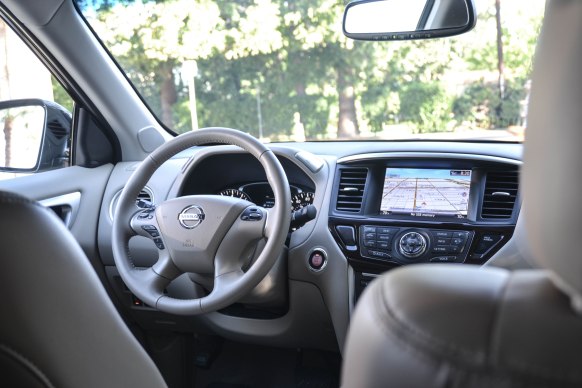 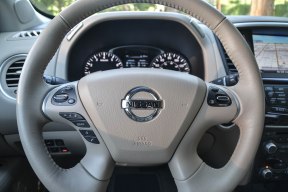 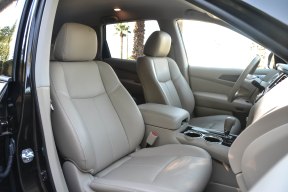 Storage is a big deal when needing to optimize the most out of your crossover – the Pathfinder has a fair amount of cubbies for food and toys to get lost in and never be found again. Even the glove box is mega sized. In the trunk, there’s a water proof storage container hidden below the floor to store treasured valuables or a nasty diaper, although a quarter of the space is taken up with the BOSE subwoofer. With the third row up, there is room for a simple grocery run – fold it and more space follows. Need to haul sporting equipment or large items, the second row seats fold completely flat for even more space.

Opting for the Pathfinder, you won’t be disappointed – after all it’s a very pleasant crossover that offers tons of comfortable features that usually tend to be only available options with other brands. But at the end of the day, the Pathfinder has already become outdated before its new generation has barely begun. We’ll just have to wait and see what the refresh brings us.