Pushing 10 years, Scion was first introduced to the market by offering a youthful product that allowed hooligans to tailor and distinguish their cars to irritate neighbors with preposterous paint jobs and obnoxious exhaust systems. Over the course of the decade, it almost seemed as if Scion washed-out of sight for these thug-life wannabe’s, or they merely grew up and all bought Camry’s. But to stimulate some new and electrifying vitality into this demographic, Scion has launched some new products, one of which, this iM.

Sadly though, the iM is not technically new – in other parts of the world it is a Toyota Corolla hatchback and in Europe it’s a Toyota Auris. But for the US market, it’s new to us or at least fresh – styling wise anyways. It shares the same underpinnings as the standard Corolla and uses the same 1.8-liter valvematic four-cylinder from the Corolla Eco. The 1.8L has been reconfigured however to produce 137-horsepower, 3 less than the Corolla Eco. Nonetheless, parents will take kindly to the 9 second time frame to 60 mph – slow enough to stay out of trouble, but quick enough to make it to first period. 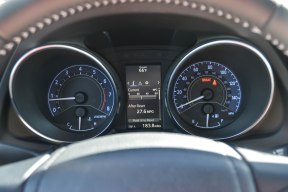 As our mothers always say, “never judge a book by its cover.” The stick on body flair, standard 17-inch wheels, retro LED lights and glitzy electric storm blue paint may all look the part of a spirited hatch, but when it comes to drivability, we fall short of what Scion thought was “sporty.” The iM is offered in a six-speed manual (as seen here), but for those who can’t quite shift for themselves, a simulated seven-speed CVT automatic is offered up.

Whether this is your first manual or your fifth, the iM’s transmission is a simple minded set up. The clutch is light and the gear throws are long, making it easy to drive and navigate the gear changes. The iM’s behavior is that of its sibling Corolla – feedback from behind the wheel is about as entertaining as playing Leap Frog on a GameBoy and the suspension is set up more for Driver’s Ed comfort than the high school parking lot rally. Nevertheless, it is a fun little hatch to toss around, even with its fair amount of body roll, but turn off the traction control and some fun can be had – not that we did that… uhm, anyway with standard four-wheel disc brakes, it at least stops fairly briskly.

Scion has always been known for the, you can have it any way you want, as long as it’s our way approach – meaning there are no factory options. No optional moonroof, or leather interior, or push button start – seen as they come (there are dealer installs however i.e. TRD Performance upgrades.) However, Scion has packed the iM with a ton of standard features that would be appealing to the new imminent generation of iZombies. Things like the 7-inch color touch screen infotainment system with text messaging alerts, dual-zone climate control, power folding side mirrors, and TFT instrument display – Navigation can be added, but that’s a dealer install item as well.

Our travels this week took us to the ever-most-popular strip of sin, Las Vegas – but we weren’t there to party… okay maybe just a little… we were primarily there to root our friends Tyson and Lance in the Rock N’ Roll Marathon. The journey was just under 700 miles round trip which gave me plenty of time to come accustom to the Corolla inspired vertical dashed architecture and abrasive cloth seats. Soft touch materials are found through out giving a satisfied impression in application. I did find the piano black trim is a bit much and found the infotainment system was not as user friendly as Toyota’s Entune software, it also didn’t offer Satellite Radio. 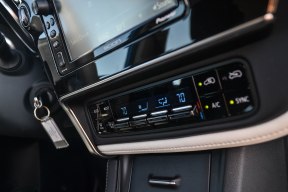 Over the course of our 700 mile trip, I found that the comfort levels were adequate for its size – cabin space was well executed for a compact and the front’s seats articulated decent lateral side bolstering and long distance ease. Back seat passengers will be rasping their knees on the front seats, so just make sure your friends are small. Sound quality was impressive with the use of sound density material the cabin maintain a quiet place.

As we drove up to Vegas, we stopped at this quaint diner before moving on, Mr. D’z Route 66 Diner, best burgers in town. Our hotel in Vegas was in Old Vegas, Downtown Grand, having been fully renovated, it was, needless to say up to my standards. The trip consisted of walking around doing touristy things like walking up Fremont Street, nothing too exciting – I was primarily there to hang out before my friends ran their race. And before they even hit the start line at 4:30pm, I was already working my way back to Phoenix the next day.

Finishing off my quick 18 hour trip to Las Vegas, I managed to average 31 mpg’s combined. Fueling up with regular fuel, the iM’s EPA rating is 27/36/31 (city/highway/combined) with an approximate 400 mile range.

After adding what Scion consider options: $165 Carpeted Floor Mats and Cargo Mat, $65 Wheel Locks and $89 Rear Bumper Protector; our sampled iM came in at $19,594 with a $795 destination.

Compared to the Volkswagen Golf, Ford Focus, and even the Kia Forte, the iM is not the quickest compact, nor the best to drive – but the iM has spunk, and personality, and to some people, that’s all it needs.