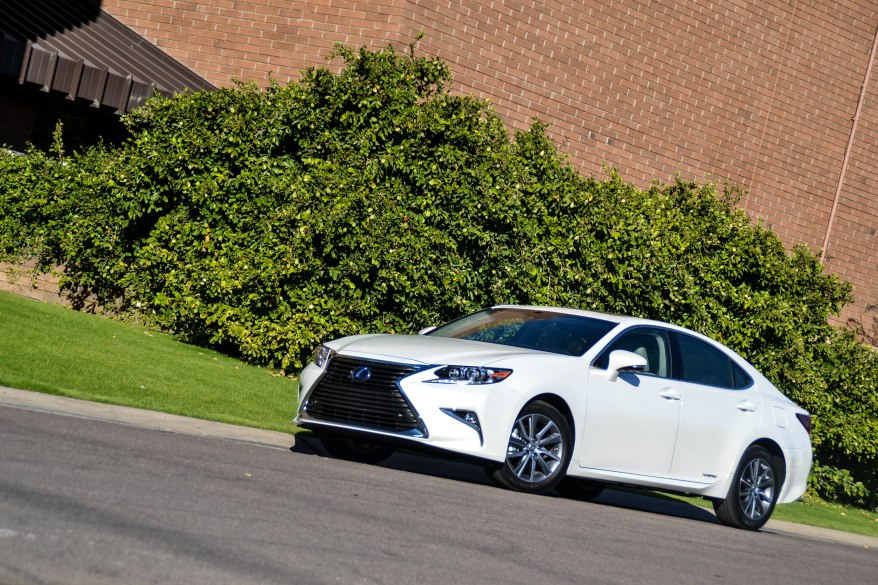 Lately, Lexus’ polarizing design scheme has everyone question whether they’re drinking too much coffee over in Japan or have they just gone crazy? But you know, everyone is entitled to their opinion… even if it’s wrong. While yes, Lexus designs are abstract, I like it – they’re different – they colored outside the lines and developed a product that will stands out from the ordinary. However, when it came to updating a car that appeals to the retired community of Palm Springs, they had to be careful. Question now lingers, will the new ES’s opposing looks and cosmic “spindle” grille affect future ES owners?

The Lexus ES is no stranger to the “spindle” grille design; after all, it was one of the first to represent the design change when they first redesigned it in 2013. For 2016, they grew the grille into the slab eating size we know of today. With the new grille also brought in Lexus’ latest design language on the front face with new standard LED headlights and switchback LED daytime running lights. Around the back, new LED tail lights have also been installed following Lexus’ newest ‘L’ design, found on the LS460. New 17-inch and 18-inch wheel styles have also been incorporated with the 2016 model – our sampled ES300h was rolling on low-resistance 17-inch machine finished wheels and provided a classy stance against our Eminent White paint. 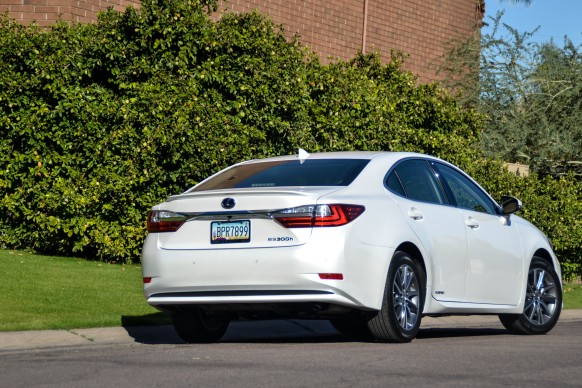 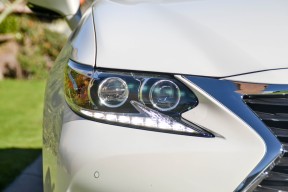 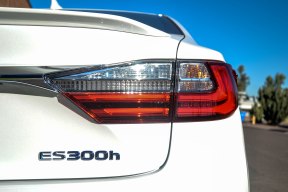 More updates followed into the interior with new wood trim and leather seating surfaces. One of which this Stratus Gray leather and Dark Mocha wood trim. Being of course typical Lexus, both driver and passenger had a 10-way power adjustable seats to find the perfect comfort setting. And thanks to the $3000 Ultra Luxury Package both seats were Heated and Ventilated with 3-way memory, while rear passengers enjoy blocking out the sun with a Power Rear Sunshade, and Manual Side Window Sunshades… other features included Ambient Lights, Power Driver Seat Cushion Extender and a Power Adjustable Steering Wheel.

There are more updates to the ES-Series than meets the eye as well – outside the new easy-to-use steering wheel (that’s fairly obvious). Lexus added a new instrument cluster with a high-resolution TFT display and a revamped Lexus Enform Interface – quicker responses and more intuitive with the help of a new puck-like system that now incorporates an “Enter” button. Kind of useless really, how hard is it to push down on the puck? 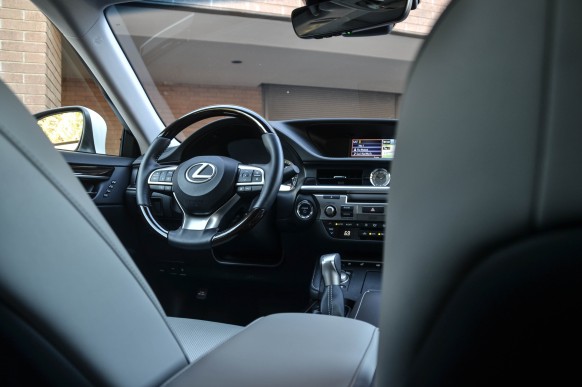 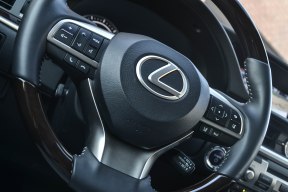 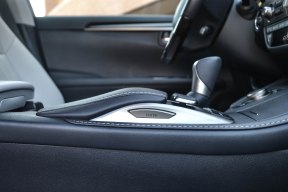 Unchanged is the engine under the hood. The ES350 continues to use a 3.5-liter V-6 while the ES300h Hybrid (as seen here) uses a 2.5-liter four-cylinder producing 156-horsepower. Matte that to a nickel-metal hydride battery pack and a permanent magnet AC synchronous electric motor, and we get a total of 200 combined horsepower. It takes one single gear to move the ES300h and that’s through what they call a CVT Transmission (Continuous Variable Transmission.) Taking nearly 8 seconds to 60 mph – it will leave you enough time to catch the first round of bingo.

The ES is not designed however for handling – so its maneuvers are, to say, meh. There isn’t much enthusiasm to be had, then again, it’s not designed to be that way – the wheels just go in the direction you point them from the nicely weighted leather/wood wrapped steering wheel. And as if I never left the couch, the ES300h is one of the smoothest rides to be had in the Lexus line up. Everywhere I went the ride quality was sensational, isolating me for a world of chaos and random pot holes. 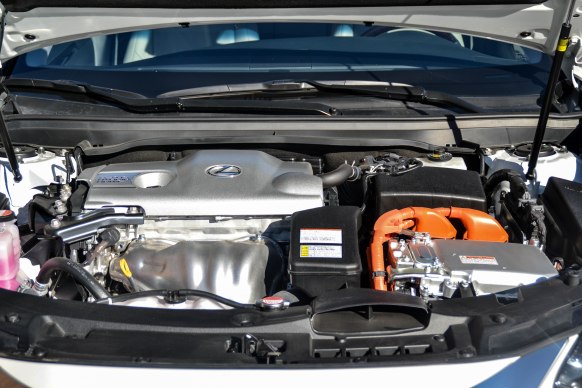 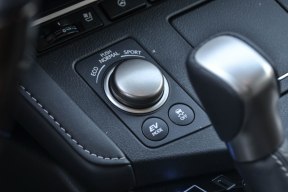 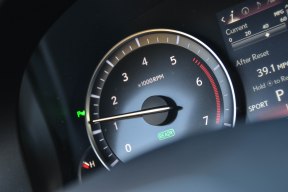 My travels this week didn’t take me too far out of town as I went up to Prescott, Arizona to my uncle’s cabin for Thanksgiving. The journey was only about 120 miles round trip. I stopped to pick up my mom, filled up the trunk with all the extra appetizers she was bringing and stopped off at Starbucks before heading north – I must have my Starbucks this early in the morning.

Traffic was light going both up and heading back, so the ES made the drive quiet and enjoyable. The $1015 Lexus Safety System with Radar Guided Cruise control managed its speed confidently while the Lane Departure Alert buzzed at my driving imperfections. With my tester being the Hybrid, the transition between electric and gas went unnoticed and anywhere I was less than 25 mph, I used EV mode to heal the trees as I drove by – at least for the first half mile. Comfort levels for our journey were a mere adequate, after 50 miles we noticed some fatigue and even though rear passenger had plentiful of leg room, the lack of thigh support was found as a discomfort.

Unfortunately with all the hills in Northern Arizona, my average fuel consumption didn’t quite strike the EPA rated 40 mpg’s as I only averaged 36 mpg combined with highway and city travels. Nevertheless that is still pretty impressive from a car that weights nearly 3800lbs. Though not required, fueling with Premium Grade fuel, I maximized its 550 mile range. 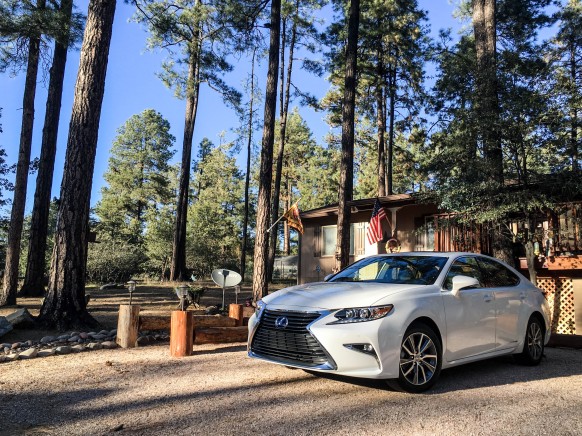 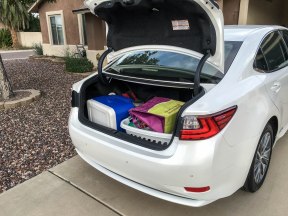 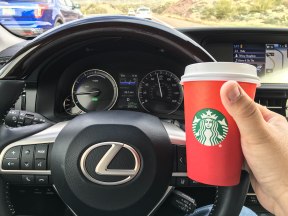 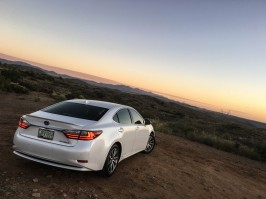 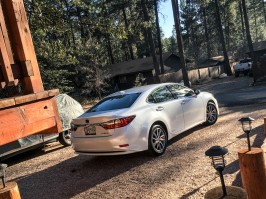 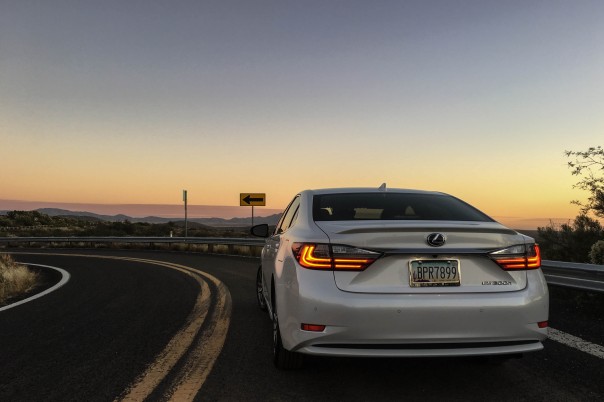 The ES300h starts at $40,920, start adding on a few options like our tester here and you’ll see a price tag around $50,530 – after the $940 Destination Fee of course. While the style may be a bit more eccentric, I find the ES is still an understated, classy, premium sedan – I like the fact Lexus didn’t go bonkers with the styling and kept it somewhat true to its demographic.  That said, I only hope the Lexus consumers agree.