Let’s be honest, when it came to the entry level IS250, it always kind of served as the poor man’s Lexus. Like the BMW 328i and the old Mercedes-Benz C250, the IS250 was for people who wanted the ‘L’ name, but couldn’t afford the 4-grand bump to the more performance capable IS350. After many, many objections over the base 204-horsepower, 2.5-liter V-6, Lexus analyzed the problem and came up with a solution that quite possibly has made the new entry IS a bit more witty.

Pulled from Lexus’ new entry level crossover, NX200t, the IS200t incorporates the charismatic 2.0-liter turbocharged direct-injected four-cylinder engine. Let’s keep the thrill coming as the IS maintains its rear-wheel drive sports sedan capabilities paired with an oh-so crisp eight-speed automatic. With nearly a 40-horsepower jump, the 2.0-liter turbo here spools up 241-horsepower and 258lb-ft of torque making a quick dash to 60 mph in 7-seconds. Just one second quicker than the old IS250.

Ever since the letter ‘F’ found its way into Lexus’ vocabulary, things have always been a little sweet. As a $3545 option, our sampled IS200t was fitted with the gorgeous 18-inch wheels wrapped in summer rubber, LED Headlights, and of course the infamous largemouth mesh grille. But the, oh so sweetness comes from the chassis underneath with an F SPORT tuned suspension making the IS a well-balanced, energetic, sports sedan. The suspension is firm, but it’s not uncomfortable – road feel is excellent through the tightly bound steering wheel and cornering is always flat. 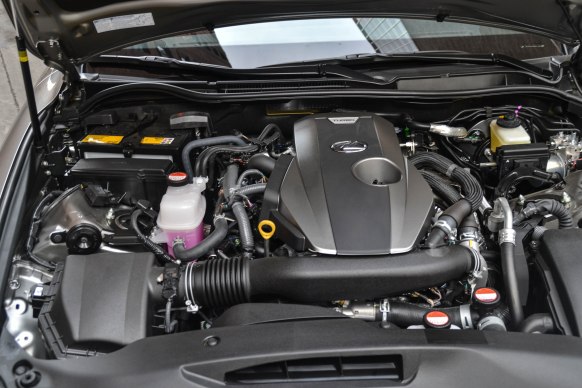 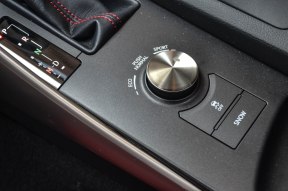 But let’s also not be fooled by its Atomic Silver charm and stunning red interior. This is still the entry level IS after all. And this turbo isn’t all that it’s cracked up to be. Turbo lag. It’s so apparent it gave us a headache. Usually in a turbocharged car, turbo lag is present, but can be hard to find to an average driver. To put the IS200t in perspective, it’s is like a really bad action movie, you go in thinking its going to be full of bad acting, but expect lots of action, but then the action doesn’t come till the very end. And then it’s over before you really got to enjoy it. That’s how the turbo is here, full throttle, and the turbo has to remember what’s it’s there for. However, like the bad actor playing in that movie, the IS200t can change its personality by a quick switch between Eco, Normal, and Sport. Sport doesn’t fix the turbo lag, but does sharpen up throttle responsiveness and holds the rpms in longer. During our duration, we found ourselves using Eco since we knew we were never going to get anywhere in hurry anyways.

Even for its entry level position, our sampled IS was what every Lexus is – very well appointed. The interior, not only dazzled us like red carpet celebs but was exceptionally supportive with its body hugging seats and multi-way power adjustments. While leg- and head room is scarce for rear passengers, they too will find the seating position to a liking. And what enjoyment can’t be found from behind that movable TFT digital display?

After a few years in production not much has changed – cosmetically. Paying attention to the details, some minor switch gear has been upgraded like the stainless steel radio knobs over the old rubber-like. For a small sedan, the interior feels a bit tight but overall makes good use of little space available. Every surface is outfitted with soft touch materials and well integrated trimming giving the cabin an overall premium feel. 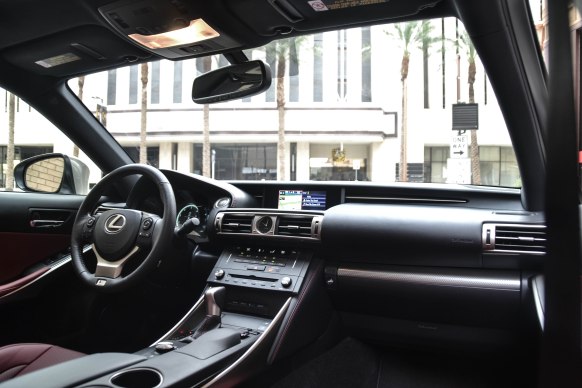 In the world of four-cylinder turbo’s in lieu of naturally aspirated V-6’s, fuel consumption is usually an improvement. However, during our week we managed to only average 21 miles to the gallon during our day to day run of the mill over the EPA rated 22/33/26 (city/highway/combined.) And having 360 miles of fuel to burn, it had no problem drinking up its required premium fuel.