With the truck market being saturated by new designs, technology, and enhanced engineering – we’re starting to wonder if the Toyota Tundra, once ahead of the curve when redesigned for 2014, is starting to fall behind this technology driven world. So we’re taking another look, two years later at the 2016 Tundra to see if it’s still a fighting contender.

Good news is the Tundra still looks the part in today’s ever rapid demand for change. Holding relatively a masculine approach, our top-of-the line 1794 Edition immersed in Sunset Bronze featured LED daytime running lights and massive chrome accents – cause that’s what us men like – our chrome. In lieu of the usual 20-inch chrome wheels, our tester here was outfitted with a rather confusingly cheap $100 TRD Off-Road Package that brought in smaller 18-inch alloys and trail-tuned Bilstein Shock Absorbers along with some other protection items underneath to insure we don’t cause any costly damage. 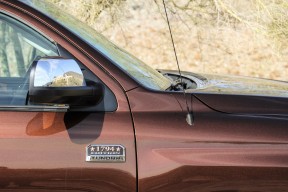 Turbo this, supercharge that, and lets cut unused cylinders while at it is the wave of the future. But there is nothing like a good ole fashion 5.7-liter i-Force naturally aspirated V-8 that will put hairs on your chest. And at nearly 6000lbs, 381-horsepower and 401lb-ft of torque will haul this fat ass to 60 mph in just over six-and-half seconds through a six speed auto. And if you really want to sprout off your manhood, it can tow up to 10,500lbs – that should make for a good size boat to piss off the misses.

The reality here, the Tundra is a TRUCK, so if you’re expecting quality handling – forget about it. It’s big, it’s cumbersome, and therefore handles like a city bus. The most entertainment found is from behind the noise pedal that gushes out the sound of a manly engine. Ride quality isn’t that great either, with that optioned TRD Off-Road Package the ride is… uhm… notoriously rough and bouncy. Which is great if, per say, we used it appropriately, but on everyday road conditions it’s just annoying.

So now, what is 1794? The short version… it’s a ranch in San Antonio, Texas. It was founded in the year 1794 that was later purchased by Toyota and is where the Tundra is currently being built. The 1794 is then to compete against the top tier Ford F-150 King Ranch, the Ram Laramie Longhorn, and the new Chevrolet Silverado High Country. And at $50,000, it fits right in with those cowhide lined interiors and faux luxurious lifestyles.

But really, once inside, the 50-thousand-dollar price tag starts to make sense being cocooned with the finer things in life. From the stitching on the dash, the wood trim, to the suede inserts, it all has a craftsmanship that one with a keen eye would enjoy. The embossed leather heated/ventilated seats are dreamy with both multi-way power adjustments and a driver side memory setting.  Our featured Tundra was the largest in the Tundra family having the CrewMax double cab that allows rear passengers to stretch out and enjoy being driven around, and by that we mean annoying passengers that complained the arm rest was too low down and didn’t have any storage for their iPhone’s. However, there is no shortage of techno gadgets; we got navigation with Toyota Entune and Text Message alerts, dual-zone climate control, Back-up camera, blind spot monitoring, rear cross-traffic alert and power folding side mirrors. 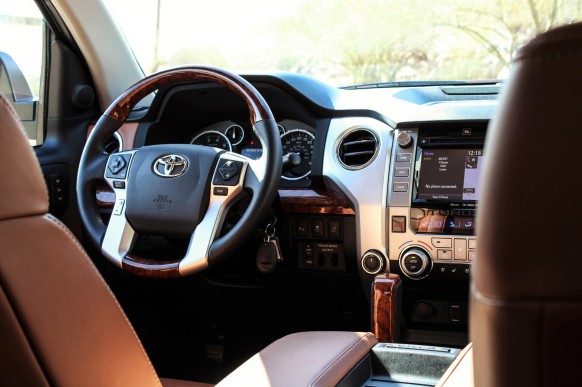 At the end of the day, the Tundra is fighting an uphill battle with its 5.7-liter V-8. Manufacturers are starting to incorporate cylinder-cutting technology to use only 4 of the 8-cylinders at cruising speeds and then you have Ford going EcoBoost on the all new F-150 with a lightweight aluminum body and chassis. It all shines toward fuel consumption and with our combined average barely hovering 13 mpg’s, the Tundra isn’t exactly being fair on our wallets. It’s tough to say that the Tundra is falling behind the pack though, sure it could use some updates like HID headlights, push-button start and a new generation instrument cluster, and maybe better fuel numbers, but it’s still a strong contender.