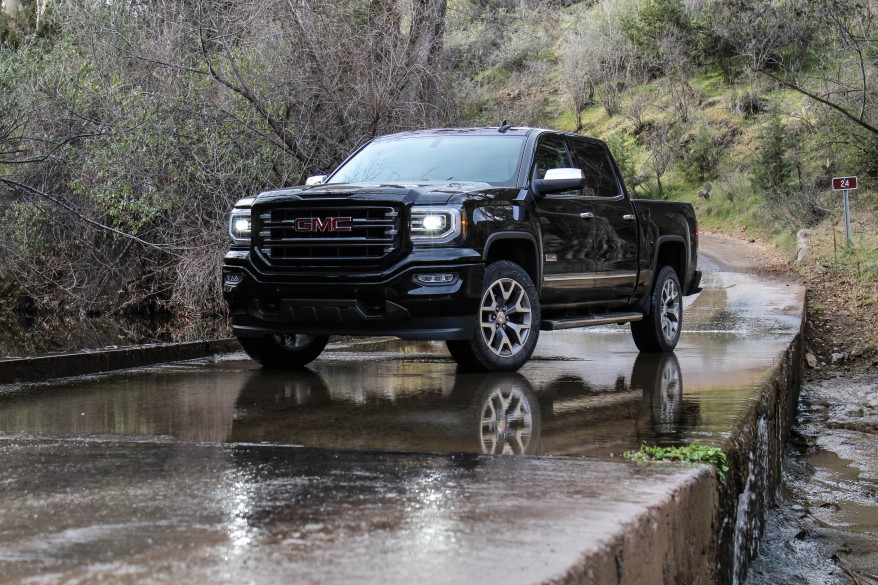 There was a time when trucks had this blue collar stigma – a reputation none-the-less for a certain kind of owner. Now, there is no such thing as a blue collar pick-up, they’re all too pretty to get dirty and with prices sky rocketing into the sixty-thousand dollar range, who can blame ya – I sure in the heck wouldn’t wanna get a scratch on it. Refreshed for 2016, I’m sure the new GMC Sierra will be fitting right at home in the Bass Pro Shop parking lot where their owners buy North Face apparel for their pre-paid camping excursion.

It seems almost as if General Motors was in a bit of hurry to launch a mid-cycle refresh of the Silverado and Sierra a couple years early after having been recently redesigned in 2014. Not that we’re complaining – just look at this gorgeous thing. Being mostly cosmetic changes for 2016, our sampled Sierra 1500 arrived as a top trimmed SLT in the ultimate masculine All-Terrain form starting at $46,970 – next stop is Denali Series if you want to spend some serious cash. 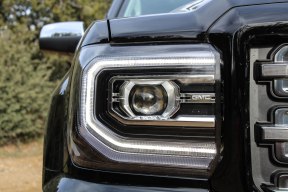 Besides the freshened face of many LED lights that could light up a New York Dance Party, GMC fitted a new bold painted grille and a more muscular, chiseled approach. The biggest change to come for 2016 however is not cosmetic; it is its new eight-speed transmission. Paired to our sampled 5.3-liter naturally-aspirated EcoTec3 V-8 engine, this all new eight-speed is an absolute peach. Pumping out 355-horsepower and 383-lb-ft of torque on our 3.42 rear axle – it glides to 60 mph in about seven and half seconds. While the optional 6.2-liter V-8 is about as manly as they comes when we experienced it in the Chevrolet Silverado High Country last year with 420-horsepower, but unless you’re planning on towing nearly 12,000lbs this 5.3-liter is such a nice companion for toting around town and to the shops while still capable of towing up to 8600lbs of toys.

Optioned up with the $1965 All-Terrain Package not only brings in cool chromed plates on all the four sides and durable floor mates but a Z71 Off-Road Suspension with MonoTube Rancho Shocks. Now around town, an off-road suspension can be cumbersome – unapologetic if you will with a really bouncy response to road imperfections. But surprisingly this suspension isn’t half bad. It has good road manners; it rides very nice and provides a comfortable setting. Now that’s not to say it doesn’t have its moments… like with speed humps where it tends to be over dramatic in how it copes with a bump at low speeds. But you see, we couldn’t just stop at the All-Terrain Package – no – we went and splurged for the $2450 All-Terrain SLT Premium Package too that brought in these big 20-inch wheels, chrome side steps, Font and Rear Parking Sensors, a Heated Steering Wheel and a sliding rear window. 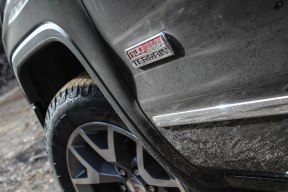 Handling is never a pick-ups strong suit and it’s the same thing here – the steering is fairly numb and the only connection between the wheels is definitely not the driver. However the leather wrapped steering wheel has decent dexterity in its motions and has a nice weight to it. It doesn’t feel heavy in the turns and is easy to maneuver. Turn radius isn’t that great but passing motorist easily forgive driver stupidity in something that can eat a Honda Civic for breakfast. If we were to nit-pick however, it would be against its brakes, while the brake pedal was firm stopping this thing was no walk in the park – perhaps with only 900 miles on the odometer they haven’t had time to break in.

While sometimes a big V-8 is nice – the grumble to the ears, the sheer power of acceleration – it  all makes us feel like kids again. But what we liked about the smaller 5.3-liter here was that it was a no-fuse engine. It’s quiet, refined, and does as it’s told. And mind you, this truck weights 5700lb, that’s nearly 4-tons. To keep fuel economy efficient, GM uses cylinder cutting technology at cruising speeds to cut off four cylinders. In theory it should work, however during our week we managed to only average 15 MPG’s combined on a 380 mile tank capacity. And we were trying to be gentle here.

Inside is where this Sierra shines its brightest star. The interior is handsomely executed with leather seating surfaces that could have been pulled from the LazyBoy manufacturer. And they’re lined with a carbon fiber design that gives it a unique touch. Fit and finish is nicely presented with soft touch materials and we like that there isn’t silver and black accents on every surface. Our sampled SLT was loaded up with some nicely appointed features like power adjustable driver and passenger seats, driver side memory settings, heated front seats, and Wi-Fi powered by OnStar. Our tester did feature a new tech option with its $495 Navigation system and that’s Apple CarPlay – it’s such a nifty system that completely changes the general GMC Intellilink system into a large 8-inch iPhone – it syncs with your phone showing text message alerts and with response capabilities, apple navigation, Podcasts, Pandora – basically the fundamental basics of your phone. 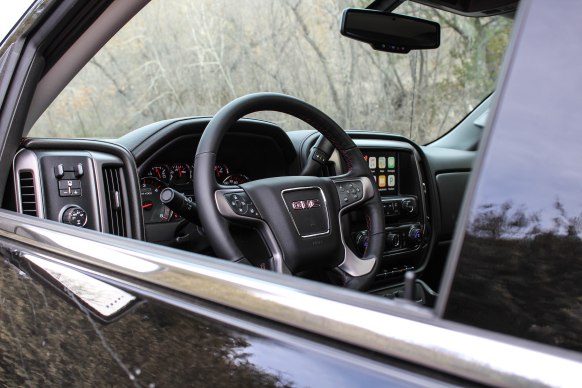 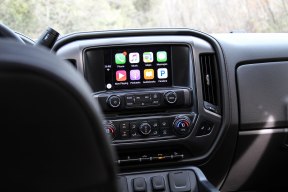 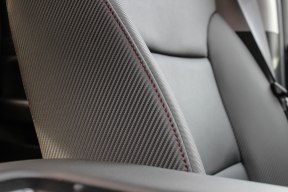 Fifty-four grand does seem kind of steep for something that holds a reputation of “taking a beating.” But considering its new transmission along with how much is packaged into the new Sierra, I’m sure buyers won’t mind paying a few extra bucks for some luxury features that will help them comfortably haul their toys around.