Riding on a cloud of marshmallows in a cabin so isolating we can dangerously sense our own thoughts pinning against us as we find ourselves cruising down the interstate wondering if Mathew McConaughey was right all along. But as we sit back in our sixty-thousand dollar top-of-the-line 2016 Lincoln MKX Reserve with the heated seats warming our buttock and getting a massage to work out the kinks from the days stress – you can’t tell us this isn’t the good life.

Take a step back for just a moment – look at it – look at the details. Those bejeweled LED headlights that illuminate the way to the doors, the stimulating lines in the hood, and then the way the taillights wraps the tailgate with a streamline look – its elegant and urbane. Then by adding this $695 White Platinum paint – it just augments its erogenous curves. 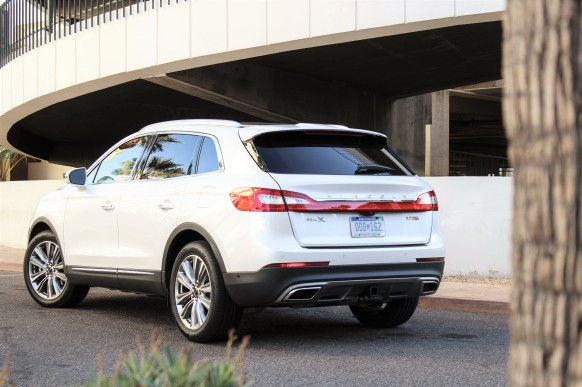 And that’s before stepping into this salient Cappuccino leather interior outfitted with 22-way power adjustable seats, exquisite dark wood trim and a massive Panoramic Vista that spans practically the entire length of the roof. Then we get to the part about describing how one of the most comfortable interiors is? It’s like sitting in first class on a flight from L.A. to New York – the seats are so soft and nurturing – they coddle your body and make you feel like you’re floating on air.

Lincoln’s interior design language speaks volume. No really. By eliminating a gear lever for this unique push-button gear select it makes the cabin more open and airy – surprisingly. This push-button system has received some bad-rap for being an unintuitive, delayed system – but we disagree – we like it, and that delay is no more than transferring a gear lever into gear. Besides let’s look at the demographic here – I think they won’t mind it either. Lincoln addressed one of the biggest complaints with their previous button-less design scheme and brought them back. The restructured layout works and has a very clean flow in its ergonomics – it’s contoured to the driver so everything is easy to reach without taking your eyes of the road.

Technology is a big boost here over the previous generation, starting with SYNC – it works! …to an extent. While SYNC has been much improved over the years, we’re still not completely sold. The interface has small touch screen buttons and aren’t very receptive to inputs. But it does have available on-demand voice activation with the ability to change radio stations, change climate control and even has text messaging alerts. As part of our $1650 Driver Assistance Package our MKX was outfitted with a Lane Keeping System, Adaptive Cruise Control, and Active Braking that works very well here not being too intrusive – it’s quite smooth in its gestures. But the technology doesn’t stop there, for another $1720 there’s the Active Park Assist with Front Parking Aid Sensors and forward facing camera noted under the Technology Package. Then we have the $595 Climate package that then brings in heated rear seats, a heated steering wheel and rain sensing wipers. 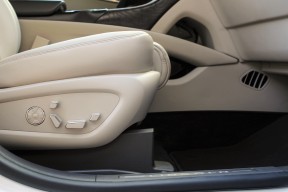 Some may call us cray cray for what we’re about to say, but the twin-turbo 2.7-liter EcoBoost V-6 found in our sampled MXK might just be too much power for its own britches. First it’s a $2000 option that replaces the standard 3.7-liter naturally aspirated V-6. But here’s the thing, this EcoBoost is really respectable. It’s good for 335-horsepower and gets to 60 mph in about six seconds from its gratifyingly charming six-speed transmission.

Where we get a little lost is that the 3.7-liter is rated at 303-horsepower, so the EcoBoost is only a mere 30-horsepower bump. Sure it has more 100 more lb-ft of torque at 380. But the 3.7-liter can easily carry this 4600lb crossover without any hesitations. While this EcoBoost is without a doubt a very good engine and will eat slabs of pavement in one lump sum when overtaking other drivers or drag racing your numinous neighbor in their Cadillac DeVille, we just don’t see the worth in the $2000 option. Especially when our average fuel economy barely hovered 19 mpg and a fuel tank that ate through half a tank after 100 miles of Premium liquid juice – and it’s not like we were trying to be efficient. 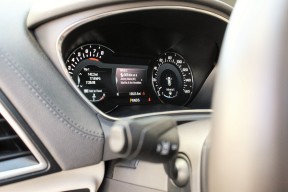 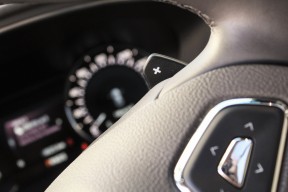 Now unless you’re German, the handling department is not usually a luxury crossovers forte and as we see here with light, numb steering it’s purely there for decoration purposes – but then again we don’t expect it to be. Lincoln is all about cruising and enjoying the ride and that’s what we have here – a cloud hopper. Riding on 20-inch wheels, there is subtle hint of road noise but the ride quality is supremely delightful – like floating on cloud nine. Now there is a “Sport” button on the dash that can firm up the suspension and tighten the steering wheel, but would you really want to ruin the ride quality of your Lincoln?

As seen here for the Reserve All-Wheel Drive MKX – it starts at a reasonable $47,650 – tack on the $15,000 in options that spread from those $1500 22-way power adjustable seats to the $4000 Luxury Package that offered those LED Headlights and supreme Revel Ultima Audio system – we were out of pocket just over sixty-three thousand dollars. That can be a sticker shock when you’re least expecting it. But if stand back for a second, and take in account how oh-so sweet this new MKX is, that is one check we are willing to write.