On an any given weekday, I find myself staring out of my second floor office in a multi-story high-rise, wondering “where shall I go, what shall I see.” I open up Google Maps, and start searching for a destination.  Originally, I had selected this place in Southern California, Borrego Springs – it was recently used as a media launch drive for the new Kia Sportage and featured some real bizarre creatures along their drive route. However, when I texted my friend Tyson to see when it was he was heading out to the Salton Sea (roughly in the same area), he was looking at the same weekend I was. So I invited myself to his party.

Friday was traveling day, set to depart Phoenix at 5:00pm. With emails and paper work running amuck, I ran 30 minutes behind schedule hitting prime time traffic. Luckily it was only 10 or 15 miles worth of I-10 headache before setting the cruise control to 80 mph and settling in for the boringest 250 mile drive to our selected Motel 6 in Indio, California.

Accompanied by Tyson and our buddy Jason who was coming all the way from Las Cruces, New Mexico had arrived hours before me. So in order for me to make it in time for dinner, there wasn’t going to be any time to stop for snacks, gas, or a pee break. At least the new Chevrolet Malibu I had on loan this week made the journey go quickly and comfortably.

After 3-hours of skipping music I didn’t want to hear, Indio was in sight and needless to say we skipped the hellos before jumping into Tyson’s Acura ILX and heading over to an Italian Restaurant called Mario’s Italian Cafe where the White Alfredo Sauce Pizza and Lasagna filled our stomachs and made everyone a happy eager camper.

Quick fuel up before heading next door to Motel 6

Starting our Saturday off right, we hit up Denny’s for a Grand Slam and to discuss the route at hand. Tyson, methodically planned out our route to visit several locations along the Salton Sea, Highway 111. The Salton Sea is technically considered a dead sea because the contents of the salt concentrations grows about one percent per year because it has nowhere to go – it is saltier than the entire Pacific Ocean. Our first stop of the day was to the International Banana Museum which happened to open at 12:00pm, but we were three hours too early. 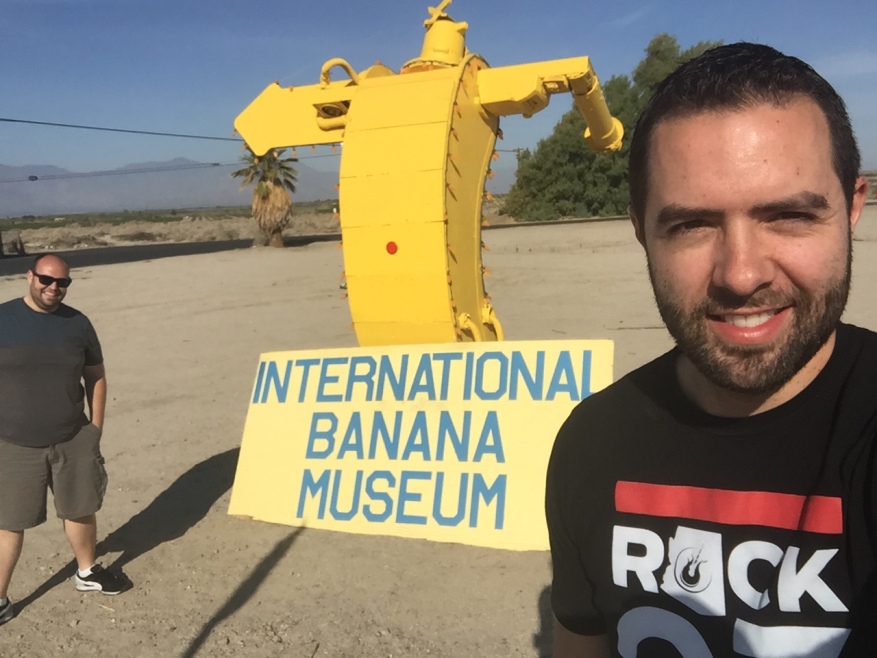 In its prime, North Shore, CA had a Yacht Club – but since the town lost its tourism, the Yacht Club has since been remodeled and turned into a High School/Community Center. Nestled on the shore, the scenery was spectacular and with the ability to drive up on the shore line, we didn’t waste an opportunity to do a photo shoot.

Our next stop was a small desolated town, Bombay Beach. Bombay Beach is considered to be the lowest community in America, located just 223 feet below sea level. Because of the rise in salt in the Salton Sea, the town’s resources and strive for tourism left the town basically abandoned. Driving through the unmanaged roads, houses were left bare for vandalism and hooliganism. We toured a couple houses and it was like something you’d see in the movies. With a quick turn off the beaten path we landed on one of the shorelines, but this was not one you’d want to walk on – the shore was lined with dead fish carcasses everywhere. I made a passing statement “I do not trust the bugs in this area.” And was eager to get back in the car where the smells were blocked out and the bugs were outside.

Surprisingly though, there are still a few people that live in town and there is a convenience store open to the public. Walking through, you would have thought it was a scene from The Walking Dead. The shelves were bare and the people were… suspicious. Except for this one women with a white 2006ish Jaguar XJ wearing a straw hat. Full of so much energy she excitedly informed us about Salvation Mountain and Slab City where people go to be free and artistic. Ironically enough, that was already on our list. So out of an act of kindness we bought her beer for all the stories she shared. 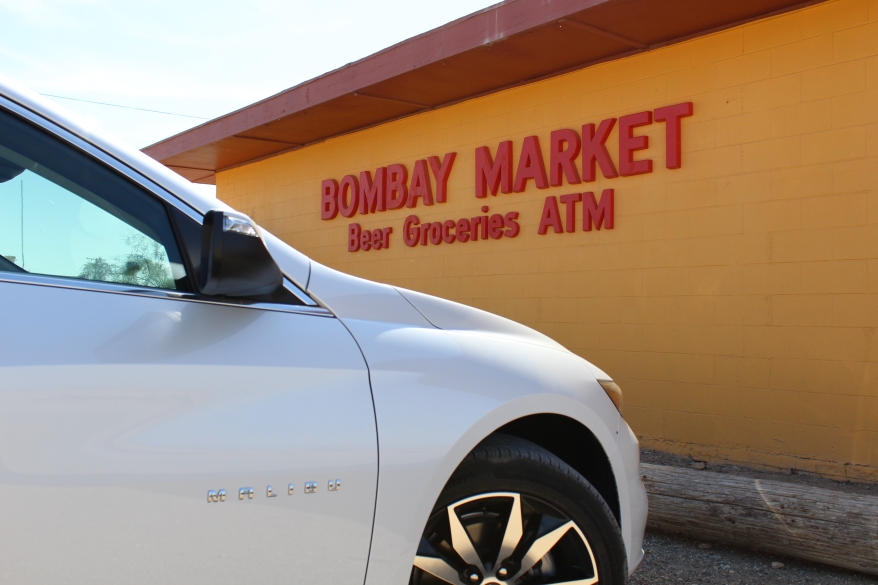 Salvation was our next stop on our list of destinations. It’s a mountain that’s been built out of adobe, straw, and thousands of gallons of paint. It was developed by a man, Leonard Knight who died early 2014. Since the early 2000’s it has become a landmark and brings people from all over the world to experience his envision and beliefs. 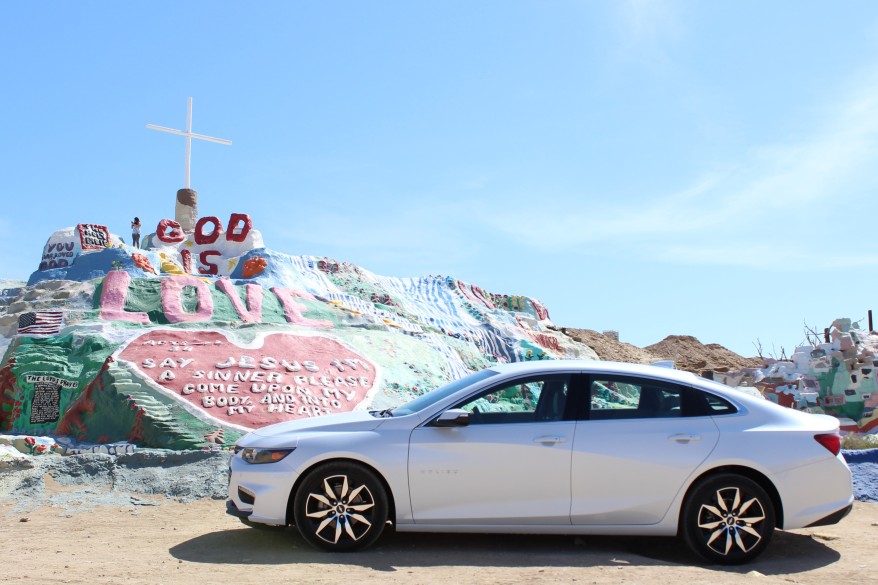 From there, Slab City was just a couple miles up the road where the land is free and squatters can live and reside if they can build up a residence there. While many of the homes are trailer homes, some are as unique as the artist themselves being built out of whatever they can get their hands on. We stopped at their public library for moment to see what was what and was greeted by two John’s who were overlooking the place for a one-legged librarian and her boyfriend Caveman. The John’s we’re extremely talkative and entertaining with tons of stories to share giving us advice and places to check out before skipping town. Unfortunately we didn’t have time to skinny dip in the river, get high in the hot springs or jump on stage Saturday night for mic night and get drunk with the locals. 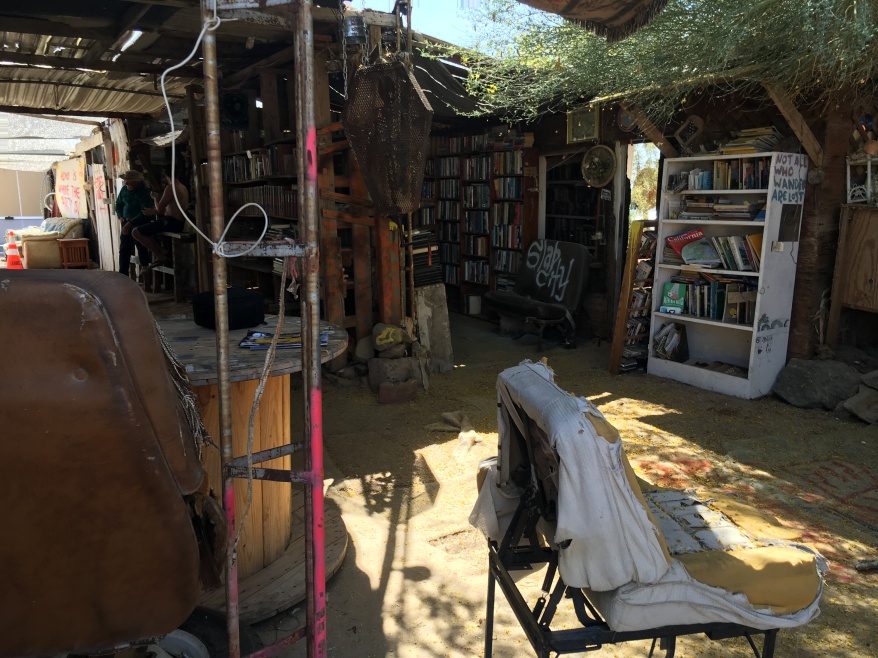