There are two types of buyers when it comes to an entry premium car segment – those that really just don’t care but want something nice, and those that want something fun, but the engine to have is not in their budget. Lexus’ newest sports coupe, RC, debut last year with the RC350 and the vigilant RC-F with a 5.0-liter V-8. Now, the new sports coupe has a smaller engine giving it the entry level title, RC200t.

You see, there is already a problem we see here… its price tag! $39,995! Doesn’t sound so cheap for an entry level car. Especially when the IS200t is a few grand cheaper, has more doors and more rear leg room and still the one we’d prefer. Not to worry though, the shock keeps coming… $4105 for the F SPORT package – it’s a chunk of change we wouldn’t mind scrounging up. After all the F SPORT does add in that handsome honeycomb spindle grille, the stylish 19-inch wheels, and a series of chassis upgrades to the suspension and transmission mapping – and you can’t tell me you don’t like that video game digital instrument cluster. $2610 for navigation is a must have – I mean, you can’t look basic – it’s like seeing green text on an iPhone – EW, get it together! 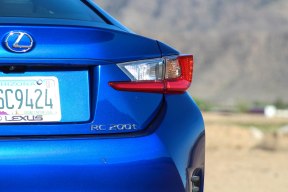 What throws us for a loop is the $460 for a rear limited slip differential. Why? We don’t need it. It’s not necessary here. The RC350 – sure, okay maybe, the RC-F – YES! But not the 2.0-liter turbo with 241 horsepower. There’s so much turbo lag going on, that even if you were aggressive in our driving style, we’d just end up looking like an idiot.

The biggest downfall to the RC-Series in general, is its weight. It’s fatter than a hippo going for thirds at the buffet. Our sampler here came in around 3800lbs, and you feel every single pound when stomping on the accelerator. Industry standard would consider is acceleration acceptable, climbing to 60 mph takes just under seven and half seconds. With 258lb-ft of torque coming in around 2000 revolutions per minute – it can be relatively quick at cruising speeds – dashing in out of lanes and passing motorist without questioning a gap. From a stop is where the turbo lag is most noticeably – it’s like it’s trying to decide if it’s an engine or an elephant.

If we get past the engine – what we have here is the idealistic GT car. The RC drives incredibly smooth and because it’s so heavy, it feels like a tank hunkered to the ground. It eats asphalt for dinner and never gets tiring. The F SPORT package is what really makes the RC incredible. It features an Adaptive Variable Suspension system that makes the ride agile and aggressive yet works as a smooth operator from inside its isolated cabin. As long as your driving style isn’t hostile, the RC’s steering is fairly responsive and the eight-speed transmission gracefully does its job.

With the F SPORT package, it does modify the cars ability to be more attentive if by changing the drive select mode into SPORT +. Accentually modifying the transmission and throttle responsiveness for a more “sports car” driving experience. But the world is not a race track and in this heavy car, with this small of an engine there really isn’t much thrill to be sought.

But this is a Lexus, and Lexus has one of the most comfortable premium interiors on the market! Topping it off, the F SPORT Package brings in one of the best seats in the business with contouring, body hugging front seats that are heated and ventilated. With it being a coupe, the seats are set up in a 2+2 fashion leaving not much room for rear passengers no matter their size.

With all the faults from the performance, what we enjoyed most about the RC200t was that it was a great everyday sports car. At the end of long day at office it was a comfortable, smooth riding, quiet car. However, with our tester topping out at $50,715 with all the added options – we say skip the turbo and go for the 3.5-liter V-6 with 306-horsepower. It’s quicker, sounds better, and is about $1000 more in the grand scheme of things.