It’s not uncommon for automakers to reveal new and upcoming products years in advance before they are release. It’s a marketing gimmick to build anticipation and hype for an exciting new creation. For quite some time, the new Nissan Titan has been just that, on the media’s brains since the spy shots hit the public back in 2014. But now that it has been a couple of years, has the new 2016 Titan exceeded our expectations or did it merely fall into the meh list of all the hype it had received?

Let’s get one thing straight here, the Titan is not your average pretty truck … and don’t let that massive chrome grille fool you either. It’s a workhorse! Behind those massive headlights and signature daytime LED’s is a heavy duty 5.0-liter V-8 straight out of the Cummins Turbo Diesel factory. An Aisin six-speed transmission plants 310-horsepower to the ground and 555lb-ft of torque gets it movin to 60 mph in over nine seconds. 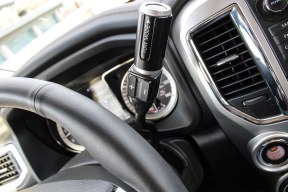 Driving one of these things is not for the simple minded driver. It weights as much as the moon and can tow nearly twice its size at 12,000lbs. Everything about the Titan is heavy; the steering, the brakes, and that chassis – which is a good thing. Anything this big, steering is going to be nonchalant as far as driver feedback is concerned; however, it does require driver involvement as it can be difficult to manage at low end speeds. You don’t ever really realize how much braking distance is required until you need to stop all seventy-five hundred pounds – even in this case, we were surprised how quickly it stops and the overall linear feel from the brake pedal.

What is very impressive is the chassis underneath – its firm and well structured. There’s no noticeable bend or shake in its construction. Expectedly, the suspension is stiff and jerky over bumps in the road, but can otherwise provide a solid ride and a tranquility of peace and quiet within the cabin. And that’s even riding on 20-inch wheels wrapped in all-terrain tires. Even fuel consumption wasn’t terrible – managed 14 mpg out on the highway. Woohoo!

In a vehicle that is three times the size of an average car on the road; interior space is vast. Three adults can kick back in the back with enough legroom to satisfy Shaq. And it’s comfortable too… great for long trips. Our sampled SL, which shall be the more popular consumer choice, had leather interior and power front seats.

Where we start to disagree with Nissan’s two-year stench on the Titan’s development is the quality of the interior. Yes it looks fine and there are some okay finishes to make it look all dressed up like the wood trim here. However, overall, it doesn’t feel of fifty-six thousand dollar truck. Some knobs and switches seem like a retro version from the 90’s, there are hard plastics everywhere, and if we look closely, some of the panels don’t even line up. Maybe its to withstand the test of time – maybe it was a cost savings – but compared to its competitors, a little bit of touch goes a long way.

Then we get to the technology bit – this infotainment system with Navigation and back-up camera… shall we remind you the cost? – and they put hardware that can be found in a Sentra. We’ve seen Nissan do better with the Maxima and Murano. The screen is too small, the buttons are ridiculous, it’s difficult to use and function while driving and every time we plugged our phone into the USB port; it constantly asked us if we wanted our music library updated – that was annoying.

In the grand scheme of things, the Titan does best at what it was built to be, a mule to the taskforce of labor. But if you’re looking to spend sixty-grand on something that provides a little more luxury and premium features over towing capacity and payload… maybe the Titan isn’t quite right for you.