In a market surrounded by crossovers, minivans are a hard sell when SUV’s carries a high altitude commanding view and just as much utilitarian capabilities. Plus if you bump a curb, you won’t hurt the wheels. That is to say though, it won’t keep automakers from still trying to hit a niche in the market.

For generations, Dodge has been the King of all minivans. So when they announced that the Caravan was to be no more, it was a sad day. But before we could dab away our sorrow tears, Chrysler released its replacement, the Pacifica. If the name sounds familiar, it should, it was a semi-successful crossover cross-breed in the early 2000’s – not quite crossover, not quite a station wagon – kind of had a personality disorder. Now, with the Grand Caravan and Town & Country being released to the retirement communities in Florida, Chrysler wanted to rejuvenate their brand and give their new minivan a whole new outlook.

Per Chrysler’s adverts, they call it “improve your Dad brand.” Riiiight. Chrysler’s moto here is that the new Pacifica is not just any minivan – it has similar design elements of a crossover… Hmmm… Yeah… we’re not seeing it. It looks like a minivan. It’s a nice looking van… but it’s still a van… it has sliding doors and captain’s chairs, that makes it a van. 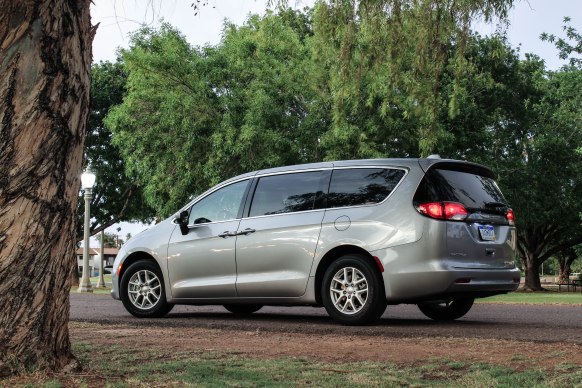 The Pacifica has five trim levels to choose from… all designed to fit a family’s budget. The LX is the lowest trim starting at $28,595 and can go up to the exclusive, elegant Limited starting at $42,495. Our sampler here came as generic as it could come one step above the LX as the Touring. This started at $30,495 and after adding a $495 Power Lift Tailgate, we were out the door $30,990.

It’s not all bad though, sure our Silver coated paint may have made it look like we rented this for the week, but let’s face it, this Touring trim will be seen in most rental lots and driveways across America. The great news is, there’s tons of standard equipment that makes it forgiving for it stylish short comings.

For several decades, Dodge has been the first of all their competitions when it came to the introduction of new features – after all, they were the first to present the minivan to the world in the first place. They were the first to bring in dual sliding doors, then added power to them, stow and go storage, and now they’re doing it again… only this time, you can’t really see it. The Pacifica is loaded with tons of standard equipment that go above and beyond the standard safety regulations with the addition of several new airbags, a rearview camera, electronic parking brake, and rainy day braking assist – these are just a few of the 100 new standard safety features.

All models get the same powertrain – a hearty 3.6-liter Pentastar V-6 engine and Chrysler’s 9-speed transmission. 287-horsepower is a healthy dose when the pedal get pushed to the metal dashing to 60 mph in around about 7 seconds. And when it comes to stopping, the brakes have a linear, quick responsive application – no worries in that department.

The Pacifica’s chassis has come a long ways from what we used to know. There is a sense of solid and refinedness to the underpinnings here. Structure welds and supports keeps the Pacifica from bending and rolling in abrasive maneuvers and yet provides a mushy comfy inattentive ride quality you’d expect. The same goes for the electronic steering – while it’s lack lustering in any form of driving precision, it has a nice heft and feel – it has a quick responsiveness to it that, almost made us feel some driving enjoyment. Shhhhh don’t tell anybody we said that.

The fact is, the Pacifica isn’t half bad to drive and the chassis is just the start. The 3.6-liter here is smooth and creamy thanks to that 9-speed transmission. It’s an absolute peach. And because of all those gears, we managed to see 20 miles to the gallon combined for the week and 450 miles of range on regular unleaded fuel.

In terms of comfort and durability, the Touring featured here is where the durability over luxury really shines. While it does express cheaper materials used throughout than what you would find on higher trim levels, this interior is built to last the test of times. The cloth seats here are an interesting fabric that are easy to clean and yet extremely comfortable – still wouldn’t recommend the gray with kids – we had to scrub out a few stains before giving it back.

Even though the Touring is on the lower end of the spectrum, it still had some unique features like the color TFT instrument cluster display, the 5-inch touch screen infotainment system and the three-zone manual climate control system. Remember stow-n-go? It’s not forgotten! Chrysler left one of the best features that the Caravan carried. The seats fold flat into a little cubby and opens the cabin to a world of Tetris possibilities. And when the seats are up, they can be used as an assortments of stow away items.

Sure, we can see where Chrysler is coming from with the whole “Dad Brand” moto – but unless you opt for the loaded Limited, it is still just a minivan. A comfortable road warrior people mover that eats up miles like kids eating up french fries. Even with our sampler being the consumer volume seller, Chrysler can keep its crown as the ultimate minivan – because this new Pacifica is ready to crush some of its competition.