Waking up the fact that I forget to turn the heater on in a hotel room on a bitter cold morning is enough to make me wanna stay in the warm cozy bed after only getting just a few hours sleep. But I have a long day ahead, best to just face the cold, bundle up and get a move on.  After a quick breakfast, I didn’t bother with any exploration around Cheyenne, that’s what Sunday will be for. I was a man on a mission, and with Mount Rushmore plugged into the Navigation, my five hour road trip north began.

Driving through Wyoming is nothing quite like I’ve experienced before – it’s isolated, barren, not a damn thing for miles. I drove 200 miles and went through two towns. Yet, the country side is absolutely beautiful with and the weather was stunning. And even though the roads were long straight, they were ideal for the Avalon Hybrid. It just ate up the miles as much as the bumps.

After driving for a couple of hours, I did a quick stop in a small quaint town called Lusk for fuel – even though it wasn’t needed – I still had half a tank and over 300 miles on the trip computer, but I needed to stretch my legs. It was easy to tell the town thrived off passing motorist with little boutique shops that catered to road trippers. If only I had time to go shopping.

Miles and miles and miles went by before I even got close the South Dakota – so much that I almost drove right past the State Line – not to worry – I stopped in time. South Dakota is completely different from Wyoming and it took just 20 miles to show why – mountains and pine trees and nice curved roads. This is where the Avalon Hybrid could have made some passengers nauseous, good thing I didn’t have any. There was even a strange bicycle structure in this little tiny town. 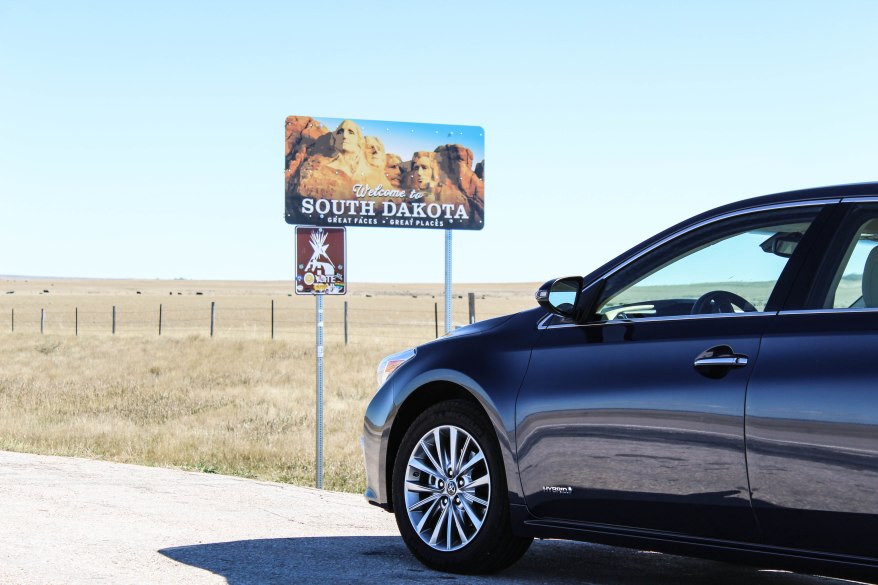 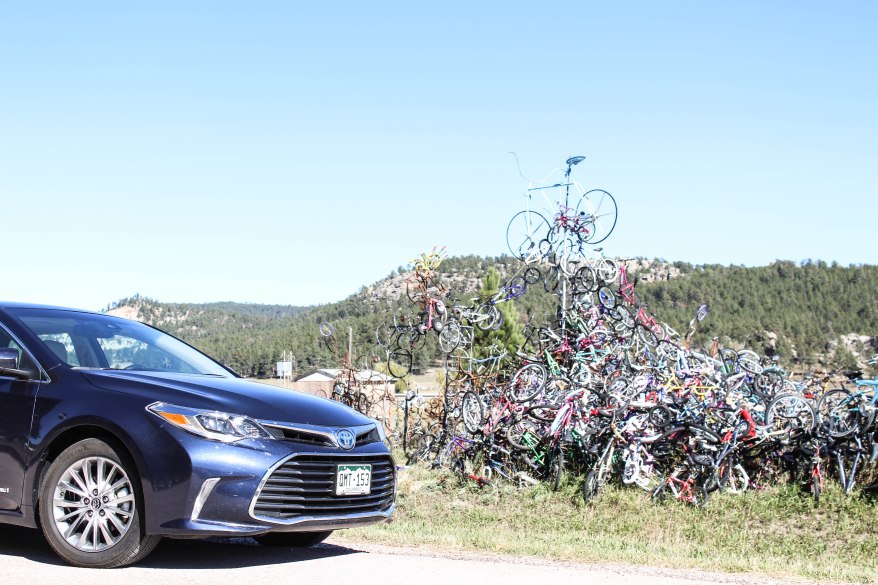 As I got closer to Mount Rushmore, the speed limit dropped dramatically, and the cops take the speed limit serious in this state, 5 miles over the posted 25 mph speed limit, and you’ll get pulled over – luckily I wasn’t one of them. Maybe it was a good thing Toyota didn’t put me a Lexus like I was hoping for. 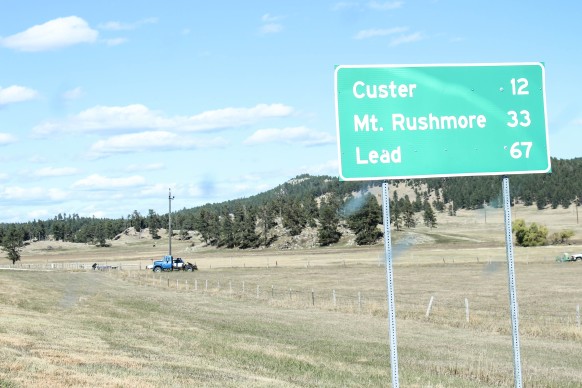 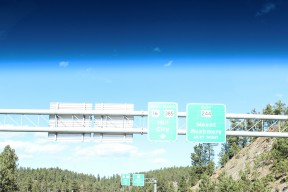 Mount Rushmore, yup there it is! Like the Grand Canyon, it’s a giant rock! Now, I’ve seen it – time to head back. Only this time instead of going back through Wyoming, I thought I’d go through Nebraska… it’s the same milage and time, why not – kill four states in one trip.

The drive back wasn’t all that it was cracked up to be, that southern western corner of South Dakota was gorgeous compared to the drive to the Nebraska border. I stopped somewhere halfway in a town called Hot Springs for some food at a place called Chops & Hops. Since I hadn’t eaten anything since breakfast, I was famished for a cold beer and a burger. While everything looked good on the menu, I wanted some beef – but my special way – bacon and an over easy egg – good thing the chef was willing to make it special for me. 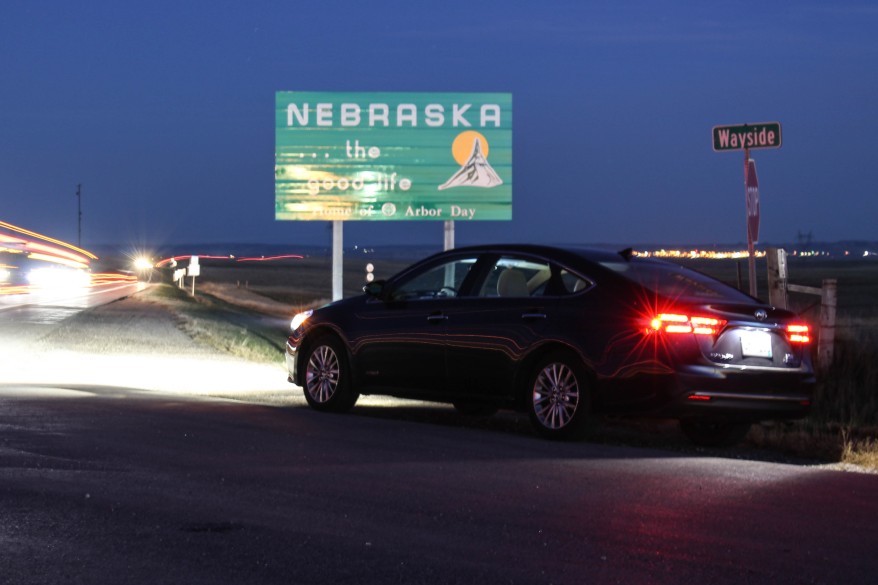 As I write, I’m watching the sun set from Chops & Hops. The drive back will be late and dark and that’s okay – night driving is calming with an empty road and the cold air. As the night got longer the roads became more and more empty – I would drive almost a hundred miles without seeing another car. Each town I drove through was desolated and empty – ghost town. So as I reached Interstate 80 to take me back into Cheyenne, where the speed limit was 80 mph, I couldn’t be happier. 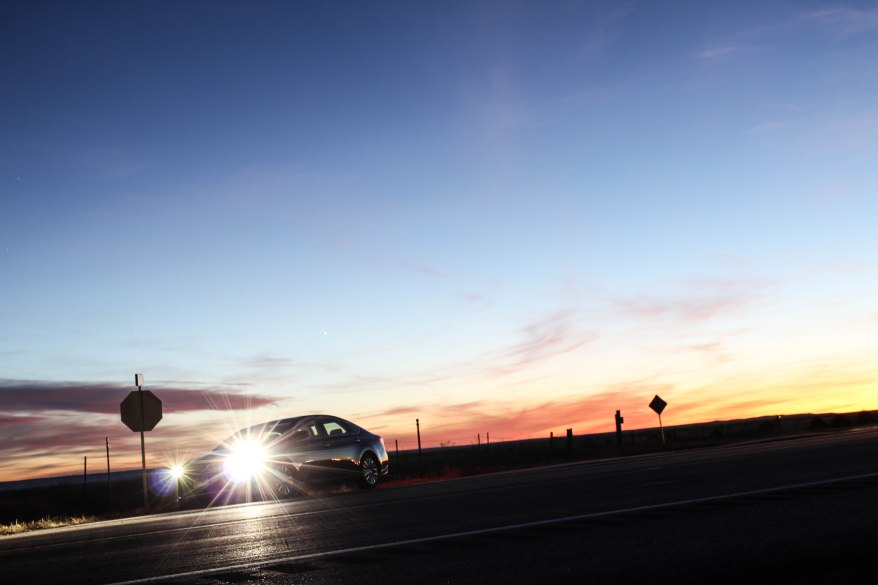