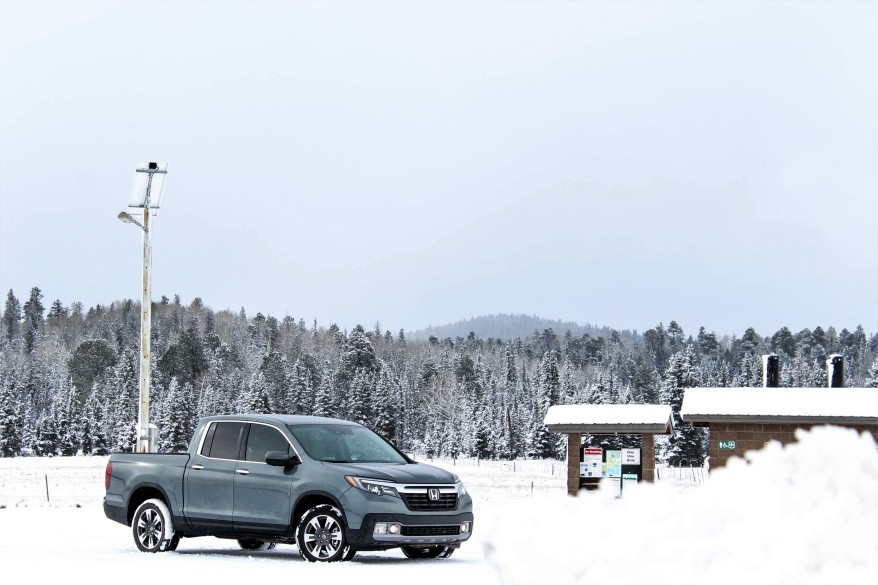 Playing in the truck game has some tough rules and quite the serious fan base with painted on abs. Honda is reentering the field for a second season with the revamped Ridgeline and the way we see it, it’s like the science nerd trying out for Football. So let’s put on our helmets and jockstrap and see if it has what it takes to play with the Varsity team.

All new from the ground up, the 2017 Ridgeline is not your traditional pick-up truck. Unlike a normal body-on frame construction, the Ridgeline supports a uni-body platform that has a little more car-like attitude. If you look at a Honda Pilot and Ridgeline side-by-side, they’re exactly the same in styling… almost. The Ridgeline carries over the same fascial features; however, Honda added some minor aggressive details to the lower bumpers and grille to give a more masculine approach – that – and it’s a little more capable if, say, you decided to bump into a tree on a camping trip. The plastic cladding is a little more forgiving in that sense. 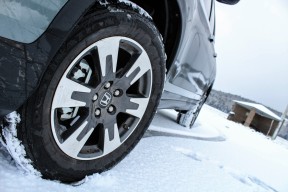 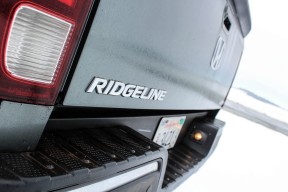 There are 6 available trims for the Ridgeline including a Black Edition. Ours was the top spec’d classified as the RTL-E with an all-inclusive price of $41,470. That means, while all the other trims are available with an intelligent all-wheel drive system, ours was standard – on-top of every other premium feature fitted to our tester.

Unlike beefer V-8 trucks on the market, the Ridgeline makes due with just a simple 3.5-liter V-6 capable of using all of its 280-horsepower. It’s no slouch either thanks to its i-VTEC engine, getting to 60 mph takes about six and half seconds. Let’s face the facts, unless you’re towing something big, say, a house, the V-8 is just a grunt. The V-6 in the Ridgeline is like a smooth operator sneaking in and stealing the quarterback’s cheerleader girlfriend. It accelerators smoothly and shifts crisp using a six-speed automatic. And with 5,000lbs of towing capability, who needs a hotel after prom when you can hitch a pop-up trailer to the back.

Because the Ridgeline is based off a uni-body platform, it does not drive like a truck having that rugged – grrrrrr – get out of my way, I’m bigger than you mentality. It’s actually quiet and relaxing. The chassis adjusts well to the road or terrain that felt like driving on cloud 9. The suspension is made up of multi-links in the rear and struts in the front that helps maintain that carlike composure verses the truck’s playbook of firmer is better. The Ridgeline also steers much more fluently – it’s no Civic Type R but maintains a good balance of comfortable and controllability.

Also unlike a normal 4WD pick-up where we’d have to select between 4WD-High or 4WD-Low – the intelligent all-wheel drive management systems provides a simple terrain module that can adjust per the situation at hand. Selecting between Snow, Mud, Sand, or Normal situations modify the traction control system, throttle position and overall behavior on how much power is delivered to each wheel. Being headquartered in a city that gets an hour of snow every 10-years, we pointed our nose north to find that fluffy white powder we constantly see on the news. Seeing it took nearly 5 hours to find some, we engaged Snow mode when applicable and couldn’t honestly tell you a difference – however, considering we’re back to home base, it clearly works.

With our top-spec’d Ridgeline, we were dazzled with an array of comfort features and technology that makes everybody confused when trying to talk about it. Crème white leather filled the cabin providing power adjustable heated front seats, and a memory feature for the driver. The touch screen interface is quick to the touch but complicated to use with menus galore – which makes us happy there’s Apple CarPlay and Android Auto. With this RTL-E Ridgeline, it is also hosted with all the latest techno safety features that’ll warm your heart. 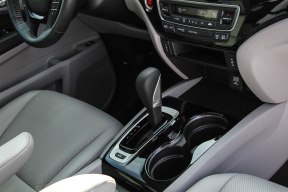 Like the Pilot, the Ridgeline is very nice; it’s comfortable for the driver and passengers. The back seat sits high and provides adequate legroom and the odd three-zone climate control keeps everyone from complaining. But here’s what makes the Ridgeline something special and stands out from those other jockletes – its bed! It’s got a standard bed just like the competition and it’s beg enough to haul many things from the Home Depot Garden Center. However, the tailgate not only folds down, but swings out – much more easier access to the cargo. Then with the tailgate open, there’s another storage bin embedded in the truck – whaaaat! Honda has even fitted it with a drain hole, so you could accentually put ice back there and keep things cold like drinks for the tailgate party before the big game. But here’s the real kicker, the bed has a weather proof speaker built in, as long as the truck is on, you can play anything on the outside. Shut up!

Now, here’s the reality – Honda isn’t trying to be a jock – they’ll never fit into that jockstrap. And the Ridgeline expresses that. It’s not a truck for truck people, so you truck people can just hush-up. The Ridgeline is ideal for those that want a smooth riding, comfortable daily vehicle that can run-a-muck in at the do-it-yourself building supply store. The Ridgeline is everything it needs to be, and then some.