After the crossover market has been saturated with carpool lane hogging, Starbucks drive-thru Frappuccino ordering, my kid is an honor roll blah blah soccer moms, there is still one SUV on the market that will bring a can of whoop ass to a soccer game, cause ain’t nobody going home without a bruise or two.

The Dodge Durango is not an unfamiliar face to the crossover segment and is the last of its kind to still carry the odd combination DiamlerChrysler heritage behind its infrastructure. This means there is already a problem – its age. The Durango is coming up on 7 years with its current chassis development, and as we’ve seen with other mommy-mobiles like the Toyota Highlander and Ford Explorer – there are some more refined engineering on the market. However, none of that really matters because of one very important piece, its 360-horsepower 5.7-liter HEMI V-8.

There are six trim levels to choose from, but the only way to get the HEMI V-8 is with the Citadel or R/T, as tested here. All the others come with standard with the 3.6-liter Pentastar V-6. There is something special to driving a V-8 – whether is the grumble between our toes, the intoxicating power at our finger tips or a dominating demeanor, but we can help but feel like kings.  While the 8-speed transmission is as responsive as a teenager playing video games, the Durango R/T can leave a set of treads behind getting to 60 mph in just under 6.5 seconds. 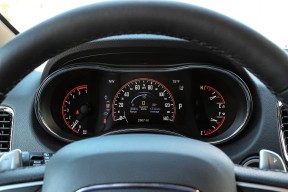 Just about every car on the planet has two buttons on the dash, Eco & Sport. Like the Durango these buttons are generally in area that can’t be found and are hard to reach – but unlike a sport button you’ll find on a Nissan Pathfinder or Toyota Highlander, this one actually does something…ish. The transmission doesn’t necessarily get any more motivated and the steering remains as numb as a Botoxed upper lip, the noise on the other hand – well – it certainly worked its way up our trousers. The exhaust gets more grumblier and at acceleration the thriving V-8 is completely intoxicating – manage the shift points correctly with the right amount of throttle engagement and the exhaust will snort like a pig in heat.

Driving the Durango is everything you would expect out of a modern crossover. The ride quality manages the road imperfections and adjusts appropriately to bring a quiet and comfortable balance into the cabin. The steering provides a subtle hence of responsiveness while engaged in sport mode – however the end result felt numb – even after changing the settings from Normal, Comfort and Sport. For as much as the Durango tries to be a performance crossover, driving it like a sports car is as thrilling as skydiving. Pushing it to the edge of performance on a mountain road left us with sweaty palms and loose bowels. Once on flat land, we found ourselves with a rather crooked smile and childish response to do it again. The soft suspension participated to countless body roll and the brakes showed fade under extreme conditions – we’re guessing when Dodge finally launches the Durango SRT8 with 475-horsepower, it won’t have these kinds of faults.

No one can’t deny that the Durango is one handsome brut. With its chiseled physic and muscular aurora, it wreaks of masculinity. Our Durango R/T arrived wearing a dark grey suit with red interior lining and 20-inch shoes that completes the ensemble for one sexy piece of meat. Over the last couple of years the Durango has received some minor tweaks to keep it on the radar for buyers, like HID headlights, LED daytime lights and the now Dodge symbolic LED racetrack rear taillights. For 2017, the Durango now incorporates a new GT trim level that replaces the Limited as well as some new appearance packages: Anodized Platinum, Brass Monkey and Blacktop – none of which was fitted to our tester. 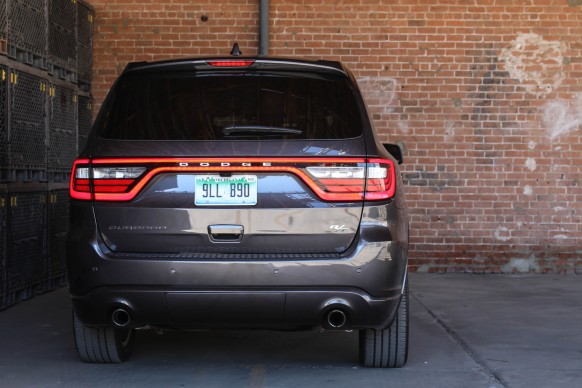 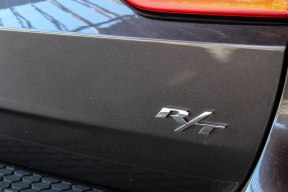 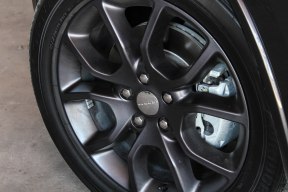 The Durango is a mileage eater, just ask its fuel tank – the interior is as comfortable as business class on an international flight. The seats are large and supportive for long journeys – being a crossover, it’s only natural that rear occupants find commodious room to shuffle about. Even access to the third row is simple – while there is no classy way getting back there, there is room for an adult or two with enough leg room to make them last more than five minutes. The interior is handsomely outfitted with plenty of soft touch materials that give the Durango a more upper crust feel. The Uconnect however is a cumbersome interface. So much operates out of this system it’s hard to keep track and becomes distracting. 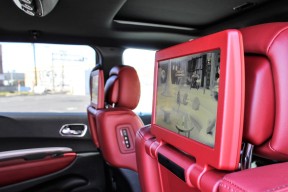 While the Durango is no longer innovative and cutting edge of technology, it’s got soul and passion – something crossovers just don’t have. The Durango is not just an ordinary diaper bag on wheels – it’s an entertainment fun house for the whole family.