Not Quite A Jeep Thing, But Getting There: 2017 Jeep Compass Limited 4X4

Since coming into the market in 2006, the Jeep Compass has been a poor sight in the compact crossover segment leaving the majority of its production numbers to the rental lots at the airports. Between its sibling the Patriot, the Compass shared in equal partnership as the Jeeps common consumer purchase for those that couldn’t afford the more expensive Grand Cherokee or the Wranglers inefficiency to produce more than double figures in fuel consumption.  In 2011 when it was refreshed to fit more in line with the Grand Cherokee, its Jeep like curves attracted more buyers, however, in the end, its cheap build quality and lack lustering concept made it a disappointment. Jeep; however, didn’t give up on this growing compact crossover segment and for 2017 made a whole new Compass, one that may actually move product.

The new Compass is everything we had hopped from Jeep, its architecture stands from the smaller Renegade platform but its larger cabin and cargo capacities fits it just below its bigger fraternal Cherokee. There’s no denying that the Grand Cherokee is its father either, carrying similar attributes and traits. Its attractive front stature has a more premium approach and with our tester having the $895 Advance Safety and Lighting Package, the HID headlights and LED Daytime running lamps are a pleasant sight. The Compass continues its shared dispositions continuing the squared off wheel arches and high belt line while its stubby rear end features a little more of a European flair. Part of that lighting package adds in LED rear parking lights, but not brake lights – bummer. The Compass also comes riding on different size wheels varying from 16-inch, 17-inch, 18-inch and 19-inch wheels. As such, our tester featured the upgraded, trendy $895 19-inch polished black wheel option. 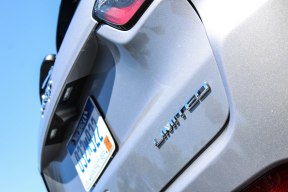 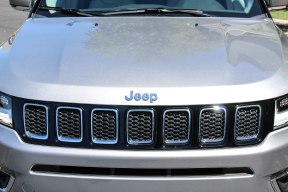 So Many Gear, Not Enough Power:

Coming in four trim levels, our top trimmed Limited starts at $28,995 while the base Sport front-wheel drive starts at a low $20,995. The base Sport and Latitude has the option to add four-wheel drive at a $1500 increase, the Trailhawk and Limited both come standard with 4×4. Across all trim levels, the Compass uses a 180-horsepower, naturally aspirated 2.4-literfour-cylinder – the base Sport and Latitude has a manual option with a six-speed gearbox to it, or if an auto is in your favor, the front-wheel drive only version comes with six forward gears, while the off-roaders get stuck with a lazy nine-speed automatic. The Compass isn’t geared to be a sporty crossover; however, taking over 9 seconds to 60 mph is a rather disappointment. Its four-cylinder engine and multi-gear transmission is a bit of a lethargic cow – the upshifts are slow and has to cycle through multiple gears to downshift making planning ahead for passing junctions a work of art – even at 75 mph on a straight, level highway, 9th gear is never engaged by the automatic unless its manually shifted through the gear lever. And by no means is it quiet – at high revs, the engine is buzzy and sends vibrations through the cabin. 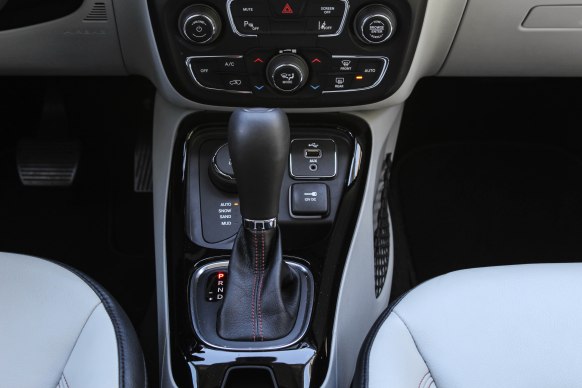 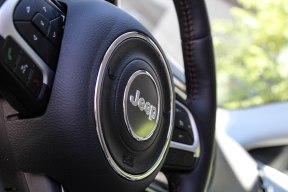 Granted, the nine-speed transmission is driven towards achieving fuel economy, so is the start/stop feature that shuts off the engine at stopped junctions. But summer time in Arizona calls for cooler temps in the cabin which never shuts off the motor and because our foot found its way closer to the floor than we usually like, our fuel numbers we’ren’t exactly the outcome we were hoping, averaging just under 17 miles to the gallon. When the start/stop feature did work, it wasn’t exactly the smoothest of systems we’ve seen from other manufacturers.

With the Compass Limited being the more premium trim, it rides a little smoother than one would expect from the Trailhawk with its 17-inch off-road wheels. The Limited carries itself in a poise manner with proper road mannerisms and a comfortable chassis. Handling isn’t going to be ideally on the sporty side of the mountain, but as we learned with the engine and transmission, it’s not geared to be as such. The Off-Road portion of the Compass is quite interesting utilizing a Multi-Terrain select that allows the option between Mud, Sand, and Snow. Or for those that don’t quite understand how any of that works, Auto Mode will adjust the four-wheel drive system for you. On the Trailhawk however, the Multi-Terrain Select also comes with Rock Mode as well as a locking differential with Four-wheel drive low and downhill decent control. 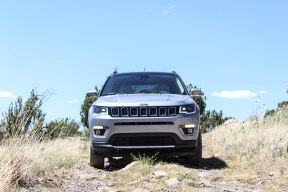 They Call this The Panda Express:

The interior is as premium as ever – which is say a lot from where it came from. Its use of materials, we feel are on pare with its $28k price tag not feeling overly cheap but not so much on the premium side that one may find in other brands. The design of the cabin is centered around the large 8.4-inch Uconnect screen – a 5-inch touch screen comes standard along with Apple CarPlay and Android Connectivity. Its interface has been updated slightly having a more intuitive functionality and a crystal clear high definition display. Complaints did falter that the audio control and automatic climate control features, below the screen, were too low – it however can all be still controlled through the Uconnect screen.

Our two tone white on black leather combo was refreshing – but as anybody who has kids knows the white leather won’t last and even with 5000 miles on our tester, the rear seats were already starting to show dark spots from passengers. It is a comfortable interior with the driver seat being power adjustable and providing a high riding position with a clear 360-degree view. The rear passengers can find more than plentiful leg and head room with an easy to access seats that sits high enough for long term comfort. The Compass also includes rear seat a/c vents and a USB power port. Compared to some of its competitors like the Honda HR-V, Mazda CX-3 and Chevrolet Trax, the Compass does offer the most cargo capacity – however, whereas the Compass is more geared to be an off-roader with its extra ground clearance it provides a high access lifting.

Every vehicle has its pros and cons and while the Compass has a few cons against it, its overall stature and off-road capabilities will be more in the consumer mindset. Even with our Limited starting at $28,995 – one does have to be careful with the options list, opting for some of the safety features that include blind spot monitoring, lane departure warning, forward collision warning as well as parking sensors, power lift tailgate and even a spare tire that pushes our sampler past $34-grand. And that’s before options like a tow package or the panoramic sunroof which can push the Compass closer to $37-grand – in which case, the Cherokee may be a better alternative.