In a world surrounded by blah, driven mostly by Uber drivers and people with sticky finger rodents, there comes a compact car that, every once in a while, can put a big ole grin on ones face. That car is the Volkswagen Jetta GLI.

More Than Just a Pretty Face:

First, it’s such a looker, isn’t it? In its speed demon red paint job it generates an understated design that exploits its attention through the smallest of details. Featuring GTI characteristics, the GLI is masked with flair and passion – the red brake calipers glistening through the 18-inch alloy wheels, the red lipstick over the piano black grille and the dual piped chrome exhaust exhibits a throaty note that tingled our inner childhood boy disobedience.

Much like the GTI, the Jetta GLI uses the same 2.0-liter turbocharged power plant under its hood. Sprinting up 210-horsepower through its six-speed manual transmission, the Jetta GLI hauls to 60 mph in just under 6 seconds. A dual-clutch DSG six-speed automatic can come at an $1100 upcharge, but really, why deny the opportunity to enjoy this slick shifting, smoothing driving machine. The manual is an absolute peach when providing a drivers connection to the car – the clutch has the right amount of weight behind it sensing a bit of sport in its spring while the gears just glide through one another like spreading jam over melted butter.

Driving a turbo has its up’s and downs though – the GLI’s turbo here comes in around 3000 rpm and peak at 5000. Meaning, while driving under 3000 rpm the Jetta GLI can be a bit of slush with limited torque and turbo boost which requires some clever downshifting when masking a passing routine on the city streets. Luckily at highway speeds, the GLI doesn’t really reflect this problem when in 5th or 6th gear, it manages enough turbo boost to move along without the need of a dramatic downshift. 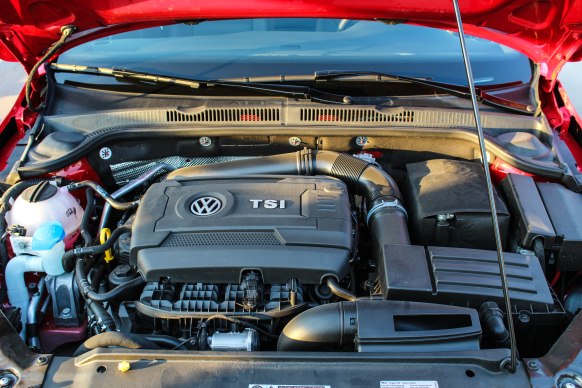 Of course, having similar GTI qualities, it handles as such with crisp, responsive steering – it’s light and nimble with excellent on center feel. That chassis feels as tight as drum providing a superior ride quality while exuberating a sporty driving demeanor that only encourages bad behavior. This did damper our fuel consumption however as the Jetta GLI was a bit on the thirsty side averaging 17 mpg during our daily routines – granted we enjoyed the GLI’s throaty notes more than we did the fuel economy. On a good day however, the Jetta GLI is nearly guaranteed to return some highway investments with a 27 mpg average, just as long as we’re not behind the wheel.

All in the Details:

The Jetta GLI is like any other Jetta we’ve sampled with a comfortable, well executed interior. Being on the more bland, corporate side, some of the GLI details tend to pop out like the red stitching in the steering wheel and seats, red gloss strip on the dash board and the GLI badge pasted on the steering wheel. The interior is averagely comfortable with a leatherette interior, power adjustable driver seat, and enough rear passenger leg room to be a weekend Uber driver.

The Jetta GLI doesn’t skimp on the features list either, considering it does have a trailing 30-thousand dollar price tag. Things like navigation, blind spot monitoring, heated front seats and a sunroof all come standard on the GLI. The newest software update from Volkswagen incorporates an easy to use touch screen interface that now offers Apple CarPlay and Android Auto connectivity. The only disappointment we found with the Jetta GLI is that it cannot be optioned with the HID Lighting Package and Driver Assistance Package that brought in adaptive cruise control, lane departure warning and automatic emergency braking. 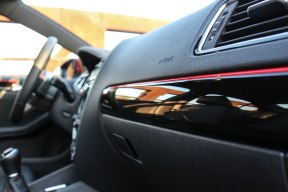 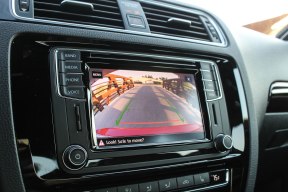 If a hatch isn’t quite your thing, but still want a sporty, fun to drive compact sedan – the only thing competing against Volkswagen is the new Elantra Sport and Civic Si. However if exotic curves aren’t quite your thing, then the Jetta GLI that expresses its more sporty heritage through its underlining details may be a better fit for you – after all, it’s the GTI of the sedan world.