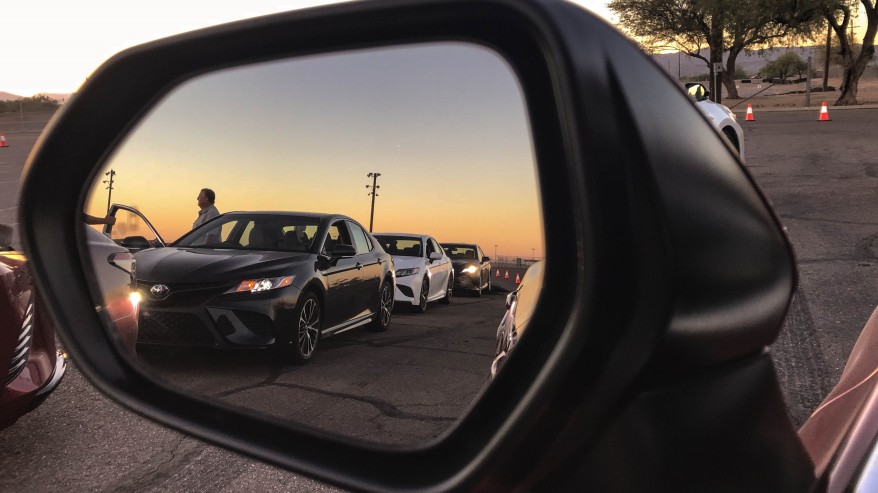 In light of the family sedan struggle, car makers are putting their right foot forward into developing cars for the next generation of buyers to come. The once-upon-a-time millennial Scion owners of 2003 are growing up, as are their family values. Toyota recognizes there brand needs a major overhaul if they want to stay as young and hip as their buyers and thus a new Camry was in deed due for a massive overhaul.

Toyota started to phase out their boring lifestyle when they did an extensive revamp on the Camry back in 2015 adding a sportier side to their family life. That was just the beginning of something new and refreshing. For 2018, Toyota has gone to the drawing board and created something that is quite un-Toyota-like, a Camry that drivers can actually enjoy. 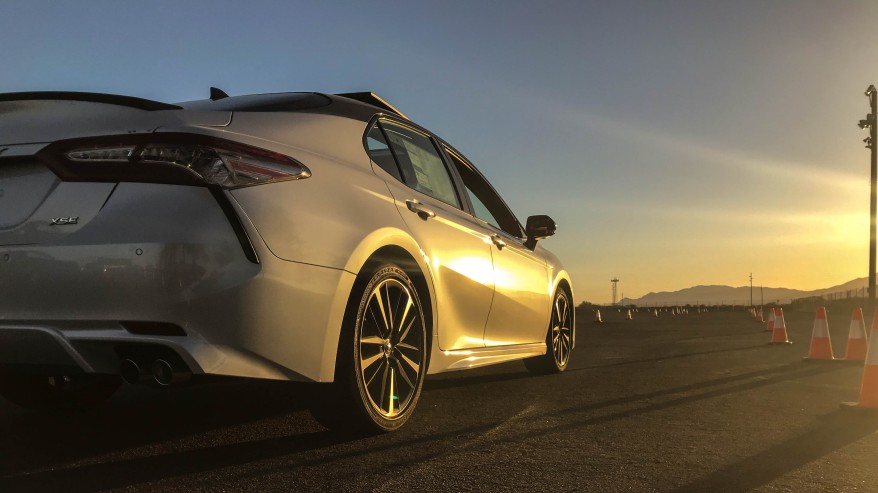 To bring light to the new Camry, Toyota hosted a track event for all of us Phoenix Media reps to come out and push it to the edge of its limits, see what it’s really made of. Considering the course was only 15 seconds long, it was like a being on a roller-coaster, the fun was over before it really ever began. However, in those 15 seconds we learned a lot – a lot about its new energetic handling – it’s new well engineered, defined chassis with double wishbone style multi-link rear suspension system – the new available engine options – and its new eight-speed transmission.

Toyota realizes their product was boring and unenthusiastic – it was a product for the sensible minded people that just wanted a car to get from point A to point B. Times have changed, and point A to point B is merely a stop over to get to point Z. Toyota wanted their new Camry to exhibit passion and excitement, something a typical Camry owner would never think of being. Well, consider us won over. 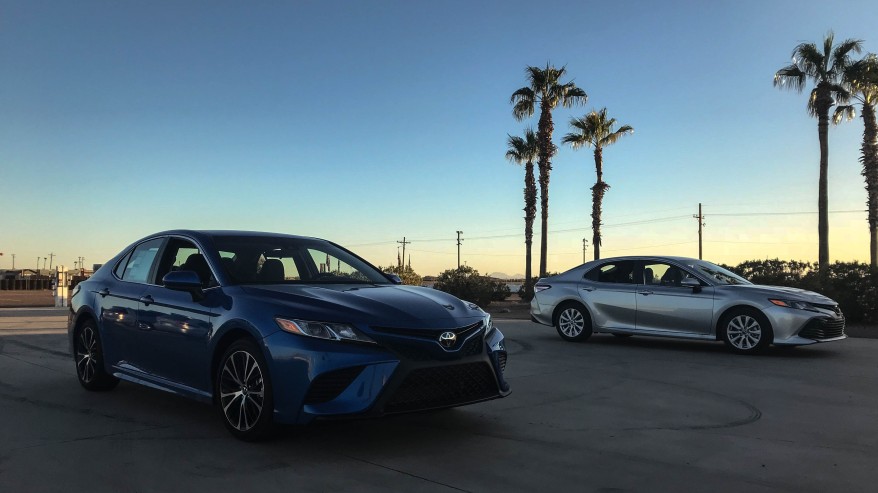 The new Camry is sexy. It’s got curves all over and even on the most basic of trim levels, it speaks louder than words. It’s a car that can be stared at and be motivated to drive the long way home. With a whole new construction, the new Camry gets a new platform under its sheet metal noted TNGA (Toyota New Global Architecture.) The Camry has a lower roofline and now hugs a ½” closer to the asphalt. It now has a wider stance and poses a sleeker look without sacrificing any interior space.

Sometimes seeing isn’t always believing, we have to feel and experience the changes. Seeing that the Camry received a new double wishbone rear suspension system, we can feel the chassis work more aggressively to sustain a more hostile driving style. The suspension is fully independent with a new double wishbone style multi-link rear suspension system that expresses more agility and confident composure. The electric steering has been boosted to provide more of a composed feel for the car and responds quickly to inputs given. Braking is even strong than before with a quicker, shorter stopping distance from 60 mph and able to turn the wheel aggressively why applying force to the brakes to avoid a collision. 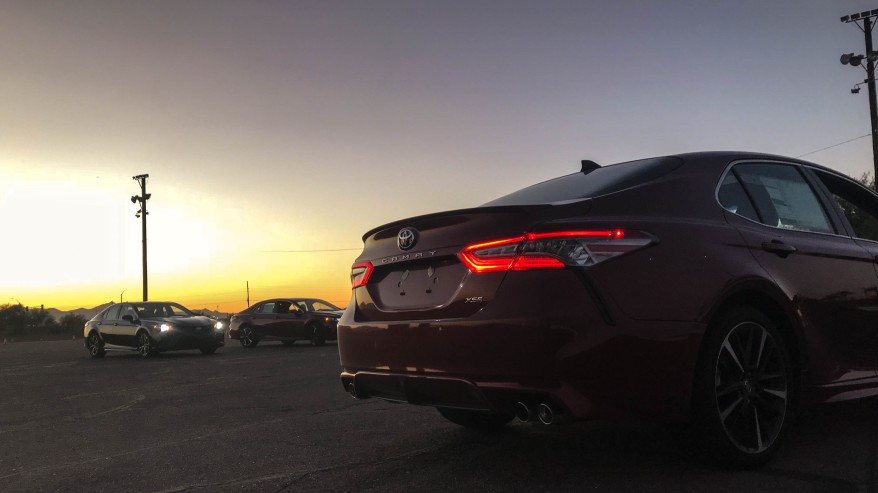 While most manufacturers are doing away with their old-timer’s V-6 engines and moving into a more fuel efficient turbocharged system, Toyota reinvents it with a whole new 3.5-liter V-6 as well as a new standard 2.5-liter four cylinder engine. The 2.5-liter four now puts out 25-additional horsepower over its previous generation with 203-horsepower while the 3.5-liter V-6 sees over 300-horsepower with over 25% improved fuel economy figures. The Camry will also feature the carried over 2.5-liter Hybrid system.

Stepping up its premium game, the Camry features a new interior with premium, quality finishes throughout. The cabin feel more upscale with rich materials and there is even a red leather option on the available XSE trim level. The Camry also comes available with a larger 8-inch touch screen interface a panoramic sunroof, and a colorful heads-up display. Trim levels start at $24,000 for the base LE and up to the XSE for four-cylinder engine models, XLE and XSE have the option of stepping into the V-6 territory while the Hybrid is exclusive to the LE, SE and XLE. Prices can topple over $37,000. 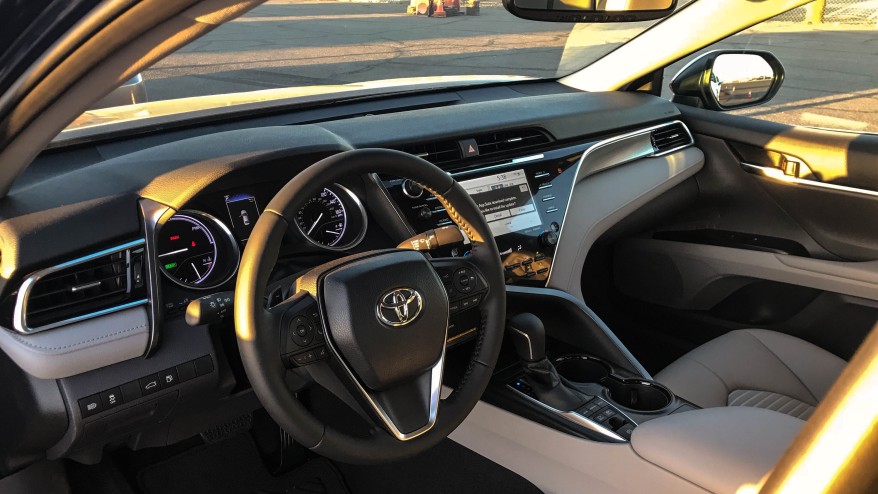 Along with a host of 10-standard airbags, the new Camry will feature the latest in Toyota Safety Sense that will include Lane Departure Warning, Adaptive Cruise Control, Pre-Collision Alert with Automatic Braking and Automatic High beams. A new available Driver Assistance Package will be offered on the Camry that will also include Blind Spot Monitoring, Active Lane Keep Assist, Full Radar Control that will bring the Camry to a full complete stop, and automatic rear-cross emergency braking if it detects on-coming traffic or pedestrians while in reverse. 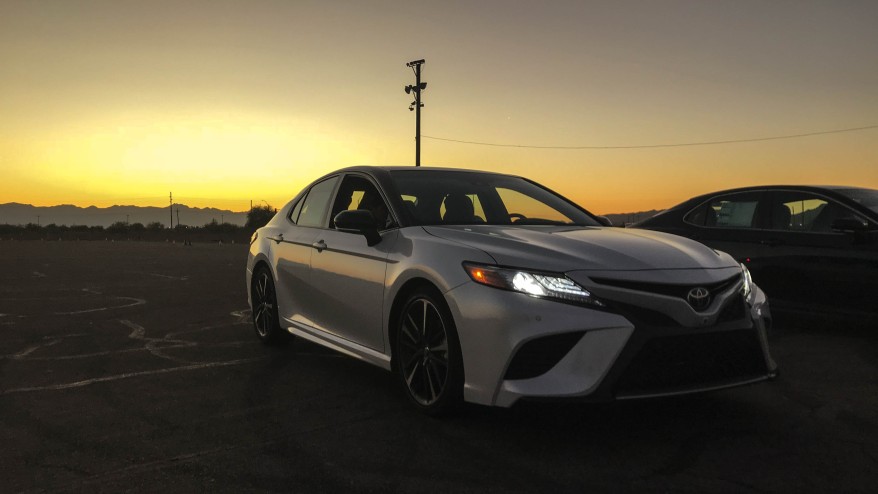 We are very excited for the new generation Camry and what Toyota has in store for the future of their products. In our 15 seconds of behind the wheel time in each available trim, we got a small glimpse into the world of a new Camry owner. We’re looking forward to more time behind the wheel, hopefully in the not too far off future.