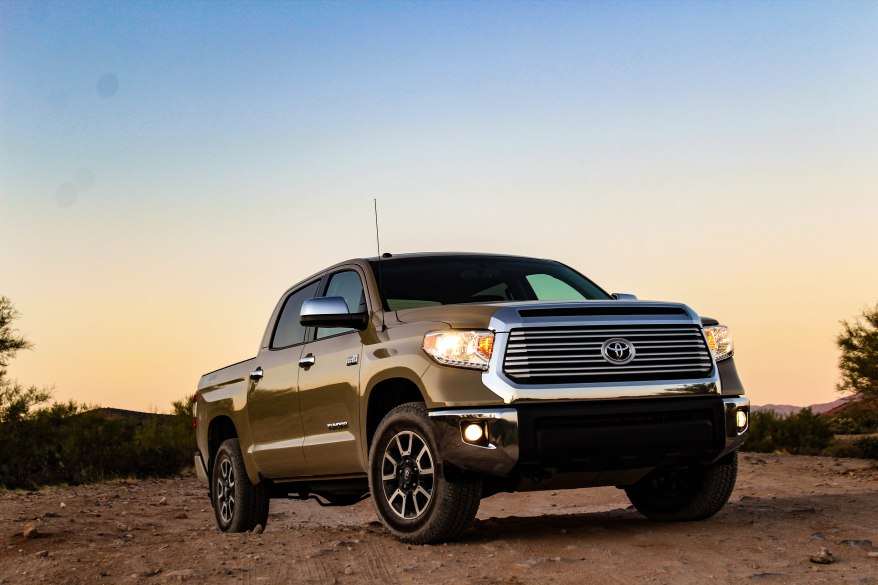 Have you ever been in an “oh shit” moment? A moment where reality is now an enemy and have to face circumstances at hand. Well these guys were. And the fact that I was in the right place at the right time with the right truck made all the difference in these guys’ lives.

On a Sunday afternoon, I found myself in the situation much like every week – where to photograph and what time to photograph the truck I had on loan this week, which was a 2017 Toyota Tundra Limited 4X4. Its Quicksand paint was an idealistic contrast against our Arizona desert landscape and ultimately knew exactly where to shoot it. In this situation, timing was everything – every decision I made along the way to this deserted area all led me to this final point – where this random stranger, who I didn’t know and have never met walking along the side of a dirt road, miles from civilization,  would be in need of some roadside assistance, or as we started calling, Operation Razor Rescue.

A few miles out, this guy, who I never did catch his name, his four-seater Razor clipped a rock and snapped the axle and the suspension rod pushing the wheel off its bearings. It was undrivable. In the process to go rescue his razor, his Chevrolet Silverado, while towing a trailer, got stuck in the sand, which was a little deep in certain areas. Not to worry though, Toyota is known for their 4X4 systems. The first step was to obtain his trailer, hitch it to back of the Tundra and drive the few miles out to where his razor was broken down.

Upon arrival, his fellow friends managed to get the Silverado unstuck… saved me from having to pull them out. But with the fear of the Silverado getting stuck again, we hitched the trailer to the Tundra and trucked on through the thick sand and deep, further into the desert… naturally the Tundra didn’t even break a single sweat. With the upgraded $100 TRD Off-Road Package the shocks and dampers kept everything well in control, the suspension maintained composer absorbing the ruts with ease while the dampers controlled the steering wheel allowing for better mobility and control. The upgraded $85 TRD Sway Bar also kept the chassis in check maintain balance over tricky situations and unity within the chassis for better rigidness. 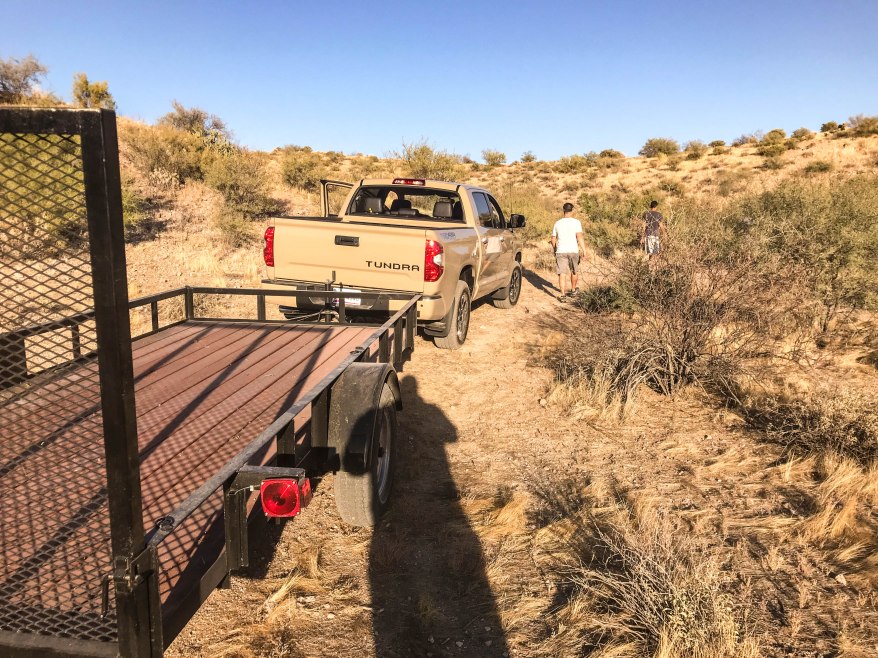 The 5.7-liter iForce V-8 was the sweet little power house here. While the Tundra is running on old-school vibes and chassis from when the first iPhone came out – its 381-horsepower engine and over 400lb-ft of torque managed to glide through the sand like it was dancing on ice. While riding in the back, the guys couldn’t help but fall for the upgraded TRD dual exhaust that beefed up the exhaust note and brought the V-8 to life.

With the Tundra, being the only truck on the market to have a fully sliding rear window, it made it easy to communicate with the guys in the back to control the direction of the trailer. While the interior may have gotten a little dusty its quality materials and finishes took the abuse of us constantly getting in an out. The seats were large and comfortable and with this being the crew cab – there was epic amounts of rear legroom and storage available.

Seeing the razor in our sights, the guys were slightly glee with joy – knowing they’re just a few steps away from getting back to civilization. With some tricky maneuvering, we managed to get the Tundra and the trailer right where we needed to load up this toy. With the ability to tow over 10,000lbs, this was nothing for the Tundra. And watching it maneuver through the rough sand was nearly majestic.

Despite the fact the Tundra is as old as father time, it still holds a certain appreciation. We could have been in the Ford F-150 with its 3.5-liter twin-turbo V-6 or the GMC Sierra with a 6.2-liter V-8 – both able to achieve over 12 mpg while getting to 60 mph faster. But I wasn’t – I was in this truck, on this day, at this time and those guys had never been happier to see me driving down that dirt to lend a helping hand and Toyota may have just walked out of that with a new customer.