The rise of the compact hatch has hit our generation harder than the 80’s fashion industry. We sit back and laugh at the styles and clothing our beloved parents wore, but like modern times, everything has grown up and gotten better of the years. With crossovers seducing Americans like a bad reality tv series, the sedan world is fighting an uphill battle that frankly just can’t compete with the versatility of an SUV. However, crossovers are not cheap, they are more expensive to buy and to run, and therefore, consumers looking for versatility, look at hatchbacks.

Hatchbacks are the new form of affordable roomy crossovers minus the extra height and four-wheel drive capabilities. While some hatches, like the Volkswagen Golf have been around for ages perfecting its glitches, other hatches, like the Hyundai Elantra GT have only been here a mere one generation cycle. We’re here to look at both – to see how far we’ve come and to see how Hyundai’s latest trail of good luck can compete with something that’s been around the block a few times.

Both hatchbacks seen here are of the entry level nature with cloth interiors, roomy back seats, and large touch screen interfaces that both supports Apple CarPlay and Android Auto connectivity. While the Hyundai Elantra GT uses a naturally aspirated four-cylinder over the VW Golf’s turbo-four – they both have an average of 165-horsepower, six-speed automatic transmissions, and a base price around $21,000.

But there’s a problem… in this scenario, a scoring system was put into place to determine the winner of our comparison. The end results were a bit of a surprise when they both tied.

The Golf is the one of the longest running generational hatches on the market, next to the Honda Civic. Both have survived the 80’s and can probably tell you stories about Desert Storm. Volkswagen has always been the popular vote thanks to its German ingenuity and much like the quarterback winning Prom King, the VW will always hold its crown over the peasants. 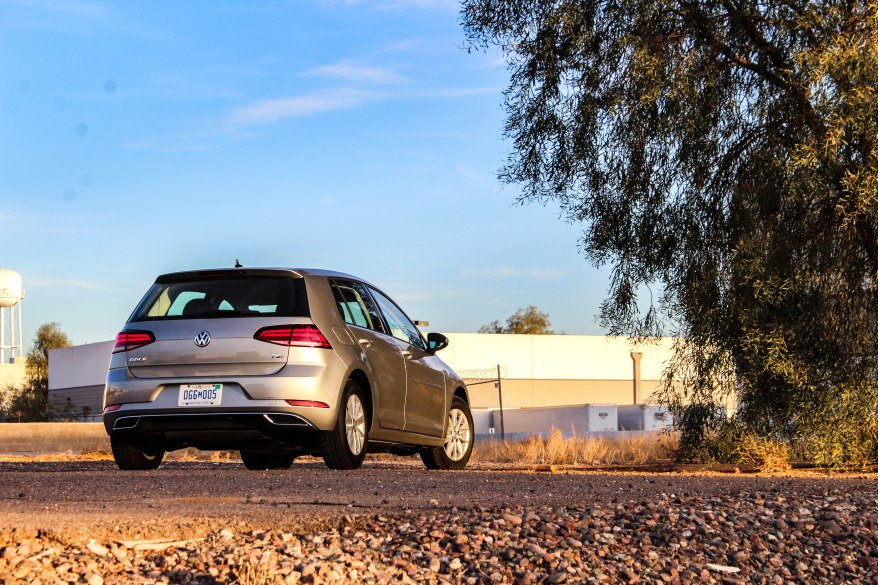 While this Golf may not support its GTI performance capabilities, the Golf has always had a bit of heritage up its chassis, and seen here its nothing new. The 1.8-liter turbo-four puts out a respectable 170-horsepower and performs 0-60 in about seven and half seconds. Its chassis is always up for a good time showing off an unbending conduct of well-welded steel and rigid balance. Steering showcases a light assertiveness with a positive on center feel with a pleasant feedback. It’s a hatch that can be fun to toss around in traffic and with the turbo boost on point, its sparks a slight thrust in its acceleration. The six-speed transmission is a on the engaging side too with crisper response times and steering wheel mounted paddle shifters made the drive slightly more enjoyable. It’s boosted performance also doesn’t impact fuel economy returning 37 mpg on the highway and 28 mpg combined on regular fuel. 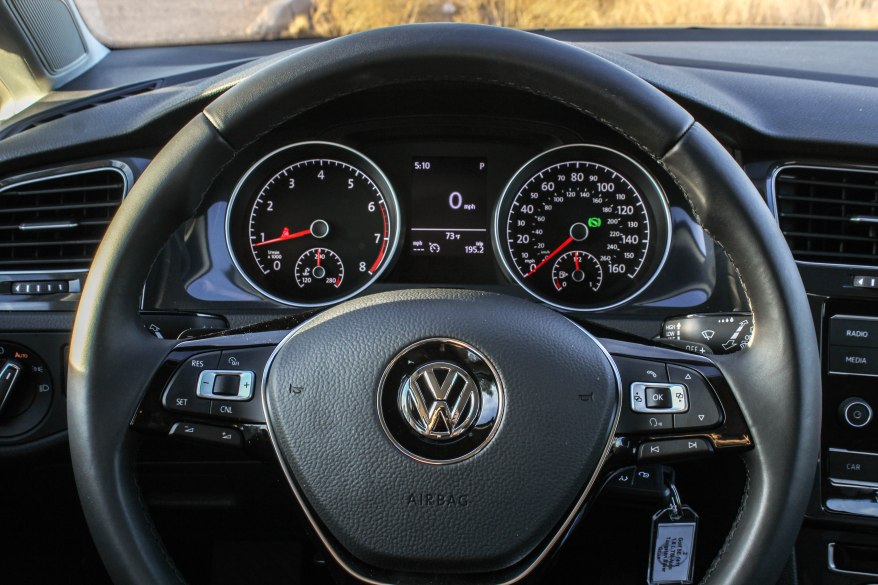 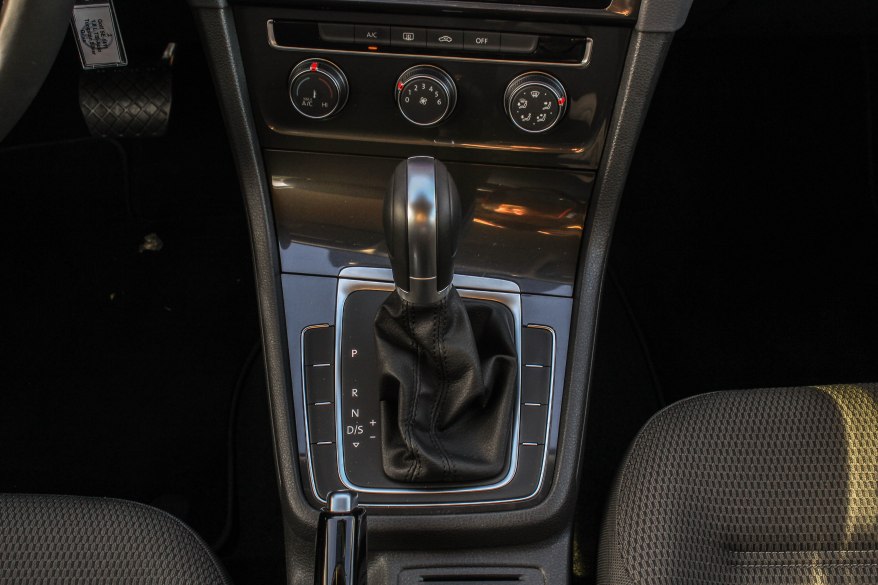 Volkswagen has always been on the conservative side of styling, and the Golf certainly possessed a personality that portrays less excitement than a history teachers lesson plan. Our base model S tester sprung for 16-inch wheels, halogen headlights, and fake exhaust tips in the back. At least for 2018, Volkswagen encouraged a little more style with LED daytime running lights and LED taillights as a standard feature.

The interior is also just as drab, sporting fifty shades of gray from the black cloth seats to the gray, less inspiring dash and center console. Everything is laid in a corporate functional manner that over time may cause one to fall asleep at the wheel. At least now, the Golf features a fairly large touch screen interface with a integrated back-up camera that pops out of the rear VW logo, which is kind of gimmicky and cool. The Golf also features automatic up/down power windows for all-four windows, which is something not all manufacturers do.

The Golf has been with us for far too long to be this dreary. Perhaps VW is losing its touch or other car makers have learned new tricks. Either way, despite its new 6-year powertrain warranty, Volkswagen has to do a lot more than just have a good chassis to compete with the creativity of other car manufacturers.

We already know this is a bit unorthodox, and we’ll probably be accused of being wrong for our assessment. But perhaps we’re a little more bias for the underdog. But let us not forget, this is not a comparison against the more fun to drive GTI and Elantra GT Sport – this is a comparison for the everyday driver who doesn’t care about mountain roads, manual transmissions or responsive steering. Consumers looking at a generic hatch are looking at features, practicality, fuel consumption, and style. 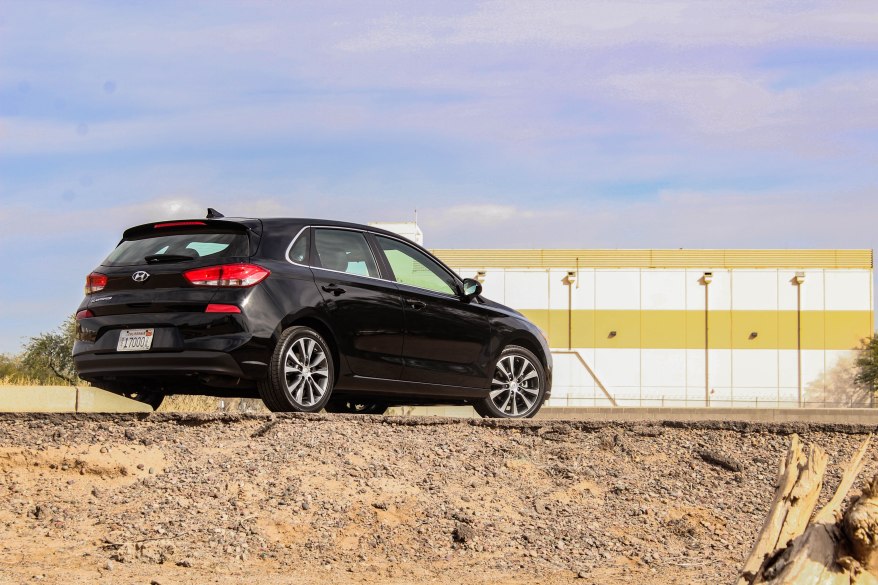 We must confess, the Elantra GT hasn’t actually been through one generation cycle. The GT has been around since the early 2000’s but technically, it wasn’t necessary a true hatchback in the sense of having a large rear trunk capacity and a European flatback tail design – it was more like a sedan back then. The GT finally came into a full hatch for after the latest Elantra design in 2012 when it became a car consumer actually wanted.

Unlike the Golf, the Elantra is geared for more city driving. What it lacks in the thrust department makes up for its quick behavior and ability to provide the driver with confidence to keep up and out accelerator other drivers. With only 161-horsepower from its naturally aspirated four-cylinder engine, the Elantra trailed the Golf to 60 in about 8-seconds. But who’s counting that whole half second difference. In return of our slower more responsible engine over the Elantra GT Sport’s turbocharged 2.0T, the GT returned an average of 28 mpg combined over our 200 mile test. Both the Golf and Elantra GT were right on pare with fuel consumption and range with an average of 450 miles on a single tank. 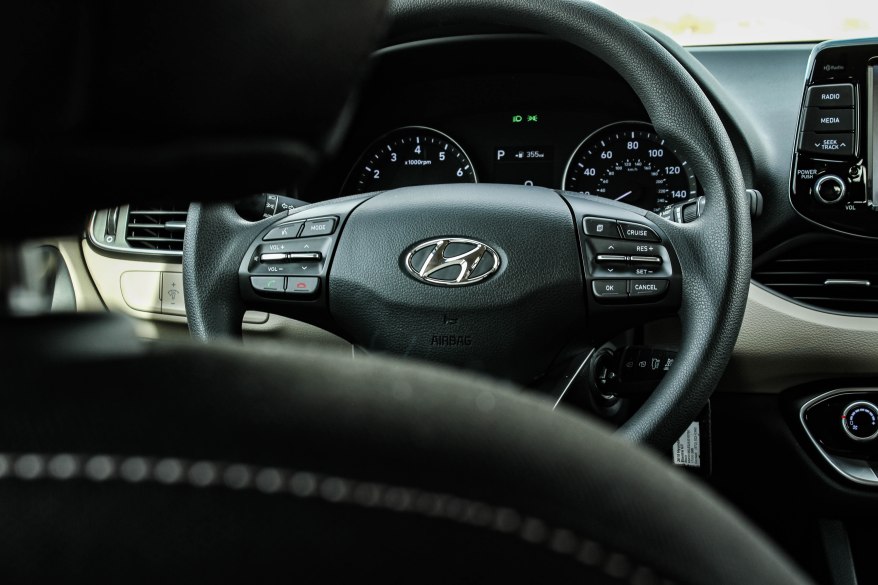 The Elantra GT is definitely growing up and learning how to play with the bull dogs. The newly engineered chassis starts to show up the Golf with just as much positive return on its driving demeanor and steering behavior. The Elantra GT has a little fun to drive run around towner conduct with quick responsive steering and a smooth six-speed transmission, despite its lackadaisical upshifts.  The ride quality is also just on pare with the Golf providing a solid foundation of road awareness without any discomfort or suspension sponginess.

We like the style of the Elantra GT a lot more than the Golf too. While they both feature European styling, the Elantra GT uses larger 17-inch wheels, projection beam headlights and like the Golf, LED daytime running lights. The interior is also well decorated and more enjoyable to look with a mixed color palette and use of stainless steel materials on the steering wheel. However, this is also where the Elantra GT starts to lose our good faith, the quality of the interior does not fit well with the $21k price tag. The interior uses a mixture of hard plastics over soft touch materials. It starts to have the quality of a rental car than a product that someone would want to own over the next decade. The plastic steering wheel is uncomfortable to the touch compared to the Golf’s leather wrapped steering wheel. On the other hand, all the switch gear has a premium, tactile presence and responsiveness to them, and the large 8-inch touch screen display adds the gratification that the buyer didn’t settle for the cheaper model

The scores are the scores. However, while the Golf serves as a better suitor with its German-like qualities and persona, it was at the end of the day we preferred to go home in the Elantra GT.