Nearly a decade ago, hybrids needed to make a statement to society for their ingenuity and impressive fuel economy. Some continue to this epidemic to show society that they’re one of them – as if they already didn’t let us know they’re vegans and on the Keto Diet.

What started out as a quirky hatchback, the Honda Insight no longer needs to show its unique physique to let the world know that it saving the planet one mile at a time. If the new Insight looks like a slightly refreshed version of the Civic, you’re pretty right on track. The Insight is essentially based on the Civic. Sharing similar sheet metal, the same underpinning chassis and interior components, the Insight is just, well, like the Civic – only much more different in every way. 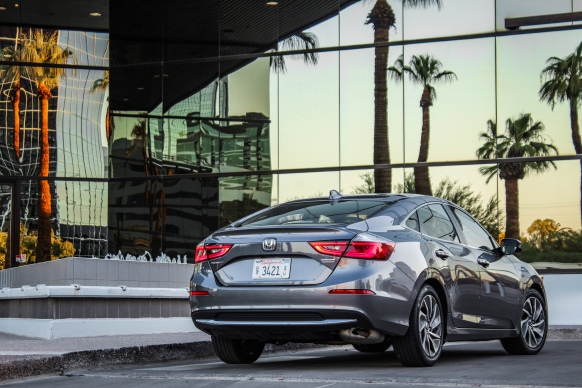 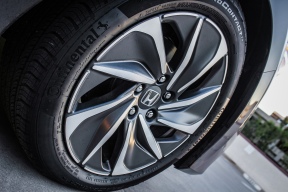 Staring at $22,830 the Insight carries a much more sophisticated approach from its previous eccentric ways. With the choice between the LX, an EX and the Touring – the Insight fits the bill for just about anyone’s budget. In our case we had the top-of-the-line Touring with an all-you-can-eat $28,090 price tag. Upgrading to the Touring may feature some aesthetically pleasing options like larger 17-inch wheels; however, its these options that forfeit the famous 55 mpg fuel numbers that the Insight is more well known to have.

Because the Insight, for all intent purposes is a Civic, it rides and drives like one; upholding an assertive stature. It’s composed of a tight and structured chassis that rides extremely well with smooth serenity, handles with assurance and an untroublesome spirit. Unlike a traditional hybrid, Honda naturally had to geek out and makes things complicated under the hood. Supplied by a 1.5-liter four-cylinder engine, the Insight uses a sophisticated CVT transmission that propels a generator, a generator that supplies power to the hybrid batteries and in which therefore supplies power to an electric motor that powers the front wheels

Our heads are spinning as well. To the average driver however, none of that concerns you. The Insight drives and moves about like a traditional sedan. The source of power is fluid and consistent and the hybrid transitions between electric and gas modes go without notice – partly because we found the engine to be engaged most of the time.  With 197lb-ft of torque being propelled from the electric motor, the Insight swiftly moves to sixty miles per hour in roughly eight seconds. Even though it has been designed for fuel efficiency, the Insight still knows how to pounce when power is called upon – this makes merging onto highways or passing other motorist more appealing and can be confidently achieved without having to sacrifice fuel numbers. Over the course of our week we managed to explore 47 mpg combined city and highway. That’s one less than the EPA. LX and EX models can see upwards to 55 mpg in the city.

Something we don’t see very often in hybrid’s are driving modes. Opting between Sport, Econ or normal will sway the fuel numbers around. Sport however boosts the driving behavior while also charging the hybrid batteries more rapidly. The Touring model features steering wheel paddle shifters; though not in the traditional sense as manage the engine braking for greater resistance. It is claimed that the Insight can travel up to 1 mile on a fully charged battery.

The Touring steps up the Insight to a more first-rate cabin space. With leather material on the seats and dash, it showcases decent use of quality materials and a semi-premium cabin. Both driver and passenger seats are power adjustable with heated seat features, dual-zone climate control system, and touch screen infotainment system with integrated Apple CarPlay and Android Auto. 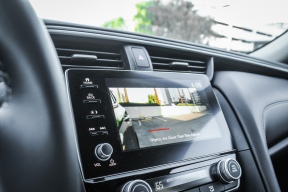 Carrying similar Civic interior traits, cabin space of the Insight is spacious and comfortable. The seats are highly adjustable for a decent amount of support. Rear seats feature pleasant leg and headroom accommodations. And with the hybrid batteries strategically placed, there is a commodious trunk space in the back with folding rear seats.

A decade ago, hybrid technology was about as fashionable as a teacup Chihuahua in a Coach bag. Everyone wanted one. Now they’re advanced pieces of engineering that no longer need to stand out and claim bragging rights. The Honda Insight blends in and keeps to itself; it’s the hybrid we could drive without diesel monster trucks blow smoke up our behinds. It’s the hybrid car we can actually want and enjoy to drive to work while maximizing the size of our wallets.