There is no beating around the bush that the Toyota Avalon is the kind of car that its targeted audience carries a pace maker and an extra set of heart meds in their pill box. So, when Toyota revealed the next generation Avalon with a missing bumper and a few too many angles, blood pressure around the world increased to a shockingly new height.

With the Avalon being the largest sedan out of the Toyota family, it has been engineered on the new TNGA platform that is following every other vehicle in their lineup. Carrying the corporate standard 3.5-liter V-6, power has been impressively increased to 301-horsepower with an eight-speed automatic transmission. Those who seek better fuel economy out of their larger sedan will find that the Avalon continues to be offered in a hybrid form.

Offered in four trims and three hybrid trims, the Avalon starts at a reasonability $35,500 – picking up right where the highest priced Camry tops off. Our featured Touring is the sportiest over the already sporty XSE. The Touring’s higher price of $42,200 showcases a dynamic charisma that the Avalon has never quite seen before. This is definitely no longer an Grandpa Jim’s car.

The Avalon Touring takes the XSE and steps it up a notch. Though the front end is a bit wonky, it is something that gets accustom to over time – afterall we’re in the car most of the time. Wearing a set of 19-inch wheels, the Avalon looks very serious and striking – it carries itself well with a decent balance of aptitude and inimitable essence. It’s here we will find something that we never would ever thought to seize to exist on an Avalon… let alone any Toyota product – its sequential indicators or as they call it Laser-Ablation with Dynamic Auxiliary Turn Signals – yes that just came out of Toyota’s mouth. So, like a Ford Mustang or an Audi, the blinkers chase each other around like kids on a playground – it’s cheesy – but we like it – makes us want to use our indicators more often.

With some tweaks to the V-6, the Avalon has a pretty healthy appetite for speed. Zero to 60 is accomplished in under 6-seconds – considering its weight, that’s pretty spry for an old fly guy. Guess when grandpas got to go to the loo, the Avalon won’t disappoint. The new eight-speed transmission on the other hand carries a Jekyll + Hide personality. On the forefront its calm and seductive. The shifts between gears a barely detected. However, part of the Touring, there are two SPORT modes – SPORT and SPORT PLUS. Engaging SPORT PLUS, the Avalon transform our granddaddy whip into a furious, get out of its way manner. Shifts are much more aggressive and on-point – it knows what gear to be in when we need it to be. And while we laugh at the concept of paddle shifters and a manual shift mode in the Avalon, they’re decently responsive. Then, as we put our foot to the carpet, the sound of the Avalon’s throaty V-6 gets piped through the speakers – it sounds real and made us want to give the Avalon the beans as we set off from the light. 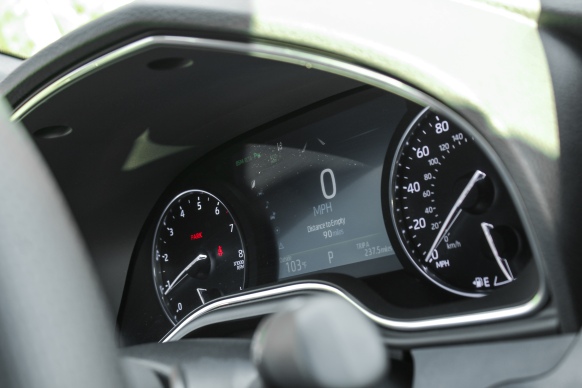 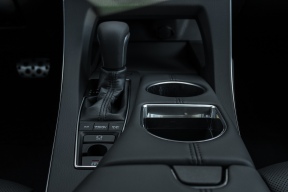 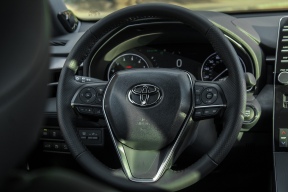 Underneath all that sporty skin, the Avalon’s ride quality is sublime as one would expect. It carries a comfortable cleverness to its driving style that one never would want to drive too aggressively. Yet that SPORT PLUS module seems to still change everything as the Avalon’s Adaptive Variable Suspension System comes in and transform everything to be a wee bit more destructive with a steadier ride quality. This also effects the handling, while normally the steering is cohesive and responsive with a controllable balance of comfort and driving engagement – the other side of that coin follows with heavier steering and crisper responses.

Even with all the Avalon’s extra-curricular activities, it never seems to damper the fuel economy as we hit right on the money when it came the EPA rated MPG’s. Hitting 22 MPG’s in the city and just over 32 MPG’s on the highway, the Avalon return a positive investment on its 400-mile range tank.

Inside the Avalon it’s a much more different place than the previous generation. With a contemporary design element, everything stems from the center stack as it gives a floating core. The large prominent touch screen interface features high-definition crystal clear display with an intuitive interaction and now features integrated Apple CarPlay & Android Auto – a first for Toyota. Everything is laid out in a simplistic manner that easy to understand and control.

While one would find the seats quite comfy, we find the design of them to be exquisite using the simplest touches of suede contrast and orange stitching. The quality of the interior showcases a different element of the Avalon and with our Touring seeing impressionable carbon fiber, chrome trimming, and perforated leather on the steering wheel and shifter – the Avalon is targeting a whole new demographic.

When it comes to all the tech and features, at its $42k price tag, the Avalon is not falling short. Featuring a full color heads-up display, heated and ventilated front seats, heated rear seats, and as part of a $1150 Advance Safety Package, the Avalon gets a unique Bird Eye View Camera with a perimeter scan and sonar detection. As part of the Toyota Safety Sense system, all Avalon’s come standard with Lane Departure Warning with Lane Keep Assist, Forward Collision Emergency Detection with Autonomous Braking, Adaptive Cruise Control and Automatic High Beams.

At the end of it all, the Avalon is, well, an Avalon. When Mercury stopped manufacturing the Gran Marquis, its customers fled to here. As our young selves quite enjoyed the smooth comforts a sporty sedan, its demographic on the other hand may have to find comfort in a different trim.