Living History: Looking at the History on the Toyota Land Cruiser and Lexus LX 570

Dinosaurs do walk among us, or at least drive. The current generational fossilized bones of the Toyota Land Cruiser and Lexus LX 570 have been voyaging all over this earth well into the better part of the decade and while several brands have gone into the modern world of unistructured formalities and upgraded technological advanced off-road abilities, Toyota/Lexus has been keeping true to their roots… for now.

Looking back, long before Lexus was even a thought, the Toyota Land Cruiser was more than just a luxury SUV. Debuting in 1951 to the public just after World War II, the Toyota Land Cruiser has been with us for over 60 years. However, that’s just the name, it’s not exactly when the Land Cruiser first started. During the Second Word War, when Japan invaded the Philippines, the United States at the time had territories off the coast of the Philippines and provided aid to such attack. Defenses by the United States Military used Willys at the time. Seeing how the Americans had such a capable off-roader as their military vehicle, the Japanese needed one to call their own. Taking in the unique specialty of the Willys capabilities, the Japanese Militants “found” one of these Willy’s lying around, sent it back to Japan and commenced Toyota to produce something of similar attributes. In the later part of 1941, Toyota then developed a light—weight truck for the Japan Military and called it the AK10. With an upright front grille, flat front wheel arches, headlights mounted above the wheels arches and a folding windshield, this was Toyota’s answer to the Japanese Military’s request. Reversed engineered from the Willy, the AK10 was powered by a 2.3-liter four-cylinder engine coupled to a three-speed manual transmission and two-speed transfer cage.

The AK10 was considered a prototype till 1950, when the Korean War created a demand for their new found vehicle. Over 100 vehicles were ordered. However, in 1951 modifications were made to the Japanese modified Jeep – increasing the size it was now bigger than the American twin and more powerful with a 3.4-liter six-cylinder four-stroke engine capable of producing 84-horsepower, they then called it the Toyota BJ. By 1953, the Toyota BJ was then starting to be sold to the public. 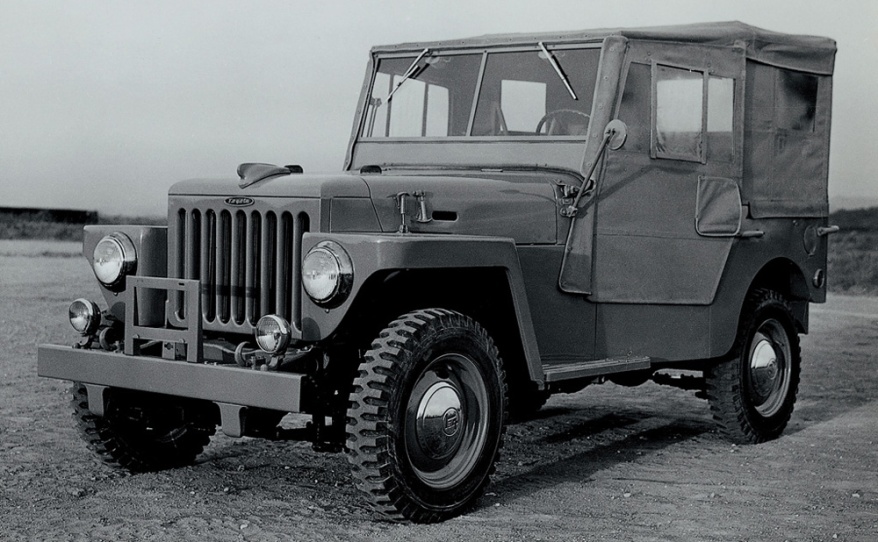 However, in 1954, Willys Company caught wind of what Japan had done and immediately filed a trademark violation. In response, they changed the name to “Land Cruiser.” Not that, that didn’t come with its own set of problems as its neighbors to the east, the British had the Land Rover. By 1955, the second generation of the Land Cruiser was then released, noting as the J20. By 1957 two extra doors were added and became Australia’s most popular imported vehicle.

More famous however the Land Cruiser J40 – designed more for the people by offering more comfort and more performance. By the end of the 60’s, over 100,000 J40’s were sold worldwide. 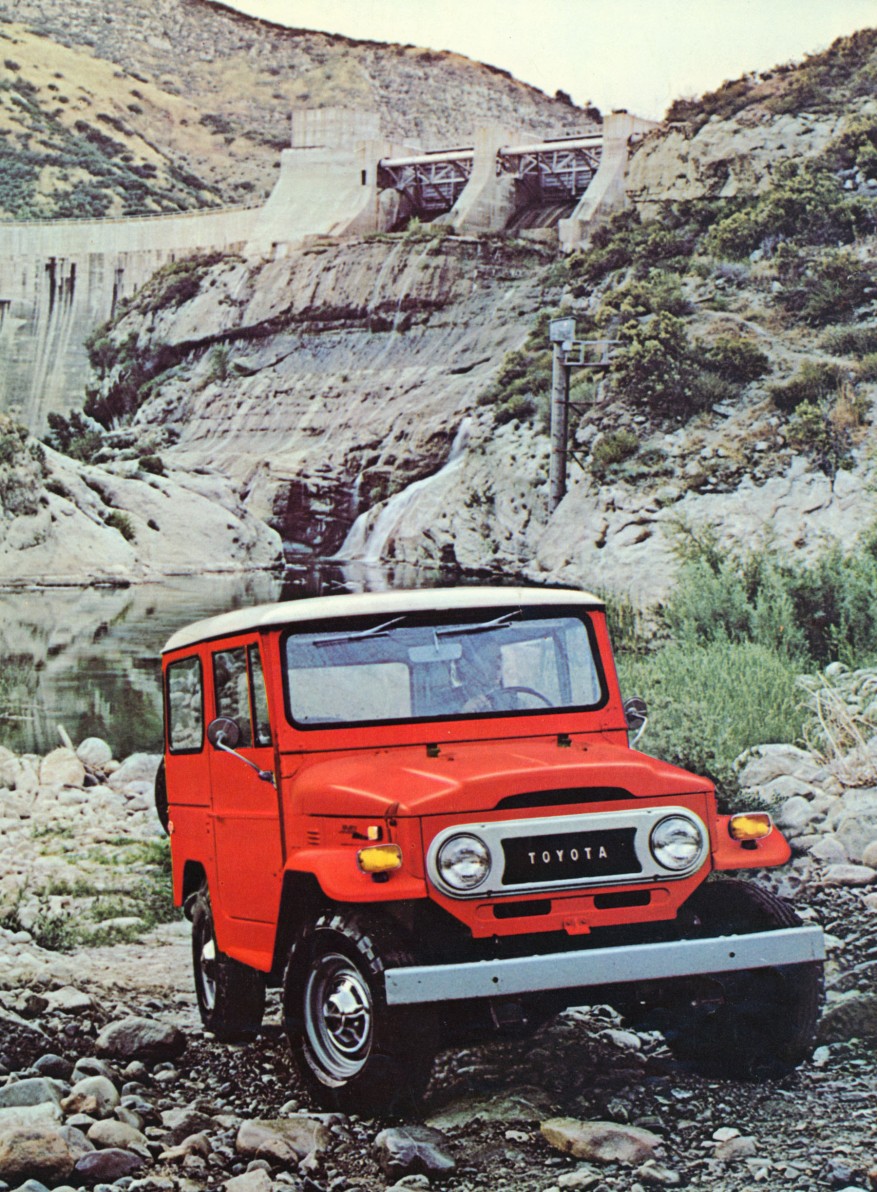 From there the Land Cruisers intent grew – with growing families and the realization for more of a comfy creature vehicle was in demand, the Land Cruisers concept got softened. Perhaps this was the beginning of our SUV craze? It wasn’t till 1990, when the Land Cruiser Series 80 was released offering the luxury lifestyle of a premium off-roader with full-time four-wheel drive and anti-lock brakes. However, with the threatening of US Trade sanctions against the Japanese luxury cars in the early 1990’s, Japan was quick to return with an even more posh all-around go-getter, the Lexus LX 450. Released to the U.S. market in 1996, the Lexus LX 450 was designed for the wealthy household that needed a capable luxury off-road SUV to haul their boat around or make it up the snowed in drive way at their luxurious custom built cabin.

This really wasn’t a surprise. Considering Land Rover was becoming an increasing popular luxury alternative, the Japanese needed something to compete with in this segment. By 1998, both the Toyota Land Cruiser and the Lexus LX 470 was to receive its first naturally aspirated V-8 engine and its Active Height Control system that can lower or raised based on the terrain at hand. Randomly, in 2002, the Toyota Lander Cruiser featured an automotive first, Night View – accentually night vision, using headlight projectors emitting infrared light and a Charge-Coupled Device Camera that captured and reflected radiation and then was processed by a computer and projected onto the windshield.

Looking at these two today, and the Land Cruiser has certainly gone soft from where it was over 60 years ago. Irony shows however; while these two are very much different, they are also very much the same. 2007 was the last generational change for both the Land Cruiser and LX 570 carrying the chassis code J200, and compared to modern times, it shows. Staying true to form, both models are based on a body-on-frame platform – a platform designed for strenuous off-roading. Capable of more flex in the frame and chassis, more aptitudes and more rigid structural integrity, a body-on-frame chassis design is as old as time but just as good as a modern engineered unibody development. 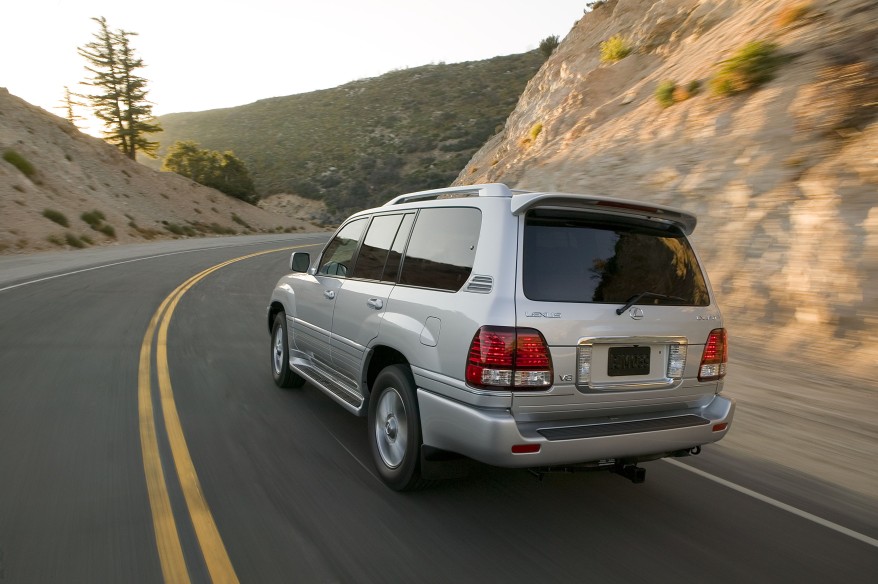 Because of their stature, they both ride and drive like the ultimate tank machine. Weighting over 6,000lbs, they are one of the heaviest SUV’s on the market next to a Chevrolet Suburban and Cadillac Escalade. For 2019 both the Toyota Land Cruiser and the Lexus LX 570 receive minor incentives to stay current in this modern world. Sure, words like Lexus and LX shine out of light when approaching the car and opening the door, a digital clock and Lexus Enform includes smart watch and Amazon Alexa. Is that considered luxury these days? 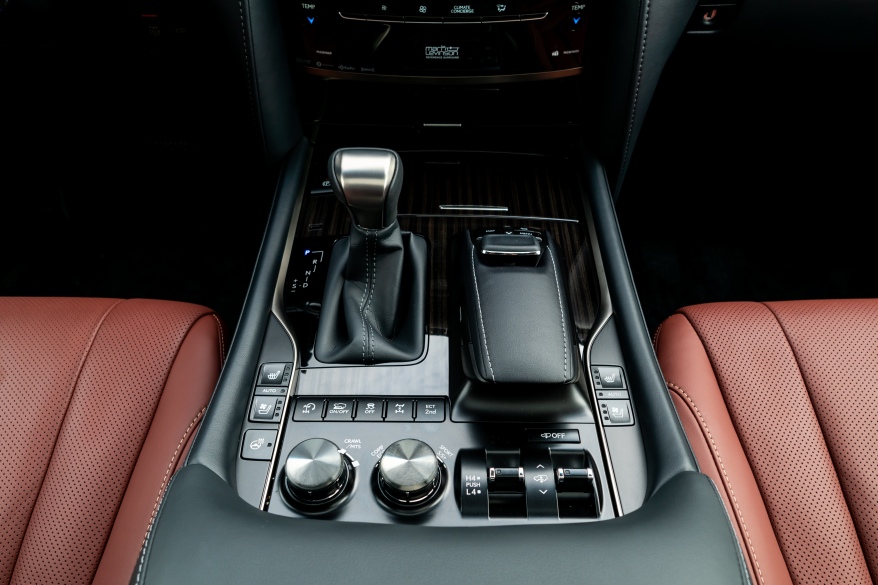 Surprising as much, both are powered by the same 5.7-liter naturally aspirated V-8, the Lexus LX 570 produces 383-horsepower over the Toyota Land Cruisers 381-horsepower. Both are capable of towing 8,100lbs with over 400lb-ft of torque. Minus a two-horsepower difference, the both uphold the same driving mannerisms – feeling like we dominate the road and over power anything that gets in our way. Once the pavement ends and the adventure begins, world domination is just a few switches away. 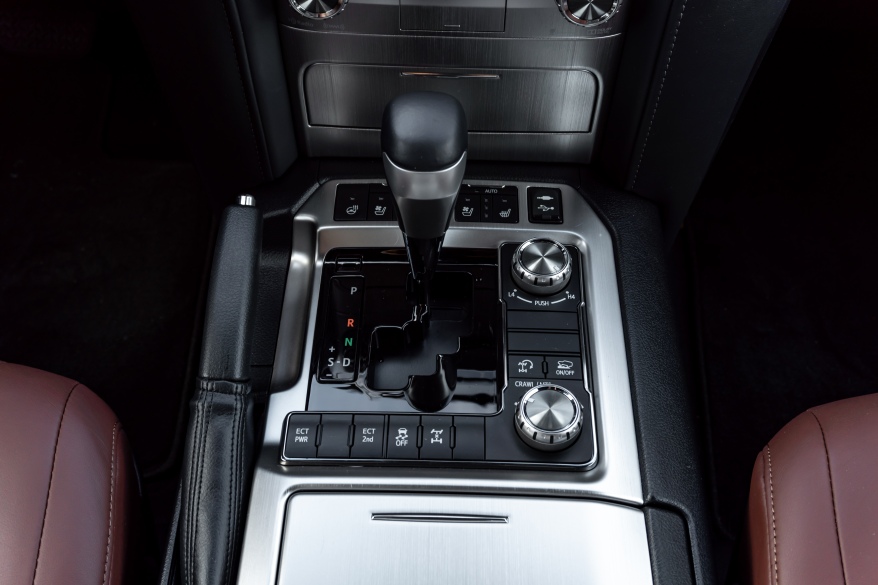 While the Lexus LX 570 carries all the same fundamentals as the Land Cruiser, its posh value earns more credit on the road than off. With 21-inch wheels and road satisfied rubber wrapped around them, the LX 570 struggled with some minor off-road capabilities. Looking down at all the buttons – we think what average house wife will understand how must of those features work. Both the Land Cruiser and LX 570 using intense electronics for off-road driving – from a terrain management system, to crawl-control speed adjustments, crawl-control steering assist, adjustable height management system, locking differentials, transmission gearing control for slippery/snow conditions – it’s almost mind boggling. The Land Cruiser on the other hand with its all-terrain tires and 18-inch wheels was more up for the challenge when we tossed the same terrain that we drove the Lexus LX 570 on. 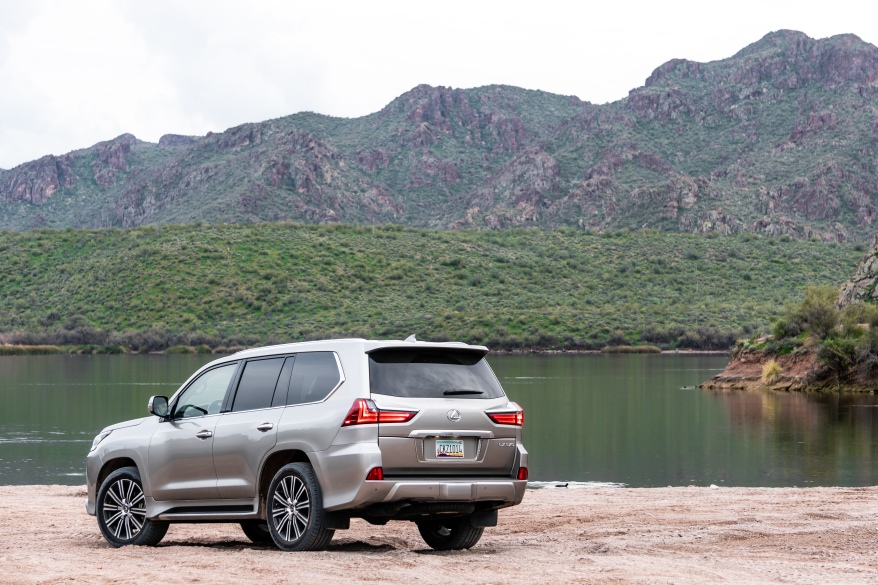 With an $11,000 difference between the two SUV’s the Lexus LX 570 is the more favorable desired vehicle to be in. Costing $99,710 over the Land Cruisers $88,260, the LX 570 carried a more luxury refinement with a brawnier, premium appearance, a more well-mannered interior with leather on every surface, semi-aniline headliner, heated and cooled seats in the rear, dual-pane glass and the overall comfort demeanor fitted more well in its price point. Whereas the Toyota Land Cruiser carried a more budget-friendly aspect with a simpler styling indication, harder plastics on the doors and dash, and low-resolution touch screen infotainment system.

As there are no current talks about the next generation Land Cruiser or LX 570 – these two will be with us for a while presumably. With so much history built behind the name plate, it’s unfortunate that in these modern times, the justification for a near six-figure off-roader is almost unnecessary. Especially considering true off-road passionate enthusiasts will seek closer to the Toyota TRD Pro line-up and those seeking a six-figure price tagged vehicle may be finding themselves in line of British and German engineered ways.

Over time, everything evolves – the Land Cruiser, once a military ops vehicle evolved into a posh luxury crusader. Our needs have changed, it would be nice to see the Land Cruiser revert back to its roots and finally give Jeep some real competition. 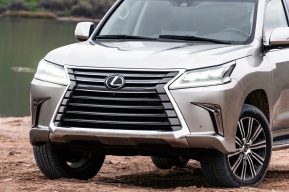 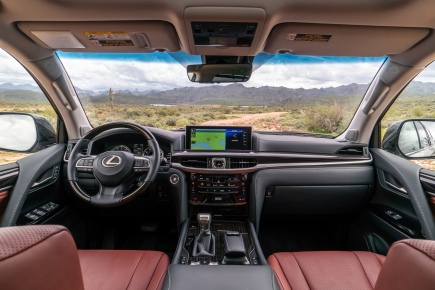 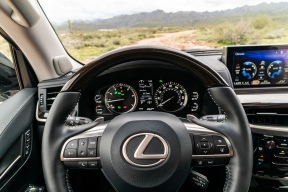 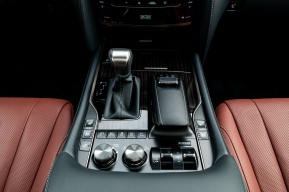 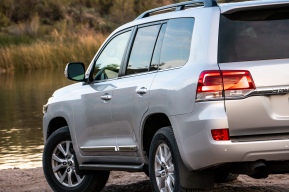 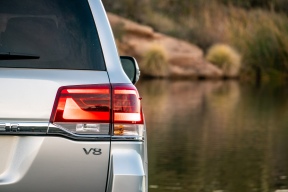 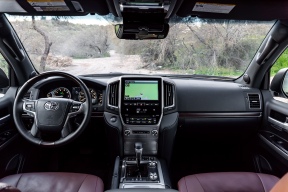 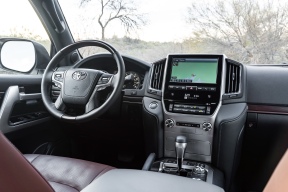 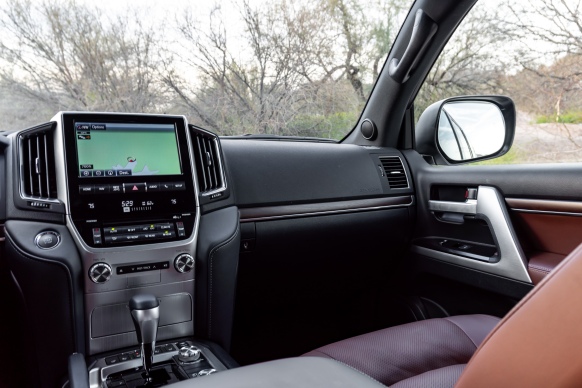 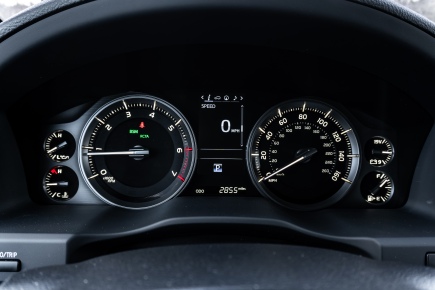 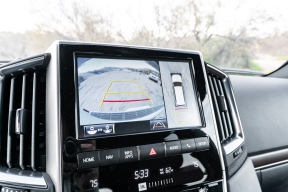