It wasn’t that long ago when Kia first tried their hands at a large three-row crossover. Back when crossovers were merely truck-built utilitarian’s with a body-on frame chassis and a proper four-wheel drive arrangement. The once remembered Kia Borrego with Kia’s first optional V-8 engine lived a very short dismal life of a single year due to the 2008 financial crisis and shockingly high gas prices. Trying their hand again, Kia patiently waited till the time was right, when consumers weren’t so gasoline poor and the demand for “bigger is better” fit the bill. Their patience may have just paid off as their all-new Telluride slides into a fierce competitive segment with value pricing and an impressive list of available equipment.

Kia seems to have a thing for small, picturesque towns, first with the Sor(r)ento, a small Italian town off the coast of Naples. And now we have the Telluride – a small skiing town tucked away in the mountains just north of Durango, Colorado. Keeping the name to U.S. territory makes sense considering the Telluride is home grown and homemade. Designed in Irvine, California and built in West Point, Georgia, there is no doubt this three-row family hauler is sure to fit the American lifestyle.

Being a decade later since Kia’s last large SUV walked U.S. asphalt, the Telluride is by far a breath of fresh air when it comes to the mid-sized crossover segment. Bringing in advanced technology, creative styling, and supreme luxury features, the Telluride steps up the family crossover into something more than just your ordinary people mover and into a world where you want to take your shoes off before crossing the threshold. The styling is quite unique with a bold, elegant sculpted approach – it has an brash presence without feeling superior. Our top trimmed SX featured here conveyed a ‘baller’ eminence as the rims were 20-inches cased in a glossy black finished and the dual-LED headlights appeared to be like jewels that shine brighter than any one-hit wonder 90’s rapper. Are we sure this is a Kia? 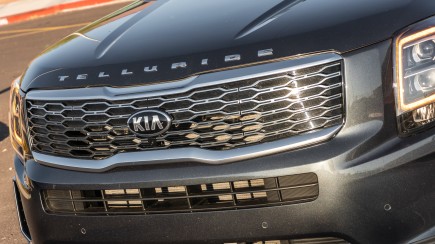 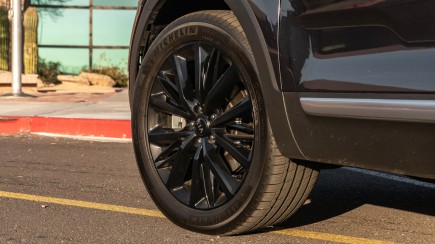 Sharing similar performance to the Genesis G80, the Telluride stems from only one source of power, a 3.8-liter V-6 – coupled to an eight-speed automatic introduces suave smoothness of acceleration. With 0-60 mph seen in about seven seconds, the only slouching we’ll see is from the occupants not picking up their mess. All Telluride models come standard with front-wheel drive and can be optioned up with an available $2000 all-wheel drive system featuring a central locking differential that can evenly distribute torque between axles allowing for surprising capabilities far beyond what any average consumer will use it for. With 8-inches of ground clearance, the off-beaten path can sure look a little more enticing for those that like to explore beyond the paved asphalt.

Like most vehicles on the road, the Telluride uses a source of drive modes to help control the outcome of any given situation with Comfort, Eco, Sport, and Smart – and if it’s equipped with AWD, Snow is an added mode. With comfort relaying most of its driving dynamics, its basis performed a peachy, smooth outcome. With having more gears than cylinders, the eight-speed transmission finds itself confused at times taking a hot second to find its bearings when pedal is called upon. Despite not having a turbo-variant perform as such half its competitors, the Telluride stems from only 262 lb-ft of torque, which is enough to get its nearly 4500lb being and its occupants going where they need to get to. This also returns a 5000lbs towing capacity.

Carrying some minor suspension components from the smaller, mid-sized Sorento, the Telluride delivers a premium ride quality and a level of comfort one would find in a higher priced premium product. Even with 20-inch wheels on our tester, there was the occasional road awareness across major bumps but the chassis supplied rigid body control in the corners. The steering upheld confident composure with decent weight in its motions and reasonable on-center feel that relayed suitable precision one would expect from a large crossover.  Breaking on the Telluride returns a positive outcome as the brake pedal feels firm and stopping performs a linear balance that exceeded our expectations due to its size. 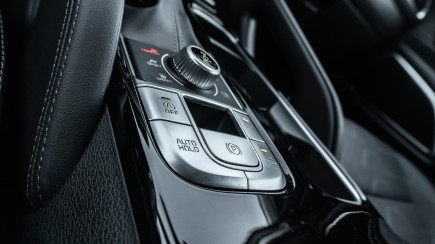 Despite our Telluride not seeing much of the highway during our test, we realize now that perhaps we should have taken advantage of the Eco drive mode during our duration seeing that we averaged just barely over 17 mpg over the course of 200 miles. EPA rates that the Telluride should receive 19 mpg in the city, 24 mpg on the highway and 21 mpg overall combined.

Opening the door to the interior and this is where the magic really transpires. Elevated to a level that portrays an upscale cabin, Kia has fitted a well-executed fit and finish design with driver focused ergonomics and premium materials that could easily make the Telluride mistaken for a $55,000+ crossover. The cabin has been tastefully designed with a matte faux-wood and simulated brushed metal finish that gives it just a little extra pop of fine essence. The top tiered SX features an optional $2000 SX Prestige Package, that has us selecting that check box without hesitation as it comes equipped with superbly comfortable Nappa leather seats with heated and cooled from and rear seats, 2nd row captain’s chairs and a micro-fiber faux suede-like headliner.

Kia has done well by the Telluride with its third-row seating arrangement. Passenger space offers the highest relief and for those that drew the short straw to ride in the way back won’t find themselves disappointed with appropriate ease that accommodates any full-size adult. Access is simple with a push of a button on the second row seat back that slides so far forward it offers a clear, unobstructed path to the third row. While the third row may offer a third seat belt, it would be a snug fit for three bodies; however, the cargo capacity behind the third row out ranks many full size crossovers.

The 10.3-inch touch screen infotainment display represents the SX model as a well-upgraded trim as it spans the center of the dash and carries fluid motions and a sharp graphic display with mobile capable features such as Apple CarPlay & Android Auto. Viewing the 360-degree all-around view camera represents something out of a high-def CGI movie. There is something to say however about the Harman/Kardon sound system as we bump to the beat of our favorite tunes and become the next YouTube car karaoke sensation. Ultimately, when it comes to fighting over who gets to charge their phone next no longer has to be a problem as each row of seats offers two USB ports, that’s six total available USB ports. 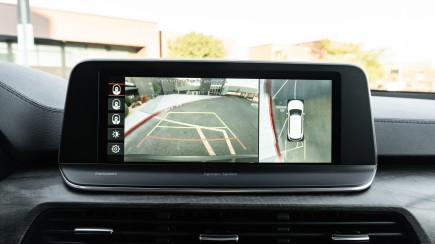 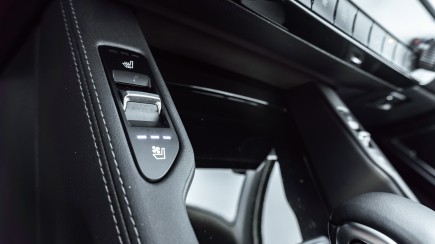 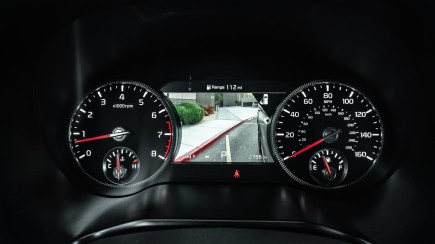 With a long list of safety tech acronyms that follows in the Telluride, two of them were sure to stand out. The newly develop Highway Driving Assist feature (HDA) is exclusively available to the EX and SX trims only. HDA takes adaptive cruise control to a new level of autonomous driving as it has the ability to steer with the guidance of GPS data, a windshield mounted camera and adjust its speed based on the speed limited designated in that area. The other of the bunch BVM represents Blind-spot View Monitor. This feature is only outfitted on the SX variant only and incorporates a live video display of our blind spot in the 7-inch digital instrument cluster once the turn signal has been activated.

An entry-level front-wheel drive Telluride LX starts at $31,690. Our range-topping SX with the SX Prestige Package saw a $46,860 price tag that included some must needed accessories like carpeted floor mats. Compared to other competitors such as the Mazda CX-9 and Toyota Highlander, the Tellurides price hits close to home and sees a more competitive outcome with its long list of available equipment. However, compared to the crossovers that seizes past 50 and even 60-grand, we needless to say don’t need to boost the Telluride’s valued intentions. 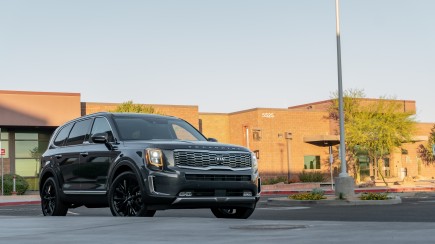 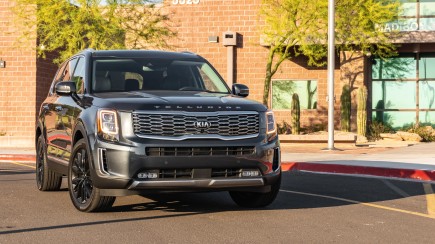 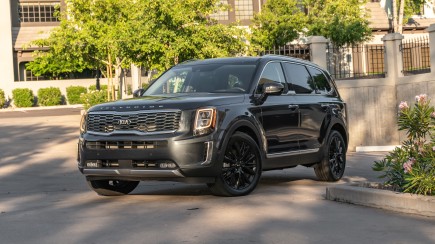 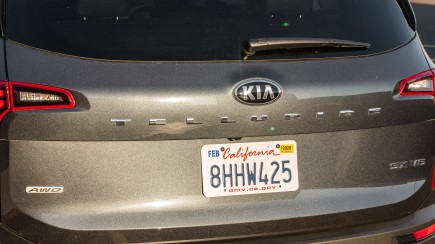 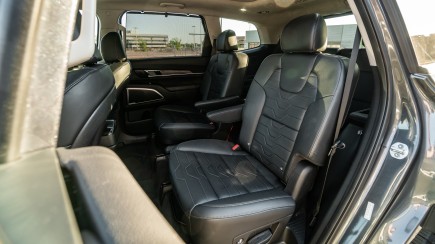 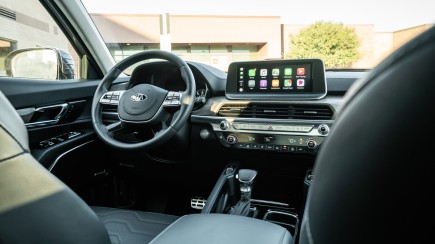 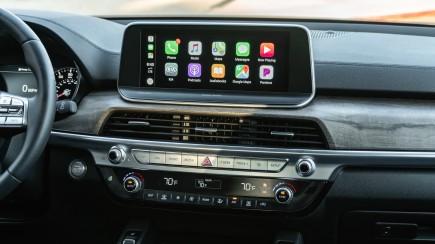 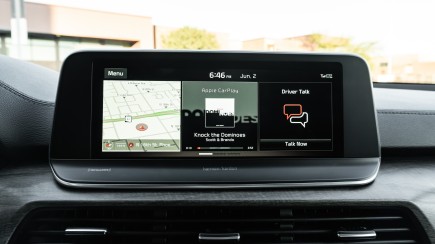 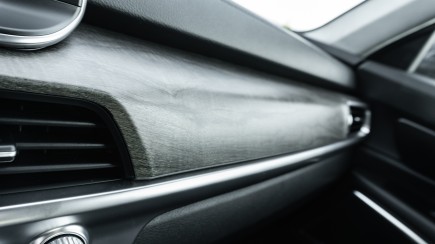