How often do you taken your car to the breaking edge of low fuel? Are you like us, fueling up when the tank reaches the quarter mark? Do you go till the lights come on? Or are you the type of brave soul to extend your chances far beyond the 0-miles to empty warning?

Taking a car to the end of fuel is risky business – how many gallons do you have left – how many miles can you go? And when you’re on a road trip far from civilization with no cell service, suddenly the dawn of silence trying to save as much resource as possible by turning the radio and air condition off just to listen for the very last cough as your car gasps for fluids starts turns into an anxiety session full of paranoia and no Xanax.

Earlier this year we dipped our hand into the Toyota Corolla cookie jar with both the 2019 XSE Hatchback and 2020 XSE Sedan – both splendidly contrived on the bases of becoming something more than just the typical commuting point ‘a’ to point ‘b’ form of transportation. The Corolla has elevated its driving charisma and desirability far beyond what we would have ever expected out of a Corolla. Conversely, along came a different type of Corolla.  For the first time in its 54-year lifespan, Toyota has implemented a hybrid system to the Corolla lineup. Now this may not sound as interesting as one might think… but it is quite interesting to us… and here’s why.

Going against its own kind, the Corolla hybrid uses the same powertrain out of the Toyota Prius. A 1.8-liter four-cylinder engine paired with a pair of electric motors and an 53-kWh battery pack stored under the rear seats. With these two applications collectively working together, the thrilling 121-combined horsepower and 105 lb-ft of torque will leave you gripping the wheel and rocking back n’ forth in the hopes it will go faster. But speed isn’t the name of the game here. Because of this hybrid system, Toyota claims 50-mpg’s in the city and 53-mpg’s on the highway. Now all the major automotive media outlets have proven this fact, so we’re not here to question Toyota on their numbers. Instead, we have something else in mind…

The Toyota Corolla has an 11.2 gallon fuel tank – so if do our math correctly, the Corolla hybrid should get somewhere around 590 miles on a single tank of fuel. Well, there is technically only one way to find out.

With our office located in the heart of Downtown Phoenix, it is exactly 301-miles to Las Vegas, Nevada – roundtrip, that’s 602 miles. So we set ourselves a starting point, a QuikTrip gas station located in Central Phoenix that had nearby freeway access, we topped of the tank, squeezing in a couple extra squirts of fuel and we set our destination for the “Welcome to the Fabulous Las Vegas’ sign – exactly 301 miles.

In order for this challenge to work, we must average at least 55 miles to the gallon – and it’s not like the road ahead is as breezy as one would think. There is no easy access to Las Vegas from Phoenix.  Unlike Phoenix to Los Angles where we have Interstate 10 to help maintain efficiency, getting to Vegas requires several different two-lane highways, small town junctions, and numerous changes in elevations that will damper our fuel economy. This was not going to be easy. But then, it wouldn’t be a challenge, would it.

Being that the Corolla hybrid shares the same TNGA (Toyota New Global Architecture) chassis as the other Corollas in its lineup, there is cleverness to its development. The ride and handling are relatively the same with satisfying on road behavior and a contented ride quality. Because the hybrid uses smaller wheels and 15-inch wheel covers for fuel efficiency, there is a difference in steering behavior as it comes off a little more on the laidback side than one would find in the sportier models.

It comes as no surprising that the hybrid isn’t as quick as one would think – taking over 11-seconds to 60-mph, you’ll never be in a rush to get anywhere. With a trick up its sleeve, the Corolla’s electrified boost at the initial start helps keep things spunky when first setting off. The immediate boost of electric torque moves at a brisk pace around town that enables speedy overtakes. The CVT transmission here maintains smooth, linear composure as power is called upon and there is hardly any notice between gas and electric interchanges.

Avoiding the concept of competing with the Prius, the Corolla hybrid is offered only in the entry-level LE trim for those who want the hybrid technology and fuel economy but without the Prius stature.  Considering pricing starts at $23,100, over $1000 less than the entry-level Prius, the Corolla hybrid is off to a good start. And it isn’t like stepping into the LE is like marching into a base model car anymore. The LE features a host of pleasant features like automatic climate control, 8-inch touch screen infotainment system with Apple CarPlay and Amazon Alexa compatibility, LED headlights and taillights and Toyota’s latest safety hardware, Toyota Safety Sense 2.0 that is standard across all available Corolla’s.

After nearly 200 miles on the road, we were hoping for an adjustment in the trip computer to adjust per our fuel economy figures. As the EPA rates the Corolla at 53-mpg on the highway, we were surpassing that by over 10-mpg’s. We had 110 miles to go before reaching the Las Vegas sign and from a visual stand point, things were looking good. While the trip computer was reading 26-miles less than what we needed to complete the trip, the fuel gauge readout and average mpg had a different story. We still had around ¾ tank of fuel on tap, and if our assessment is right, finishing the trip to Vegas shouldn’t use much more gas. 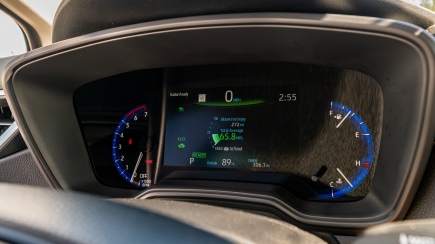 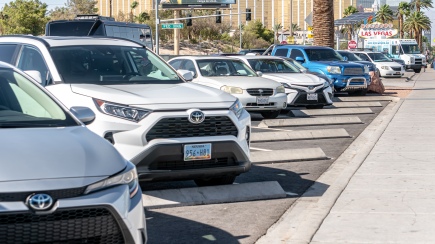 As you can imagine, the tourist traffic in Vegas was a little too rambunctious for our liking and caused us to not have gotten a picture of the Corolla with the Las Vegas sign. However, this Instagram story screen shot will just have to settle has our proof of arrival. We’ve officially driven 306 miles so far and with 272 miles left before we run out of gas, we started to rethink our challenge. The fuel consumption was reading nearly 66 miles to the gallon which had us baffled with disbelief and with the fuel gauge reading just over half a tank, the theory that it took half to get to Vegas, should follow to getting back to Phoenix, right?

Things are looking bleak. Once the fuel light is engaged, it usually represents there is only a couple of gallons left in the tank. Depending on the car, this range could be 40 miles to 80 miles. But once the fuel reaches 0, that’s indication of “hey, stop being a dumb, dumb and get gas” considering there is probably 40 miles left in the tank.  We still had over 80 miles to go before reaching Phoenix, the hills to get back into town we’re not kind on our fuel economy and we were still about 20 miles outside of any town where we could potentially call it quits. 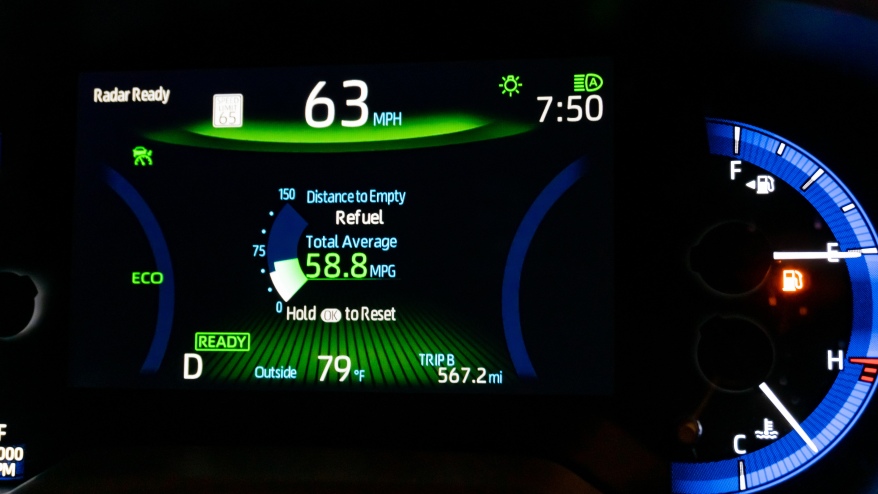 Thanks to the Corolla intuitive engineering, it has the ability to go into electric mode at speeds under 75-mph. Disregard the EV mode button, that button can only be pressed at speeds under 25-mph. By trying to keep the Corolla in EV mode as much as possible, we were able to use regenerative braking and downhills as a way to help charge the battery and give that little push we needed to keep going. At one point, we felt this application was working to our benefit as we traveled about 5-miles with no change to the distance to empty. That soon killed the mood however as the gas engine had to come back online and before we knew it, the read out of DTE stopped reading numbers completely.

Once the fuel reached 0, it stopped reading out an actual figure. We had just passed through Wickenburg, Arizona – about 60 miles from Phoenix. The next town being Carefree was 30 miles away and there were no services between either cities – along with no cellphone service. As the nerves started to rack up – we tried to maintain our anxiety by thinking about the math again. We started to think, perhaps call this quits, stop for gas and don’t be stupid. But the math just didn’t add up. We should still have plenty to get back to Phoenix. So that’s what we did – we continued forward. 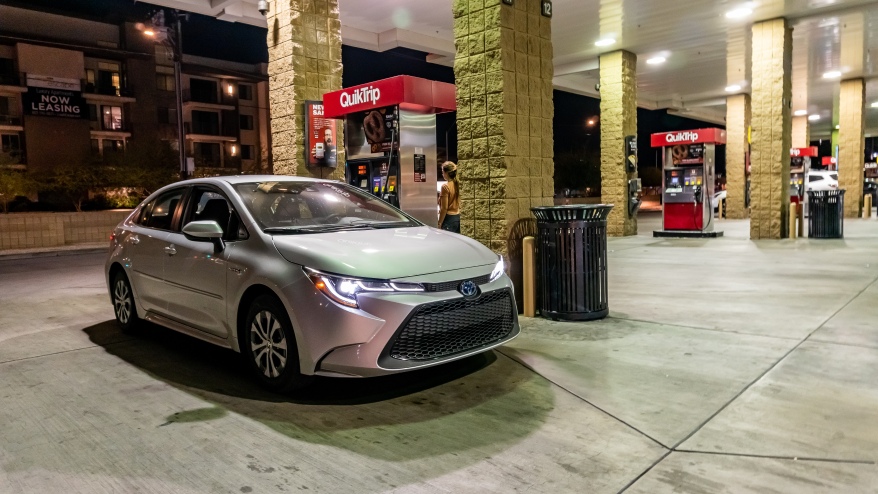 As we pull into the QuikTrip that we originally started at, there was a silent celebration. We couldn’t believe we just drove 80 miles on empty. But that’s not all. When we fueled up, there was still another gallon of gas to go. We still had about 60 more miles in the tank. That’s 140 miles on an empty. 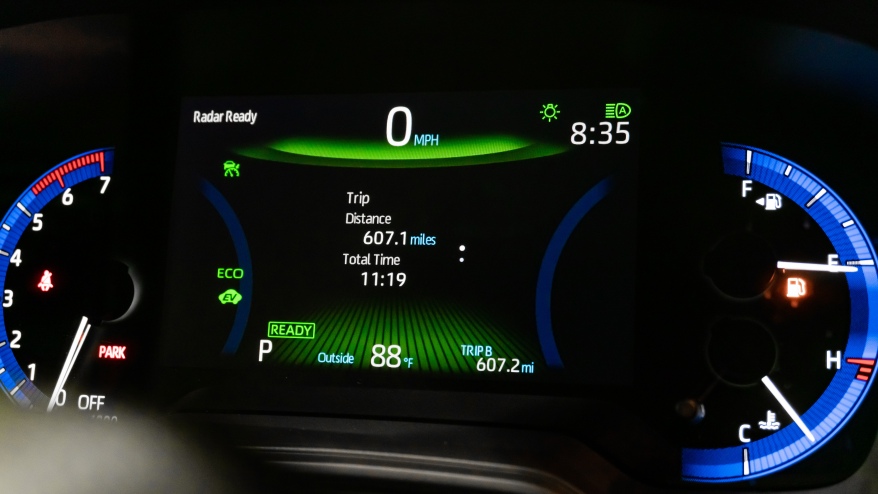 After averaging 59.8 miles to the gallon, the Toyota Corolla Hybrid managed to drive 607.2 miles on a single tank of gas. That is some pretty astonishing engineering. 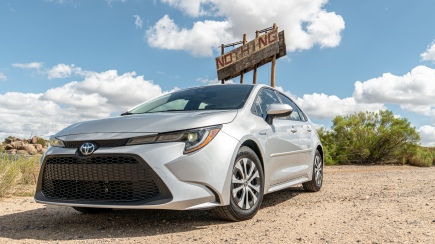 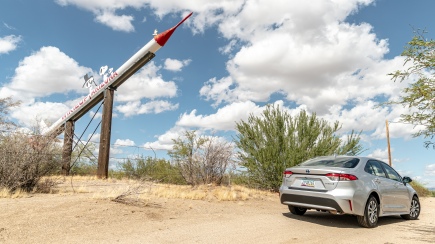 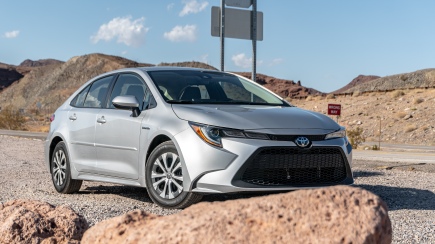 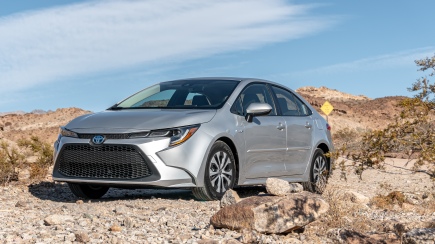 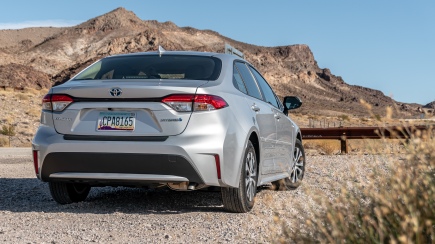 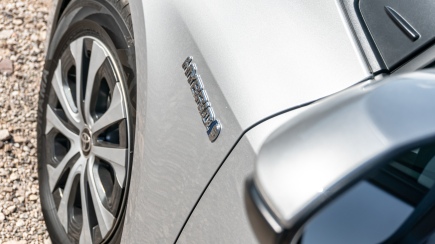 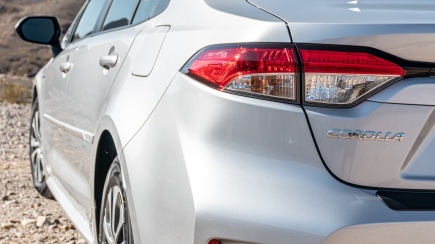 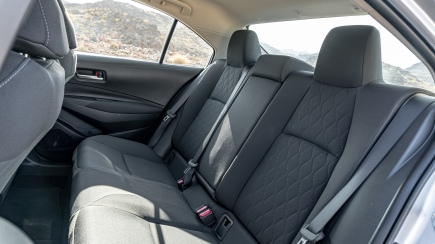 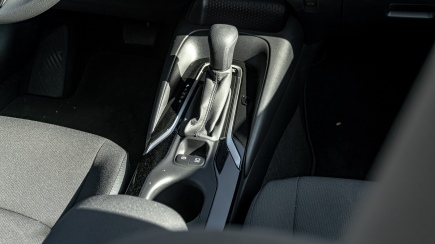 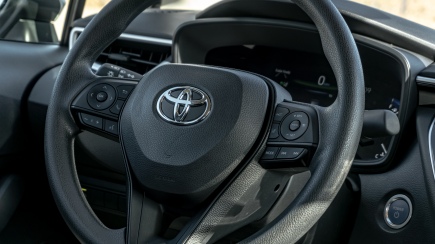 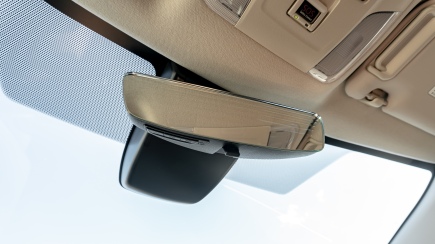 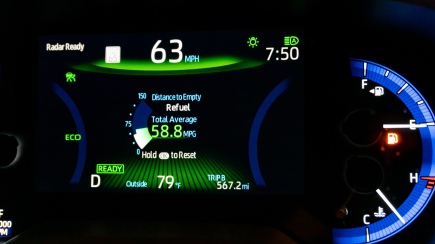 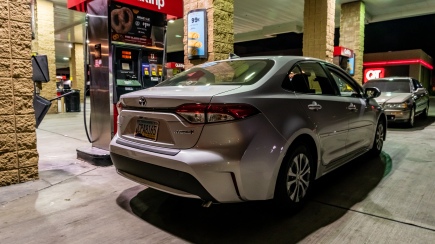 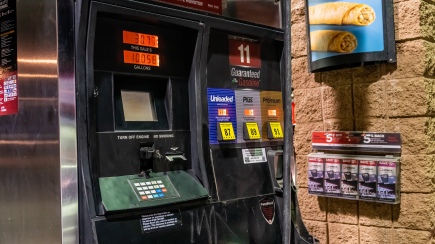