Withstanding the test of time, the Tacoma laughs at the idea of an apocalyptic event. Being one of the few trucks that can outlive its consumer, what better version then to be in than a TRD Pro?

It has been 4 years since we’ve seen Toyota pounce their new Tacoma around in the sand, showing off its advance off-road technology and comfortable lifestyle features. Since then, it has been a quiet ghost town with some minor tweaks here, some safety features there and a steady stream of sales figures accruing. Even after when the TRD Pro returned in 2017, it’s off road extras gave the community something to be excited about it, but that excitement was short lived. Now that enough time has passed, Toyota has released some significant changes that not only boosts its curb appeal, but its comfort levels as well. With every trim, including the entry level SR receiving some sort of upgrade, more tech and more convenience has been added. One of the biggest complaints has been towards the driver side only passage entry, while the passenger side was left to the demise of pulling out the key fob to unlock the doors – oh the humanity – nonetheless annoying. That’s been fixed. There’s also a new 7-inch touch screen infotainment system that encompasses Apple CarPlay, Android Auto, and Amazon Alexa compatibility. With new wheel designs, front grille updates, and optional LED headlights, the Tacoma is starting to finally fit into the modernized world of fashion and premium pizzazz.

Naturally being at the top of the food chain, the TRD Pro receives the most dramatic of updates. Featuring a new 16-inch wheel design, each wheel is 4-lbs lighter than before – in addition, the TRD FOX 2.5 internal bypass shocks have been re-tuned for a much smoother, controllable ride. On the off beaten path, the suspension courses over the uneven surfaces like butter sustaining a more lively driving experience. With these suspension updates and improvements to the handling, there is a noticeable difference in responsiveness and superior body control. Driving down a dirt road at a higher rate of speed provides an elevated confident feel of control. 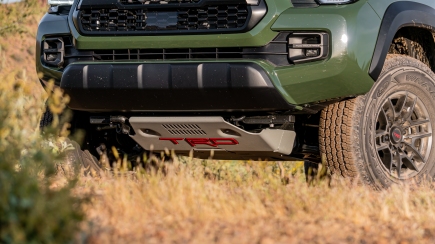 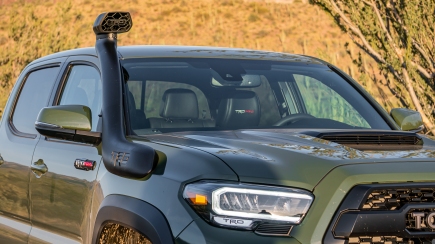 Seeing improved ride quality, Toyota also revamped the interior comfort level in the TRD Pro as well by providing a power adjustable driver seat, a larger 8-inch touch screen infotainment system with actual buttons, an upgraded audio system and a new 360-degree all-around view camera system. Most of these features are available options on other trim levels while the Limited and TRD Pro come standard with surround view camera – working in conjunction with its off-road multi-terrain assist, once four wheel-low is engaged, the camera system becomes activated giving a better view for improved assurance in articulation.

Exclusive to the TRD Pro series, its new Army Green color is quite the highlight – its unique flare catches many wondering eyes that follow with some sort of compliment. With the optional $725 Desert Air Intake, it heightens the ruggedness of the Tacoma’s stature; however, while not very attractive it is quite functional improving the air quality in which it breathes – we’d hate for it to catch Valley Fever.

When it comes to performance however, much of its ability has stayed the same. With a 9.4-inch ground clearance, and 35-degree approach angle and 42-degree departure angle, it virtually can crawl over any rough terrain element. Featuring the multi-terrain select, opting for the best scenario of Loose Rock, Sand & Mud, Rock & Dirt and Mogul modes, the traction control system deviates out its power where it best sees fit to each wheel depending on available traction. Its 3.5-liter V-6 ways is the heart and soul of the beast – despite not being exactly quick on its feet with 0-60-mph in about 8-seconds, its course nature of 278-horsepower and 265 lb-ft of torque keeps it moving through any environment. The TRD Pro at least offers an available six-speed manual transmission but for those that enjoy the solitude, peace of mind, the smooth findings of the six-speed automatic is a near $3000 option.

Following all these updates, the TRD Pro sees about a $3500 price increase from 2019. However seeing that it has finally caught up to this modern period that boosts technology and ride quality, it’s a justified increase.