As consumer’s glam towards the idea of an affordable crossover, there are still a few manufactures out there that have yet to hop onto the sub-ute crossover bandwagon – Volkswagen […]

The life behind a crossover can be fairly boring; designed to be a multi-tasker by hauling screaming toddlers while transporting a delicate volcano science project after running late for a […]

Years ago, long before SUV’s had an extension for the growing family, the two-row life seemed to be just enough. We saw it with the Ford Explorer, Nissan Pathfinder, the […] 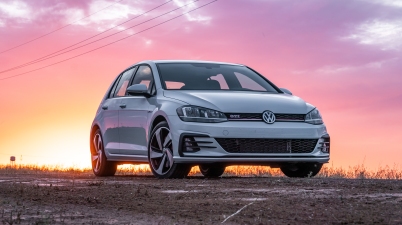 Like an old pair of our favorite blue jeans, the Golf GTI is this gentle sanctuary of untainted idyllic entertainment. Hugging the curves, feeling the crisp sensation of the steering […]

It has been 8-years since Volkswagen has done any dramatic updates to their mid-sized, Passat. Since its debut in 2011 several of its competitors including the Hyundai Sonata, Honda Accord, […]

It’s becoming a sad reality that crossovers are flattering the consumer more and more as it becomes the preferred choice of vehicle to haul ourselves around town in. It wasn’t […]

The Volkswagen Golf is one of the longest running compact hatchbacks on the road having starting life in the early seventies. Next to the Honda Civic hatchback, it has been […]

Road Trip to Seven Magic Mountains with the 2019 Volkswagen Tiguan

Officially being a year into production, Volkswagen’s smallest crossover is trucking along well within its segment. There has been  a lot going at Volkswagen Corporate with the new Jetta GLI, […]

As crossovers continue to take over here in the U-S of A, its companies like Volkswagen that carry no shame in the wagonism concept. The Golf SportWagen makes a continuance […]

Being at the top of the Hot Hatch food chain is no easy task. With the new Hyundai Veloster N and Kia announcing the new Forte GT hatchback – Volkswagen […]