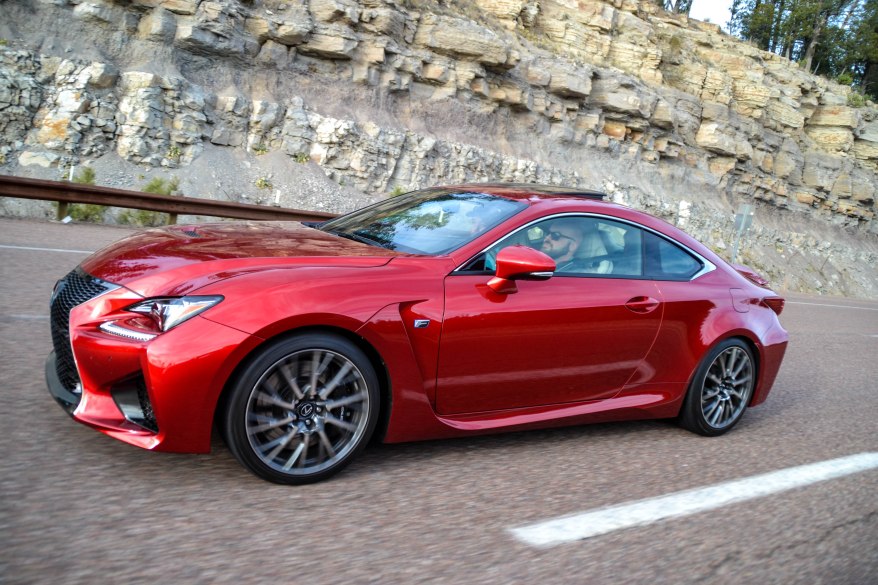 Like something out of the Frankenstein’s laboratory the new 2015 Lexus RC-F is a cryptic creature made from abandoned leftovers discovered in the Lost and Found bin from Lexus’ parts department. Sure, when reading what Lexus did to the RC-F, it sounds like a back page ad for discounted botch plastic surgery – but like all mad scientists, there’s a method to their lunacy.

Generally, yes, in the case of the sports coupe, it is customary to take the family friendly four door sedan, shave two doors, and make the back seat unbearable. However, with the RC-F, the front was taken out of the GS350 Sedan for extra track width which enhances handling, the rear was taken out of the current IS Sedan to keep things snug (gotta still keep the back seat uncomfortable), and the center was taken from the previous generation IS Convertible for its extra strength. Glued together with some impressive laser crew welding, the RC-F is stronger and more rigid than the previous IS-F Sedan in which the RC-F is due to replace.

About to be the cool guy in the office, the keys to our sampled badass Infrared RC-F was oozing with computer generated curves and abstract lines – like something out of a PlayStation game. When it comes to the being the hardcore F ragger, every line is designed to send air around the car which makes for a stunning piece of modern art. Because of its rigid architecture – it makes for a love/hate scheme – since it’s our review, our opinion is the only one that matters and we say it looks eccentric! 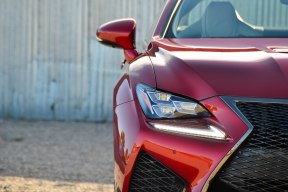 With its red paint already looking for trouble from the fuzz – our exquisite optioned 19” hand polished 20-spoke forged wheels truly makes the RC-F stand out from the crowd. Add the striking good-looking Triple-Beam LED headlights and Lexus’ new generation switch back LED daytime running, along with its large and in-charge black spindle grille, the RC-F can stare down a lion in the face of a territorial battle and send his bags packin.

According to Lexus, the RC-F has its own thing going for it. However, most journalists and automotive enthusiast won’t be fooled that its target is the new BMW M4 and Audi’s RS5 (which is starting to become sooo two years ago). Even though the RC-F holds the same 5.0-liter V8 from the previous IS-F Sedan, Lexus managed to squeeze out 51 more horsepower for a total of 467 by doing more than just a microchip swap out. How they did it is very technical, complicated and too involved for our tiny little brains… to explain on simpler level, they exchanged out all 32 valves to Titanium and used a lighter, stronger crankshaft. By doing this, it also allowed the mad scientists at Lexus to up the rpm redline from 6800 to 7300 for that extra boost of umph.

With 389lb-ft of torque allocated to the rear wheels, the RC F is let down by one thing – its weight. Tipping the scales just over 4,000lbs, the RC-F is just three tenths of a second faster to 60 mph than the IS-F Sedan at 4.4 seconds and continues strong to its limited 171 mph top speed through an exceptional, receptive eight-speed automatic. But now don’t go thinking Lexus has lost its hooliganism once found in the IS-F, you can still wake up neighbors at 2 o’ clock in the morning as the quad chrome exhaust gurgles an intoxicating uproar when you lay into the go pedal and the intake flaps open up at 3,700rpms.

After its lavish recovery period in the lab, the RC-F starts to show the world what it can really do. Adding the stiff structure from the IS Convertible makes for a rigid, stiffer chassis. This of course shows in its ride quality – on smooth surfaces the RC-F is as smooth as a typical Lexus should be, right up to the moment your co-passengers tries and takes a selfie and all 10 pictures came out blurry. 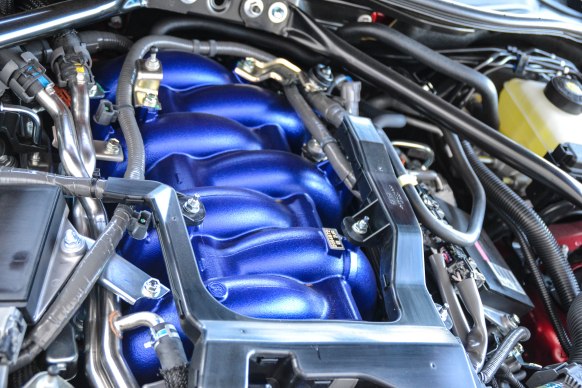 Unless you’re a track junkie, the likely hood of pushing the RC-F to its limits is almost never. So it’s good to know that Lexus set up the RC-F to fit any driving style – no matter how hard you drive, the car in the end works everything out, as long as you leave the safety features engaged (I know, where’s the fun in that). But believe me, even with the safety features engaged, the RC-F can easily slide around corner.

Developed with four drive modes, the steering comes off responsive and eager, gives a good sense for the road. But you don’t really get the sense you’re driving a sports car, even under the ultimate Sport + mode – the steering feels heavy and tight giving a false sense of reality. You really have to push the RC-F to its limits to find that balance in the steering, which if you don’t know what you’re doing, it could lead to an embarrassing, costly experience. But thanks to the rather large 15-inch front rotors and 13.6-inch rear rotor Brembo brakes, stopping is immensely quick, just in case you really don’t know what you’re doing.

Sheltered in your own little world, the RC-F’s interior is lavished in luxury. The F-Sport Trimmed White Leather Seats is undeniably divine in its design that snuggles you as you near 1g cornering speeds. The interior is of similarity to the current IS Sedan – which we liked. The contemporary design keeps you cocooned without feeling claustrophobic using a tremendous consumption of carbon fiber and suede trim. Being that of a Lexus, you can expect supreme comfort – the power adjustable heated/ventilated front seats are sublime. As expected the rear seats are a laugh – if you can convince the front passenger to scoot a few inches forward, they are relatively comfortable with a deep setting and decent thigh support – you will be scrapping the roof line if you’re taller than a fifth grader.

Now bear with us as our nerdy side shows through, one of the best features to the RC-F is its LFA inspired gauges. With a digital TFT display in the middle, it changes different demonstrations pending what drive you decide to choose. Scoot to the left, and that digital display assigns everything a sport car needs; G-Force Meter, Lap Times, and how inefficient your fuel consumption is. Naturally our RC-F features Lexus’ Navigation with Lexus Enform. While we find there system to be one of the best in the business next to Audi’s MMI, the new touch pad interface is not to our liking – it takes a lot of work to shuffle through the buttons and because its ultra-sensitive, we find ourselves constantly fighting with it and distracting.

With a large V8 nestled under its hood, the RC-F is no fuel sipper – EPA rates the RC-F 16/25/19 (city/highway/combined). During our week we couldn’t help but have a little fun which showed in its fuel consumption averaging of 14 mpg around town and 17 mpg on the highway. Drinking Premium Grade fuel like its Gatorade, the RC-F will barely take you 300 miles before it needs another dose of go juice.

Let’s face the cold hard facts, a face like this doesn’t come cheap – and hitting the 75-grand mark is going to be a little hard to explain to the wife. Starting at $62,400, the RC-F is $950 cheaper than the old IS-F Sedan; but if you want the pretty face, the pretty wheels, and all the gadgets… then prepare to spend a lot more. Our tester featured the 19” Hand Polished 20-spoke Forge Wheels ($1,500), Leather Trimmed Seats ($800), Navigation with Mark Levinson Sound System ($2,840), that Special Infrared paint ($595), Premium Package (Heated/Ventilated Seats, Blind Spot Monitoring, Triple Beam LED Headlights, and a few more gizmos ($4,400)), and a Moonroof ($1,100).

To go for the RC-F, you have to throw logic to the wind. The BMW M4 is lighter, faster, and probably more superior to drive. However, at the end of the day, it’s just another popped-up collar bro-mobile driven by someone who wears too much cologne. The Lexus RC-F is brash, outlandish, and perhaps a little idiotic – and that’s why we like it… and the fact it’s one hell of a ride.

I would like to extend a special thanks to local Automotive Blogger Tyson Hugie and friends with Drive to Five for the epic road adventure around Northeastern Arizona. Visit his blog at drivetofive.wordpress.com to find out more on our voyage and other hidden treasures around Arizona.