Where’d we go? More like, what did we do!

We took this weeks test vehicle and put it to good use to help a friend make a music video in Tempe!

Another clever day in the ADOT office

Another clever day in the ADOT office

Minivans are quite possibly the only vehicle that can do just about anything but climb the Rocky Mountains. They’re multi-purposed built to handle even the most bizarre and unique situations – for example, what we had in store for the 2016 Kia Sedona.

Now you see, we already reviewed a Kia Sedona back in 2015… and nothing has really changed  between the two model years, outside the new $1095 optional rear seat DVD entertainment system and the fact that our sampler here is in Snow White Pearl. So instead of doing yet another review on the same car, we decided to use the Sedona in a more productive manner – use it as a camera chase vehicle. However, we still need to talk about the basics.

My friend Tyson is somewhat of an Acura icon… he’ll never admit it, but he’s an Acura celebrity amongst the Legend Forums – after all his most infamous Legend has 542,000 miles and was honored by Acura Corporation. So we teamed up to do a tribute video of his 500k mile Legend Coupe and for all the Legend Fans out there. 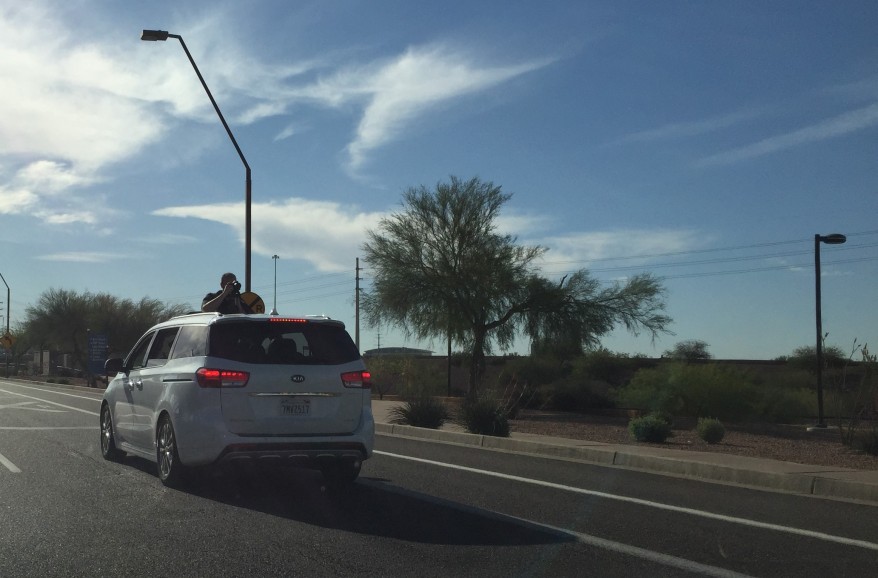 The Sedona was surprisingly a very fitting vehicle for the job and was up for the task. Its 3.3-liter 276-horsepower V-6 engine was dignified and ample in its acceleration allowing us to make quick maneuvers and passing shots in our video. When we needed some quick acceleration, the six-speed transmission did its job effortlessly. And then there’s the ride which is always set up for comfort. With the smooth suspension system, it made for steady camera maneuverability and the ultra-plush comfort when we were just cruising around town looking for the next best scene. And that was even riding on large 19-inch chrome wheels featured on our top tier SXL model.

We had a total of 4 members – which isn’t exactly a professional crew – but do bear in mind, usually I just have myself to shoot some of the videos I do. Occasionally I do have a friend that joins to help out. But the Sedona’s interior luxury allowed for us to comfortably drive around town and not get on each other’s nerves. As part of the SXL brought in the second row premium seats that are just like private first class with big comfy head rests and an ottoman. When we didn’t use the third row, it folded flat into the floor giving us a level area for our camera’s mounting equipment.

Say what you will about minivans, but this Sedona is a good looker… even in this plain white paint. It gives the presence of a larger crossover, which some might adore. And this SXL upgrades the overall appearance with prettier, larger wheels, a more ascetically pleasing front fascia, as well and some unique LED taillights.

At $39,900 our top-of-the-line Sedona was the cream of the crop when it comes to minivan territory. I mean we have the comforts of Nappa Leather Interior which is the best kind of leather money can buy. This premium interior design with soft touch materials and a gorgeous dark wood design was sensational. And an SXL Technology package that brings in Xenon HID Headlights, Lane Departure Warning, Surround View Monitor, and Smart Cruise Control. That of course is a $2800 package – but it’s a package worth the investment. 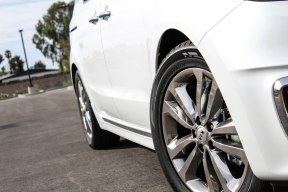 Of course hauling a team of people around town and using its promiscuous V-6 engine to our advantage does damper the fuel efficiency; however, we managed to still see better numbers than the EPA 17/22/19 (city/highway/combined). We averaged just shy of 22 mpg’s in the city if was good amount of 450 miles of asphalt to cover.

Minivans used to have this stigma of bad drivers and a soccer mom attitude – but now they can be almost more luxurious than some premium cars on the market. And in today’s world they’ve become the most versatile form of transportation. The Sedona has certainly entered a playing field that’s making every automaker bring their ‘A’ game!

But after a fun day of driving around town and filming – this is the end result: