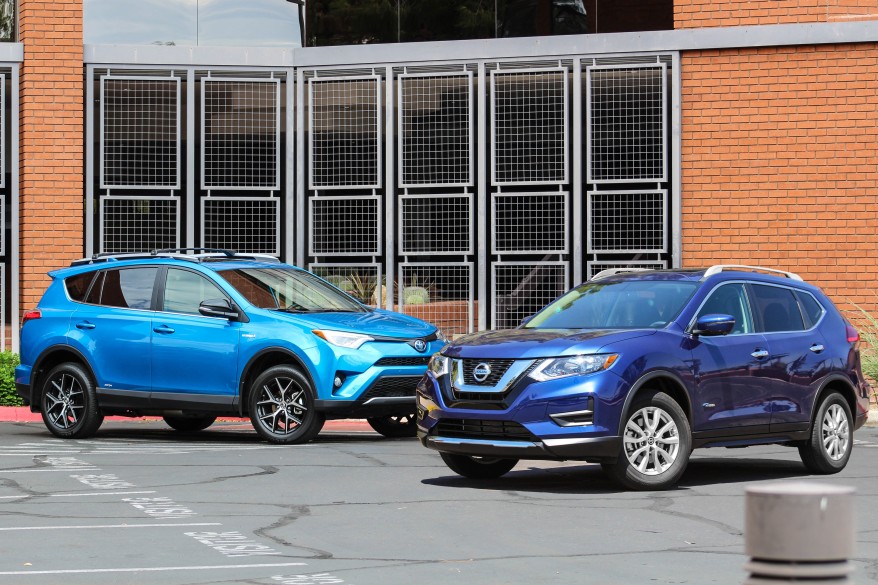 When hybrid technology first was introduced to the market, it was a bizarre, intriguing concept that found its way into a car that was not designed like any other car on the market. And when the fuel crisis hit back in 2007 with soring gas prices, consumers resorted to this hybrid vehicle to save as many dollars at the pump as they could. In today’s world, fuel prices are back to an industry normal and the demand for hybrid vehicles is depleting – car makers like Kia and Hyundai try their hand by introducing uniquely designed cars into the market to stand out. While Toyota and Nissan on the other hand resort to using two vehicles they currently already have on the market. Question lies, does the economy really need two new crossover SUV hybrids and are they really worth the premium costs that hybrid badge comes with?

So why chose these two and not compare with Kia and/or Hyundai newest Hybrids? For starters availability, we were unable to get the new Kia Niro and Hyundai told us that the Ioniq won’t make it to our neck of the woods till later part of 2018. Besides, like step sisters, Nissan and Toyota have been pulling each other’s hair since the early years, why stop them now.

Despite both being blue, the Nissan Rogue Hybrid arrived in a consumer oriented form, the mid-grade SV model. After tacking on the SV HEV Premium package that brought in a larger 7-inch touch screen infotainment system, Bose Audio Surround Sound, Around-View Camera, Heated Steering wheel, Power Lift Tailgate and a large Panoramic Sunroof, our out the door price came to $31,625. Toyota on the other hand sent us their newest trim level, the SE, already having a $560 jump on the Rogue SV Hybrid, our out the door price skyrockets to $36,872 after quite a few unnecessary options.

Many faults lied beneath causing the Rogue Hybrid to be place second in this comparison. For starters its new-to-Nissan 2.0-liter four-cylinder combined with an electric motor masked only 176-horsepower – 6-more than its regular gas version and 18-horsepower less than the RAV4 Hybrid’s net 194-horsepower. It takes a solid 9-seconds to achieve 60 mph, 1-second more than the RAV4 Hybrid. And despite both crossover having a springy brake pedal, the Rogue’s inability to have a responsive gas pedal made it feel almost hazardous. One might say to its advantage that its lack in performance is geared toward fuel economy – and one might have to agree if its fuel numbers added up to the EPA; however, during our run we couldn’t get past the teen figures in our fuel numbers and since electric mode never seemed to work on its own, the electric motor and gas engine had to work tirelessly together to move along.

Working with a CVT gearbox made matters even worst as the power band was weak and inconsistent – it felt like we had to constantly work to build up power and with one take off the gas pedal, all that power was lost. Backed up by a lazy, numb steering wheel and an unenergetic chassis – it was just icing on the cake to its lack of driving enjoyment.

Even with the Rogue SV being the middle grade trim level, its interior is adequately fitting for the price point. While its infotainment system and navigation may have been advance technology in the early part of this decade, its cartoonish demeanor makes it is easy to use. Unlike the RAV4 Hybrid, the Rogue Hybrid has removed its option to have reclining rear seats and because the batteries take up so much space in the cargo area, its loading floor is much, much higher than the RAV4.

Over the years, Nissan hasn’t had much luck in the Hybrid game, with the fail Altima Hybrid and Pathfinder Hybrid, it goes to show that maybe they should stick to what they know best.

With the SE version coming to play in the RAV4 Hybrid’s lineup, a host of standard premium touches follows like its aggressive styling, 18-inch sport wheels, standard LED headlights with LED daytime running lights, LED taillights, and a more premium interior with a SoftTrex leatherette upholstery, sunroof, heated seats and a power lift tailgate. With our tester optioned up with $2460 Advance Technology Package, it puts its similarly equipped with the Rogue SV having a Bird’s Eye View Camera, touch screen infotainment system with Navigation, and JBL Premium Audio.

While the XLE version of the RAV4 would be more adequately appropriate to compare against the Rogue SV, the major price gap and trim level didn’t suede our verdict. The 2.5-liter four-cylinder and electric motor made for a combined output of 194-horsepower, the delivery of power was much smoother than the Rogue Hybrid and more consistent, even working with a similar CVT transmission. The RAV4 Hybrid also managed to use its EV power more effectively by switching into EV mode at lower or cruising city speeds – the RAV4 Hybrid also offers a manual EV Mode for when sneaking through the night at speeds up to 25 mph. This all added up to a much more impressive fuel economy numbers in the high 20’s, though still not reaching the EPA rated 32 mpg combined average. 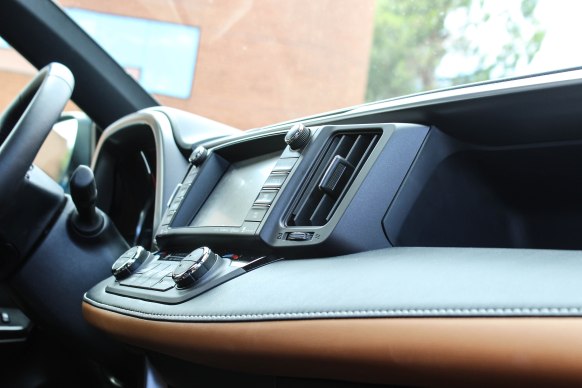 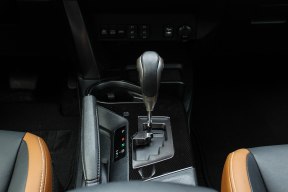 The RAV4 also performs more comfortably than the Rogue Hybrid by having a responsive gas pedal and ability to achieve 60 mph in about 8-seconds from a dead stop. Like the Rogue the brakes are spongey and incoherent and the steering is as about as enthusiastic as a kid going to detention; however, the SE model does get weighted in the steering wheel to add a little bit of something to its motions.

The interior is also outfitted more handsomely than the Rogue Hybrid – the SE brings a leatherette material on the seats that add a more premium feel. Even though the design is coming up on 4 years old now, it still looks modern and current with continuing leatherette materials and faux carbon fiber trim on the dash and door panels. And while we wish Toyota would incorporate Apple CarPlay and Android Auto support, the touch screen interface has better graphics, better touch capabilities and a friendlier demeanor.

When it comes to the latest in safety technology, the Rogue Hybrid was kind enough to offer Blind Spot Monitoring with Rear Cross Path Detection (if a car cross your path while in reverse, it’ll sound an alert) as a standard feature. However, Toyota has taken the next step in this technology by offering Toyota Safety Sense with Automatic High Beams, Radar Cruise Control, Lane Departure Warning, and Forward Collison Alert with Autonomous Braking as a standard feature across all trim levels.

We like to think that hybrid technology has come a long way. And it has over the past decade. However when crossovers like the Honda CR-V and Mazda CX-5 both get over 30 miles to the gallon, it makes us think that hybrid technology has become obsolete. It’s going to take more than 30 mpg to impressive us these days. But if you really must have a hybrid crossover, the Toyota RAV4 Hybrid is our winner in this comparison.