It’s a strange thing to wake up in the morning and think about everything that we plug and unplug on a daily basis. Having to worry about whether or not you remembered to plug in your van like you plug in your phone isn’t typically something we shouldn’t have to worry about. Yet here we are, it’s 2017, where you can now plug in your soccer mom wagon – except, it’s not the end of the world if you forget to charge it overnight.

Electric cars makes sense for a certain kind of buyer – the kind that have no problem waiting 13 hours for their car to charge and be ready for the next day. So the question we hold for Chrysler and the all-new Pacifica Plug-in Hybrid, how often will the average busy lifestyle of a minivan driver plug in and wait several hours for their van to re-charge?

But hear us out… because we think, you’ll make time for it.

Unlike any other minivan on the market, the Pacifica Plug-in is special, because it’s the only minivan to have both an electric and gas motor. But unlike a traditional hybrid system we might see from Toyota, Honda, or Ford, the Pacifica works much like the Chevrolet Volt and Toyota Prius Plug-In Hybrid. At the core, the Pacifica operates exactly like a traditional hybrid, it has a 3.6-liter V-6 at the front and is paired an electric motor and a series of batteries that make for a total output of 260-horsepower. However unlike an ordinary hybrid where the engine and the electric motor coexist to maximize fuel economy, the plug-in has a difference consensus having the ability to go long distances on electricity only before having to rely on the gas engine to kick-in. In the case of the Pacifica, a standalone charge can give upwards to 36 electric miles before the gas engine comes on giving an additional 400 miles of range on a single tank. FCA claims that Pacifica can do 550 miles total and judging by our results, we believe it.

During the day-to-day on the road drama, the electric motor provides enough kick to scoot the Pacifica along with any hitches. At full punch the electric motor coincides with the gas engine to achieve 60 mph in about 8 seconds. Once we ran out of electric juice and it was time for the two to work together, the transition between gas and electric provided a smooth changeover and never skipped a beep. Under full electric mode, it’s amazing how quiet the Pacifica is with its low resistance wheels and active noise cancelation interior.

Like any hybrid, the Pacifica’s main goal is fuel economy – considering during our week, we worked less than the 36 electric range miles, we managed to see 77 MPGe. During our 250 mile highway run however, the gas engine had to do most of the work once we lost our electric range dropping our results down to 34 mpg. None of that we are sure makes since, so in lamina’s terms, if the Pacifica Plug-in is able to do most of its daily commute on a single charge, the likely hood of having to fill up a tank could take several weeks. The only drawback is the 13-hours it takes to reach a full 100% charge on a 110v outlet where as a 240v outlet can cut that time down to 4-hours.

As one should expect the Pacifica Hybrid is one smooth riding chariot.  However, any bumps in the road sends odd crashes and feedback back into the cabin generating rattles and unwanted sounds. It’s electrically enhanced steering provides well round motions for easy maneuverability but doesn’t exhibits the driving pleasures we experienced in the base model we tested.

Two trim levels are offered in the Plug-In Hybrid, starting at $41,995. Our top-of-the-line Platinum with its $1795 triple panel sunroof crowned at $47,885. With the Platinum being the granddaddy of the Pacifica, is loaded to the nines with all sorts of extravagances that every minivan can’t live without. Most importantly though, is the now featured user friendly, rear seat dual touch screen interactive theatre system that features a host of apps including an “Are We There Yet” app as well as a variety of games in case you left the DVD’s at home. 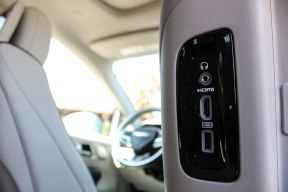 Since the Pacifica is a minivan after all, the hybrid comfortably seats 7 with its captain’s chairs. Non-hybrid versions can achieve up to 8 passengers on the lower trim levels. Our Platinum was also more luxurious than we would have anticipated having a white leather interior that was a beautiful sight. But with anything, it’s all in the details and with having a contrast blue stitching with a black outline border, this is one minivan you’ll want to be kept clean. No shoes allowed!  As luxurious has the leather is, its overall interior felt very premium and classy. The two tone dash is handsome and attractively outfitted with soft touch materials, piano black finishes and aluminum trimming around the air vents. Even with the Hybrid, the Pacifica continues to offer its infamous stow-n-go seating that fold flat into the floor.

The featured 7-inch touch screen UConnect system here is quite the undertaking system to learn. With features on top of features, everything can be controlled from this interface from the heated and cooled seats, heated steering wheel, climate control, to the deep rooted all-around view camera control. Sadly, Apply CarPlay or Android Auto has yet to be connected with this interface but can still send and receive text messages. Plus the Pacifica is never short on connectivity having a 110v outlet, 6 USB plugs as well as two HDMI plug-ins. 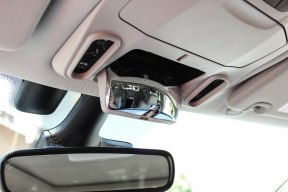 There’s a lot of factors that play in the roll of the Pacifica Plug-In Hybrid – sure it’s a bit expensive having a nearly $3000 price increase over the non-hybrid Limited. But that’s before the $7500 government rebate. Then there’s its main competitor, the Honda Odyssey, Toyota Sienna and Kia Sedona which as we know, all too has a nearly $50k price tag. It is said, for the Pacifica hybrid to make up its cost difference, it would take nearly eight years to break even – but after just one week, we already saved a $50 tank of fuel. So really it comes down to what’s worth it to you. A few extra hours of charge time verses a few extra dollars at the pumps; either way, we think the few extra seconds spent to plug in the Pacifica are worth the life long saving in fuel.