Toyota hasn’t exactly been well known for their “sporty” ventures. Even the 86 and Supra are shared products from other manufacturers. So to snap a TRD badge on the back of their mid-sized Camry is almost like putting a spoiler on the back of a minivan. The only difference is… this actually works.

To get the sportiest Camry, one had to opt for the SE and if you really wanted to feel the power at your fingertips, one would have to prepare to spend an extra 10-grand for 100-horsepower more. However, that no longer has to be the case – with some real grunt at the push of a button; the Camry TRD is more than just a flashy aero kit and snazzy matte-black wheels. Toyota essentially took an entry $26,040 SE and dropped it off at their Toyota Racing Development department and told them to have some fun.

The TRD department went to town on the Camry swapping out all sorts of components. The front brakes rotors are nearly an inch larger in diameter than the ones found on an XSE V-6, squeezed by two-piston calipers instead of the traditional single-piston units, the brakes stop hella-quicker and provide proper braking feel this time around. The 19-inch wheels just aren’t for show either – each wheel is over 3-pounds lighter and are half an inch wider than the standard 19-inch wheels. They also ride on Bridgestone summer tires that properly add extra grip. The TRD Camry also sits a little over half an inch closer to the ground with beefed up anti-roll bars, stiffer springs, and upgraded dampers that increases the Camry’s maneuverability to an almost sports car-like level. Just be careful of those in the back, barf bags isn’t a selectable option.

These adjustments are serious business when it comes to laying down handling performance. The cars overall weight transfer feels more linear. Body roll resistance is increased due to the stiffer springs and firmer underbody bracing. A V-brace behind the rear seats increases its rigid agility but also subjects the rear seats from folding as they would in a standard Camry. With upgraded wheels and suspension, the Camry doesn’t ride as firm as one would think. Its ride quality is rather pleasing with satisfying road feedback and never any signs of harshness from several deficiencies found throughout the Phoenix streets. 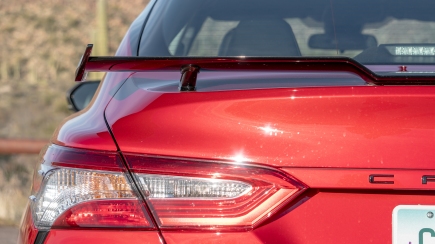 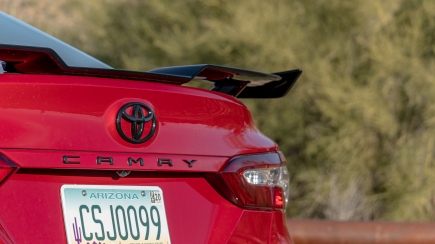 While the racing department upgraded the gooey guts, they left the part that actually moves the car alone. Petty… it could do with a retuned transmission or a few extra horsepower. Left to the traditional ways of a standard V-6 Camry, the TRD edition features the naturally aspirated 3.5-liter V-6 with just over 300-horsepower distributed to the front wheels. Snagging 0-60-mph in just over 5.5-seconds, the Camry is still plenty swift for the daily voyage and thanks to the louder TRD cat-back exhaust, we’re sure to hear every note. The 8-speed automatic isn’t anything special – it does what it does best if this was a normal car. However, given its relishing characteristics, its lack of enthusiasm is a bit disappointing from a car that went to the gym and bulked up. 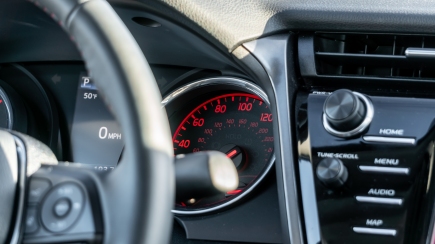 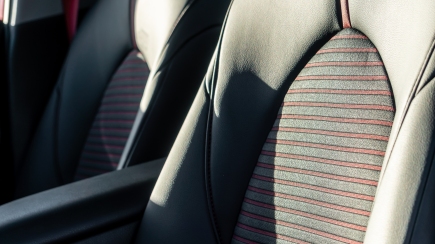 Considering all the upgrades to this TRD edition family sedan, the price is the most appealing of all things. With its V-6 engine and upgraded TRD performance, the Camry TRD starts at a whopping $31,040. And they say you can’t have your cake and eat it too…