For years, the Lexus RX has stuck to its traditional core values, two rows of premium comfort and a large cargo hole for those occasional trips to Pottery Barn. However, as the years progress, its competitors like the Acura MDX and Infiniti QX60 gain extra rows for families that need a couple extra seats.  When the RX was redesigned in 2016 to its more polarizing ways, the Lexus loyalists were dumbfounded with the RX when it was released yet again without an option to sit 7. Well, Lexus has heard, and they have officially sold out and caved in to the high-demand.

The RX is already a good-sized crossover. To fit an extra row, engineers had to be cleaver and added 4.4-inches behind the rear wheels and redesigned the roof structure to accommodate more headroom. With all that re-engineering, the wheelbase on the RX remains the same which means the rear doors haven’t been designed for rear seat access. This makes getting back to the extra row even troublesome for a small child. Luckily the second-row seats can slide forward, to accommodate additional ease of access and occupy all 23.5-inches of legroom – however, if second row passengers aren’t so kind, one will find out quickly how non-existent the legroom is back there.

There is not much difference between the standard RX350 and the RX350L – power stems from the corporate standard 3.5-liter V-6. Yet, somehow along the way the RX350L lost 5-horsepower. Instead of it being 295-horsepower, its down to 290. With the added weight in the back and additional poundage from our equipped all-wheel drive system, the RX350L loses some street cred getting to sixty miles per hour in less than 7.5-seconds.

Getting up to speed isn’t much of a thrill ride, even with sport mode engaged. Its eight-speed gearbox works effectively flowing through the gears but lacks a certain enthusiasm that would make us want to pop it into manual mode and take over. The RX350L rides quietly and softly maintaining a road etiquette that one would find in a Lexus product, it handles with ease and stops at a modest degree. Carrying the extra weight of the third row does impact fuel economy ever so slightly – we saw just about 17 mpg in the city on premium fuel.

The RX350L carries no shortage of premium stability and all the right tech that buyers are looking for. With radar guided systems, blind spots, lane keep, a power lift gate and a large 12.3-inch high-def display monitor it’s keeping pace with the industry standards. The puck mouse-like system is starting to show some of its age with its finicky controlled interface and the lack of integrated CarPlay and/or Android Auto is becoming the test of times. 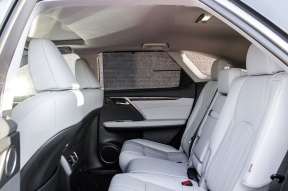 As such the RX350L is a soothing place to be. The dual pane insulated glass keeps the quiet in and the road noise out. It’s crazy comfortable with soft leather on every surface and keeps a touch of attractive wood design. The third-row accommodates a third-zone climate control system that’s inaccessible by the second row passengers – a bit odd, but at least second row occupants has heated seats and a window sunshade.

With the third-row up, cargo space is adequate, a couple pieces of carry on suitcases or modest grocery run can easily be accommodating. The third row comes standard with a power folding feature so the stress of pulling and pushing seats around is in the past.