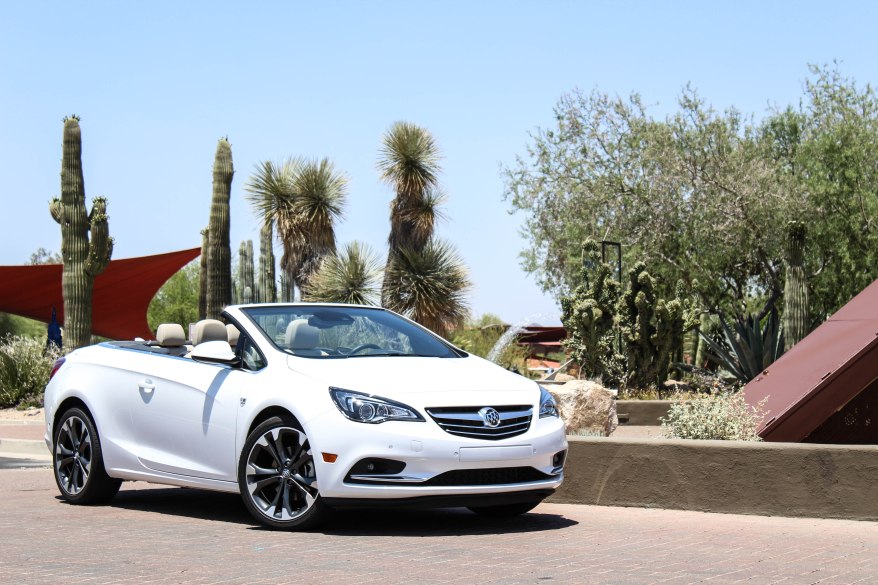 If we were to cross the 3000 miles of the North Atlantic Ocean to the other side of the pond, we’ll find another automaker…, Opel. It’s one of General Motors partnered European brands. So then it’s no secret that GM brought over one of their cars, moved the steering wheel to the correct side, slapped a Buick badge on and called it good after a hard days work.

Since the Toyota Solara and Chrysler Sebring have long left this earth… the cabriolet market has been a bit bare having been left only to the premium automakers for consumers that enjoy stock market conversations and golf. GM decision to bring over the Opel Cascada and swap badges could have been a smart move considering the only competition really lies with the Mustang and Camaro convertibles – and that’s if you’re not interested in the German cute-sized cabriolets. However GM is aware nearly all of its sales will be mostly fleet driven in states where it never gets above 80-degrees in hopes that the next time someone is in the market, they’ll consider Buick for their next purchase. Understandable.

There is a major flaw with Buicks new car however… You see Opel first released the Cascada in the early part of 2013 – now that Buick has launched the Cascada here in North America for 2016 without changing anything but the steering wheel location, its already starting to look a few years behind the curve ball.

If there is anything GM did right here, it’s not touching the styling… it sure is pretty to look at don’t you think? There are only two way a Cascada can come, 1SV or a Premium – $3000 is all that sets them apart. That extra three grand gets you the Driver Confidence Package of Forward Collision Alert, Lane Departure Warning, Front and Rear Park Assist and a other techy gizmos. Either way you chose, it comes standard with a 1.6-liter turbo-four. And on paper, everything sounds good, 200-horsepower, 221lb-ft of torque through a six-speed autobox. Sounds like a respectable recipe – if it wasn’t for one thing… its weight. Nearly 4000lbs makes it fairly plump – that’s a lot of burden for a small engine. 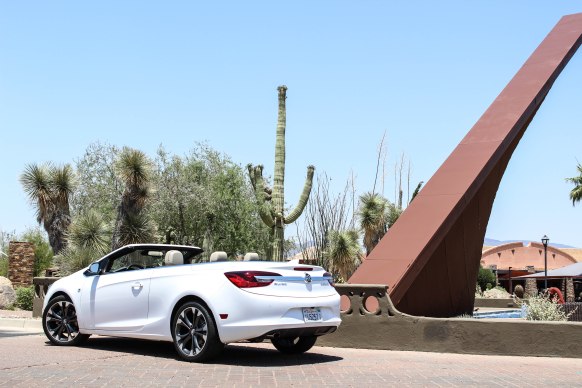 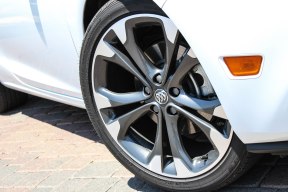 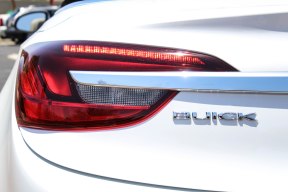 If there was one word to describe how the Cascada handles itself, it would be lazy. It’s never in a hurry to do anything. 0-60 takes nearly 8 and half seconds and the six-speed tranny has a halfhearted response. Surprisingly though, at speed the turbo here works well with the ability to overtake other motorist with minimal turbo-lag.

What makes the Cascada so heavy comes down to the chassis – it started out from a Verano, but once the roof was chopped off, strengthening beams and supports were added to provide a lot less flex and more rigidness. This makes the Cascada more solid and refined in its demeanor. Even with our Premium tester here rolling on 20-inch wheels, ride quality wasn’t sacrificed. Now if only we could feel something through the steering that would have made driving a little more entertaining since we couldn’t really move any faster than a snail sprinting.

With the Cascada being a heavy car, it can damper on the fuel economy, especially when we have found ourselves using our right foot more often to get anywhere. During our week we averaged 20.5 mpg combined on the recommended premium 89 octane fuel – just a few ticks off from the EPA. And with nearly 340 miles of range to burn, there’s plenty of country side to put some fresh air in your air.

Buick is as Buick does. The interior is slightly more upscale than one might think with leather trimmed seats, fancy black accent trims and glowing red ambient light to set the mood right. With the Cascada being a generation behind, it incorporates Buick’s previous design language and technology; therefore, you’ll have to make do with the confusing cluster of buttons on the dash, the old school digital instrument read out in the cluster, and the awkward to use 7-inch touch screen infotainment system that does not include the latest Apple CarPlay or a clear backup camera. 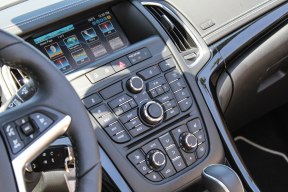 Comfort levels are never going to be an issue here as the driver and passenger have power adjustable seats with the Premium trim. When passengers trying to access the back, the front seats can power retract and reset to its previous position, but what makes this unique is that once it reaches the passengers knees, it stops, allowing some sorts of comfort level – nifty.

All it takes is about 15 seconds of your life for the roof to completely fold away – good thing you can do it while driving up to 30 mph. The Cascada is uniquely design with the windshield angled at 60 degrees which means air flow noise is minimal – with the windows up we found we could have a normal conversation with a passenger or over the phone. With the roof completely up, the interior cabin is isolating for any major city noises and well insulated, keeping the heat out and cold in.

For the purpose of a weekend rental escape, the Cascada makes a fine choice when selecting between a Mustang or one of these. You’ll have to put your luggage in the back seat, but that’s a sacrifice with any convertible. But as something to live with every day, perhaps the Audi A3 or BMW 2-series convertible would be more suitable.