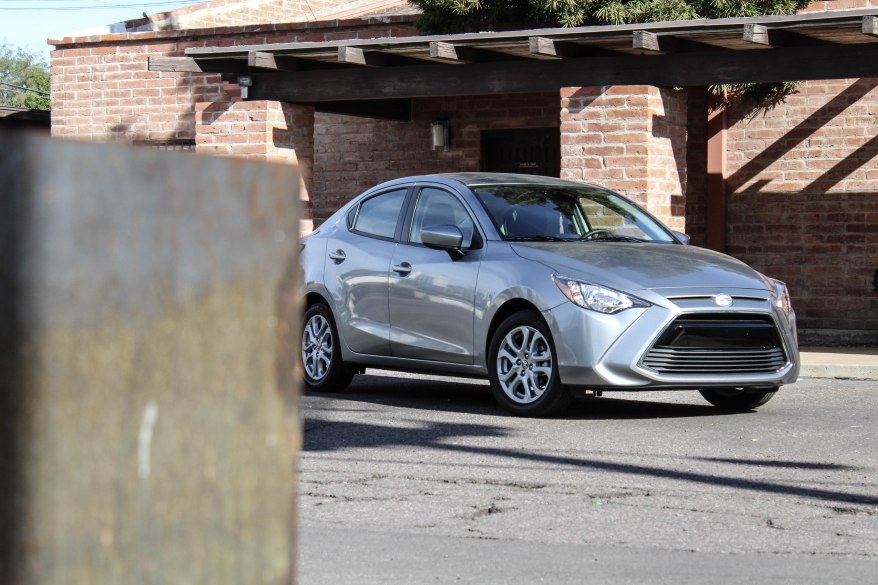 The term “entry level” is usually code word for something bare bones basic. However in today’s world, “bare bones” isn’t exactly what it used to mean. I mean, cars now come standard with power door locks, windows, and side airbags – those used to be options. Even a manual transmission has to be by request and dug out from the back lot – assuming the dealer even has one. With Scion having paired up with Mazda on their new entry level iA, things aren’t so bare as they seem to be.

A while back we took a look at the Scion iA, we went in with little expectations and came out the other end satisfied with the results. Now we’re ditching the $1100 optional six-speed automatic for the third pedal and the shift-for-ourselves function.

An entry level car, comes with an entry level price – $16,495 after $795 for handling fees. But for that price the iA is pretty well packaged: power locks, windows, and side airbags… that’s our attempt at a joke. For an entry level sedan however, the iA does feature some pretty cool gadgets at the price its offer like push button start, touch screen infotainment system, and a low speed pre-collision warning.

Since the Scion is essentially a Mazda 2 with different badges, the chassis is what puts this Scion at the top of the compact food chain in terms of drivability. For a compact it has good composure. It rides well on its 16-inch wheels and provides the driver with excellent feedback through the nicely weighted steering wheel. 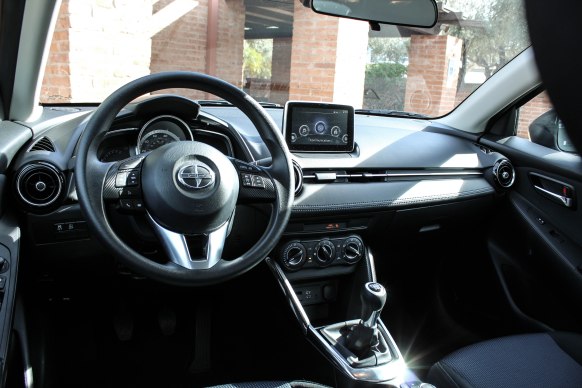 When we tested the autobox, it was decent for its class, it was responsive and eager. But now with our six-speed manual, things are a lot more engaging and involved. The gear changes are short and smooth – it glides through the motions effortlessly with the use of a nicely weighted clutch. However, you will have to go old school and shift by sound since the tiny tachometer is hard to read and glares in the sunlight. First to second gear does come off a bit robust at first, but after all, it’s about finding that sweet spot in the clutch.

Now don’t go thinking this is a quick little sedan though, even with a manual tranny here it pulls 0-60 in just under 10 seconds from its tiny 1.5-liter, 106-horsepower engine. No matter how good your shifting skills are. It’s a buzzy little engine but it sure does like to rev which makes it energetic and entertaining. Build up the revs and it acts like a toddler at the end of a slide saying “let’s do it again.”

Sometimes, manual transmissions can be a pain on a day-to-day bases – which is why most people opt out of that extra pedal. With the Scion, the manual was never really an issue. Everything worked well together to provide a comfortable driving experience. The suspension managed the road imperfections with ease, but also allowed dramatic responses without having too much body roll. The feedback from the steering wheel was enlightening and encouraging to be a little more aggressive. And even the driving position was decently comfortable. It made for a car that can be fun to toss around a Wal-Mart parking lot without having to resort to track day fun – then again, if you buy an iA you’re probably not going on a track.

So then there’s the elephant in the room, its looks. When it debuted, it was controversial. But I don’t know now… maybe it’s growing on us… maybe we’ve moved on to complain about other things – but we don’t mind it any more. It stands out, turn’s heads – even in this overly generic silver paint it has a sharp appearance about it. Even the interior is well executed – the seats are comfortable and there’s room to move about… maybe not so much for rear passengers, but maybe they should’ve called “shotgun.” A center armrest would have been nice though and some more storage. But we got better things to complain about.

Entry level these days has a whole new meaning to the compact car world. With cars like this Scion iA, it’s good to know there is still some “fun” factor out there to be had in something that won’t break the bank or your wallet.