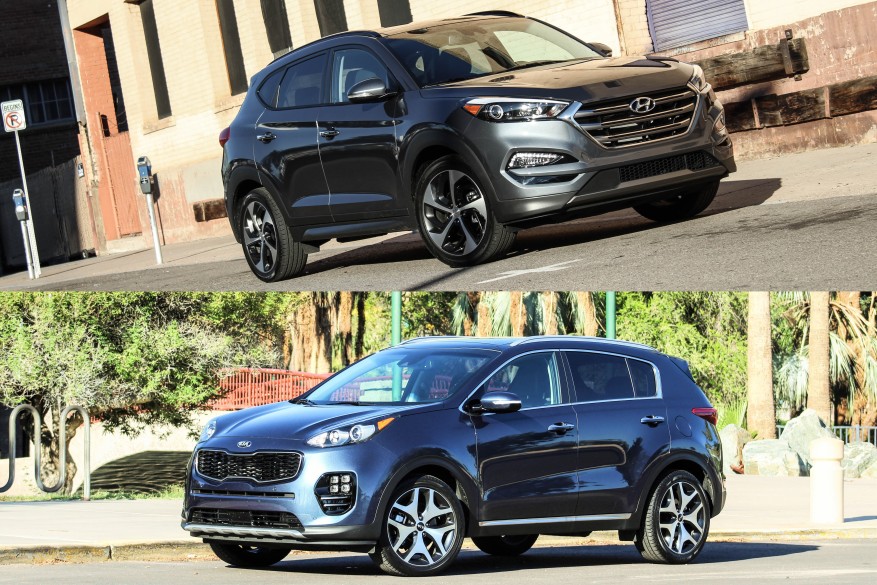 We’ve been hit with an “O” factor – and its spreading faster than the bird flu epidemic of 2009. Hyundai and Kia are these “O” diseases with responses of “Ooohh, that’s a Kia?” or “Ooohh wow, that’s pretty nice for a Hyundai.” Now they have taken over the market and there is no cure… but that’s okay, you won’t find us complaining.  This is one epidemic we don’t mind having around for a while.

Both Kia and Hyundai have made a name for themselves since their erratic design schemes in 2011 that put them on everyone’s radar. Since then they’ve done nothing but grow into a premium brand that customers are falling in love with. But like any sisters, there is a family feud for the most attention…

When it comes to crossovers, there are several major attributes that come into effect. Like most crossovers, the Hyundai Tucson and Kia Sportage have everything you’d expect – plentiful cargo capacities, split folding rear seats and enough cup holders to find melted chocolate in. Both of our samplers arrived wearing their high priced – the Hyundai Tucson coming in with a Limited badge, All-Wheel Drive and a sticker price of $35,070 and the Kia Sportage riding in on a front-wheel drive stallion flashing it’s SX label and price tag of $33,395.

Kia is all about being that little devil on your shoulder when trying to choose the right passage. Hyundai generally follows the guidelines of “you’ll get their eventually” with more fuel conscious economical ways, while Kia is all about getting their thrills with a sinful smirk, turbocharging their bigger engines, fitting them with a stiffer suspension and a more tantalizing driving demeanor.

While generally we prefer the devil to ride shotgun on any of our shoulders, as sport utility vehicles go, the Kia Sportage didn’t quite have the trick up its sleeve we were looking for.

There is nothing wrong with Sportage per say. It has all the right characteristics of a sport utility vehicle. It provides a comfortable atmosphere with adequate room for all occupants, the trunk space was commodious and even with the cabin being filled with all the natural light in the world from the panoramic sunroof, there was even plenty of headroom. The Sportage is also loaded with technology on the top spec’d SX trim level featuring a large touch screen infotainment system with navigation and back-up camera, heated and cooled front seats, dual-zone climate control and a heated steering wheel. Safety was also a major concern being equipped with Blind Spot Monitoring, Adaptive Cruise Control, Lane Departure Warning, and Forward Collision Alert with autonomous braking.

Fit and finish throughout the Sportage was fantastic, something you’d expect from an upscale German crossover. Everything had a solid presence and tactile feel. And it was all laid out in a very tasteful, handsome manner that was simple to navigate and understand. We even like the way it looks, which can be a bit odd at times. But it’s funky, and different, and we like that. It has fat 19-inch alloys, dual tip chrome exhaust, and LED daytime lights with HID adaptive bending headlights.

If we like it some much, what could be wrong? Even though the Kia Sportage’s 2.0-liter turbocharged engine is much more powerful than the Hyundai Tucson, by delivering 240 of them. Its how the power is delivered. Being a front wheel drive platform, there is a lot of stress on the front wheels… they handle the steering, the braking, and then you throw 240-horsepower at it and it requires some clever engineering.

Power is transmitted through a six-speed automatic transmission, though not efficiently. At first acceleration there is turbo lag, a hesitant feel of no power. Then when the turbo kicks in, we fight with the steering wheel to control that lump of thrust when it hits, causing torque steer. Once everything is managed, it can pull up to 60 mph in about 6 and half seconds – quicker than the Hyundai Tucson by about 2 seconds. However, with performance comes responsibility… and lets face it, we have the devil on our shoulders, there is no responsibility. Therefore we managed to only average 20 mpg verses its rated 23 mpg combined average and go 350 miles on a single tank.

It’s a crossover for the witty drivers who enjoy a good drive – but for that we’d recommend the Kia Forte5 or the new Soul Turbo if you want crossover room with the satisfaction of some cheap thrills.

Hyundai’s moto has always been about sensibility. Getting a sensible, inexpensive car for the right price. However, considering it is the most expensive one in this comparison, there really isn’t anything cheap about Hyundai anymore… and for good reason. Hyundai has really stepped up their game this past decade to compete and fight against the unruly Japanese product lineup and their long lasting life spans. To stand out they created a product that shocked the word – everything they had was different and unique. This put their foot in the door and now that all eyes are on them, it’s time to be serious. Thus a whole new corporate brand and mentality.

$35k is a lot to ask for in a compact crossover especially one that has extremely conservative attributes and a smaller 175-horsepower 1.6-liter turbocharged engine. So then why do we like it so much if it’s not as powerful?

Just about everything…. There wasn’t really anything we could pick apart. Even though the power train is down from the Sportage, the delivery of power is much more linear and effective. Sure it takes an additional two seconds to 60 mph – but that’s only 8 seconds total – and when you’re in a compact crossover, are you ever really that much in a hurry? Be honest! Power is also delivered through a more properly engineered seven-speed dual clutch transmission and a clever all-wheel drive system. It makes driving and acceleration much more smoother and the transmission behaves a little more properly. This also meant we were able to be more sensible on our fuel averaging 24 miles to the gallon and the ability to go 70 miles further up to 420 miles on a single tank.

The interior is on the conservative side – and that’s the direction Hyundai is going. Like the Kia however, everything is attractively executed. The fit and finish is extremely well done and the overall cabin space is calming and inviting. Our sampler didn’t spare on the options lists having much of the similar options of the Sportage from the panoramic sunroof, navigation, leather, and an insurance of safety features to always keep you worry free.

Looking pretty makes a big statement but also comes at a cost – the 19-inch alloys are a nice touch to the ecstatic but make for an uncomfortable ride quality. The bigger wheels also brings in more road noise into the cabin.

While these two may share similarities in every division but performance, they are worlds apart and reach out to two different kinds of consumers. In a crossover however, if we wanted something fun to drive, we’d get a hatchback, therefore, the Hyundai Tucson declares our victory.