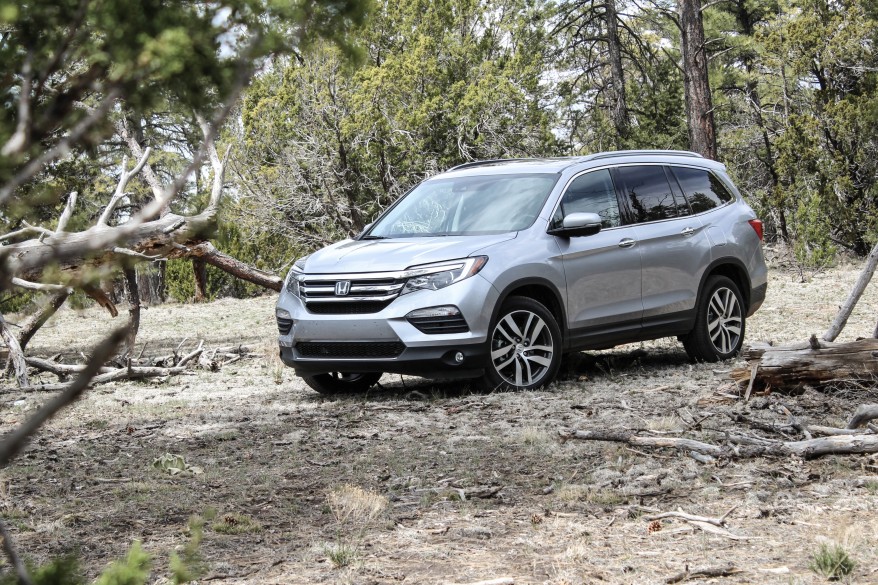 As someone involved in the automotive world, we constantly get asked the same question, “Which is a good car?” A couple of weeks ago I was asked this very question by a father of two – looking for something with three-rows, capable of back woods camping, and looked cool (that last one is a tough order). I told him to wait and I’ll get back to him as there was a 2016 Honda Pilot on schedule and when it comes to family versatility, the Pilot has been making quite the name for itself lately.

Competition is fierce in the large three-row crossover segment, the list of crossovers just piles up with the Ford Explorer, Toyota Highlander, Chevrolet Traverse, Nissan Pathfinder and the Hyundai Santa Fe (7-passenger) – the Pilot has a lot of living up to do, and just by the looks of things, we’re not disappointed.

Granted, our sampled Pilot arrived as loaded as one can get, an Elite. Swanky. It stickers out at $46,420 and comes with everything conceivable from dual sunroofs, DVD entertainment, to all the safety gizmos you can think of. The Pilot starts out in life $30,145 with each trim offering an extra set of goodies till you get to the Elite.

On paper, silver is silver, no matter what elegant name you call it. We don’t like silver, but here it actually looks good – it articulates the Pilots curves and with the black cladding below it presents some handsome architecture. Even though this is top trim, you can expect standard LED daytime and LED taillights across all trim levels – however our Elite had LED headlights and massive 20-inch wheels to fill in the large wheel wells. 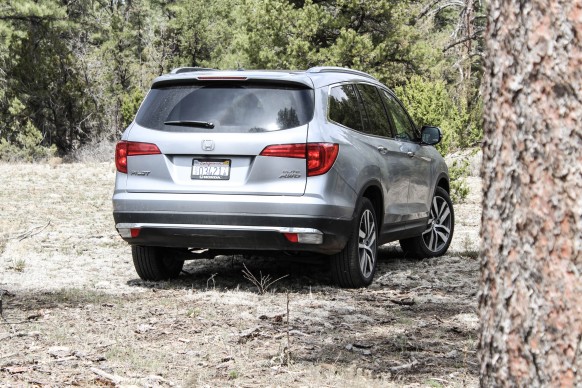 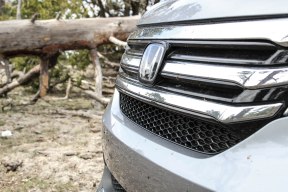 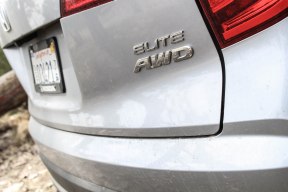 All models come standard with a 3.5-liter V-6 with an output of 280 horsepower and 262lb-ft of torque. On lower level trims a six-speed auto is standard – on our Elite and also on the Touring comes a new nine-speed automatic with push-button select shift. Nine gears is a lot to shuffle through, especially when it weighs just over 4300lbs, but it hustles to 60 mph in just over six seconds. During the run of the mill traffic, the nine-speed here works well, shifts smoothly and maintains efficiency – at least we assume with the green halo around the cluster. When it comes down to quick maneuvers however, it takes some time to find its way to the right gear. The push-button select shift that comes with the nine-speed has received some bad rap for having a slow response time – I’d have to disagree. It takes no more time to grab a lever and select a gear then to push a button and wait half a second for it to engage. Now I’ll admit, it’s not necessary here, it’s not saving any space and look bizarre in this vast cabin.

Rolling on 20’s you’d think a ride quality would be lost. However even we were mistaken. The Pilot has no compromise when it comes to road quality – it’s polite and well mannered. The chassis present a strong, solid presence in its demeanor. Things are quiet from inside the cabin thanks to sound insulation and there is just enough suspension feedback to remind us we’re on a road. Things even get a bit sassy when we put the transmission in sport mode and used the stainless steel paddle shifter – the engine articulates a pleasant growl and we could feel the V-TEC kick in around 5000 rpms. 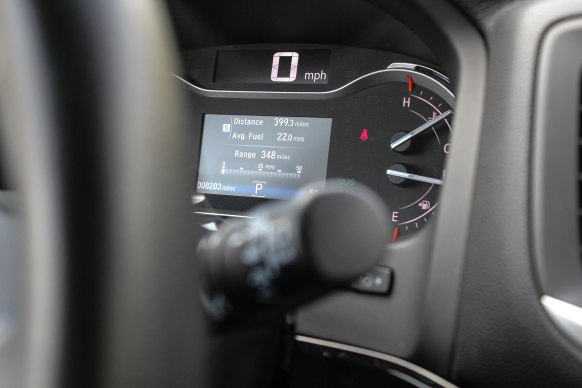 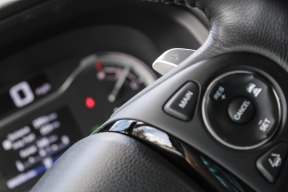 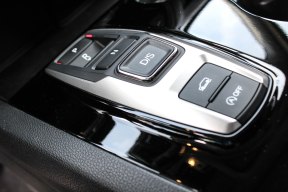 It is all business upon entering the dark cabin. Our black leather will be favored by moms (and dads) everywhere. The contemporary design keeps up with the modern influences from other brands. It’s silver and piano black trim is nothing new but helps break up the dashes design cues. Our sampler had the large 8-inch touch screen interface – having gone completely buttonless, there is a learning curve to using the system and when it comes down to changing something as simple as the volume or radio station, it becomes a driving distraction – but hey, that’s what the buttons on the steering wheel are for… right?

Seating for seven is the only way to go in a Pilot, and that brings in second row captain chairs and an easy access button for third row accessibility. Being a larger person myself, the easy access is… easy and the third row is found to be moderately comfortable… for a short period of time. With the ability to slide back-n-forth, second row passengers can be kind to allow leg room for the third row occupants or be selfish and hog the leg room for themselves – seating position is on the low side for adults, but will work better for kidos in the long run. Front row driver and passengers get the ultimate delight however with tremendously comfortable multi-way power adjustable seats with heated and cooling ventilation on our Elite. The tri-zone climate control allows rear passengers to control their own temperate while enjoying a good movie on the rear seat DVD entertainment. 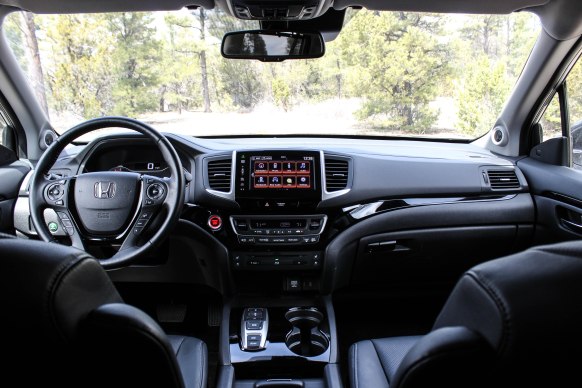 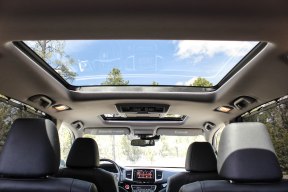 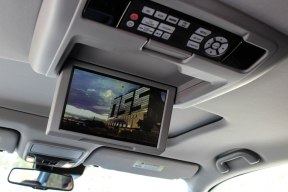 Technology is huge in the car world and the Pilot has no shortage of featuring the latest tech in safety – adaptive cruise control, blind spot monitor, lane departure warning, lane keeping assist, forward collision alert, and forward collision autonomous braking work wonders here at keeping family safe. Some systems can be intrusive and annoying at times causing us to disengage the system entirely. The Pilot managed them quite well not interrupting the driver and being subtle in its response – we did get annoyed at the forward collision alert coming on every time someone cut us off however.

Averaging 23 mpg is a shocker with a large three-row crossover, especially when the EPA rates the Pilot for only 22 mpg combined. And with fueling on 89 octane gas, though regular 87 fuel is just fine, we managed to squeeze 420 miles from its fuel tank.

As with any crossovers, there are its ups and downs and can be hard to choose the right one. Compared to other large utility vehicles the Pilot was the right size, at least for us – it was easy to maneuver around town, park in tight spaces and had an excellent turning radius. Sure it could use more storage and the infotainment system is not user friendly, but all-in-all, the new Honda Pilot is one fine family hauling machine.